Whether it was a World War II-era c-ration or a Vietnam-era MCI, it wouldn’t have been “dinner” without something to open up the cans. Enter the P-38.

A great site on the P-38 is located here. Taken from that page:During WWII when hungry GI’s were ready to dive into that delicious meal of C-Rations, they used their trusty P-38s to open the cans. No it wasn’t a WWII fighter plane or a pistol, it was an amazingly simple 1-1/2 inch stamped metal gadget that was developed by the Subsistence Research Laboratory located in Chicago during the Summer of 1942 and unbelievably in just 30 days.

It’s official designation is ‘U.S. ARMY POCKET CAN OPENER’ or ‘CAN OPENER, KEY TYPE’, but is known more commonly by its nickname which it supposedly acquired from the 38 punctures required to open a C-Ration can. It’s also known as a “John Wayne” by many because the story goes is that he demonstrated using them in a WWII training film, so when soldiers would ask for one if they forgot the name they would ask for a “John Wayne”. Originally they came in individual paper packets with the directions how to use printed on it, and about a dozen came packed with a case of C-Rations. Unopened Vietnam era vintage P-38s still in their original paper wrapper are hard to find so if you find one resist the temptation to open it. These handy little gadgets have adorned dog tag chains and key rings ever since.

Another great site for P-38 information is Dog Tags R Us This site has two sections on P-38s: P-38 Information and P-38 Articles and Testimonials. 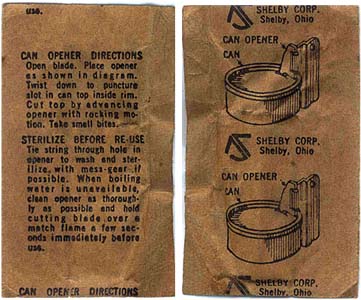