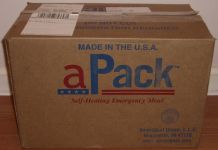 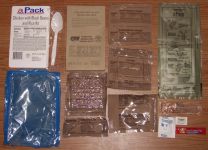 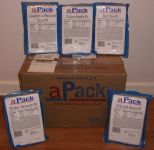 Ameriqual is one of the three companies that produce MREs for the U.S. military. In fact, they’re the largest providers of MREs. After years of being out of the civilian MRE market, in 2006, they finally came out with a product called “APack Ready Meals”.

According to Ameriqual’s APack website, their civilian MREs are called “APacks”. But their cases (see below) say “APack”. I’ll stick with what the case and the MREs say for now.

With the exception of the beverage mix, all the food components of the APacks are the same as what is found inside the regular military MREs. The spoon is different from the military MRE spoon – this one is shorter but wider. So wide, in fact, that it is easy to wolf down an entire entree in just a few spoonfuls. See the spoons section on the Civilian MRE Comparison page for more information.

The APacks do not contain an accessory pack – the spoon in wrapped all by itself and the moist towelette, pepper, and drink mix are floating around freely in the bag. Strangely, Ameriqual does not include a napkin in the meal bag. If you are used to using the napkin to protect your hand from the scalding hot heated entree, you will have to improvise something else for protection. 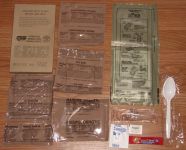 APacks come with a Flameless Ration Heater (FRH) that looks exactly like the military version with the exception that it has to be activated by salt water (a packet of which is included in the meal bag) instead of just plain water. Because the standard FRH can be activated by regular water, they are considered hazardous materials and can only be shipped via ground transport. By changing the FRH formula to require salt and water to activate, the APacks do not fall under those restrictions.

A case of APacks comes with 12 individual meals. There are usually six different menus in each case so you get two of each menu. The menus from Ameriqual appear to be set for now so every case should contain the same menus. Here are the six main entrees: Beef Stew; Spaghetti w/ Meat & Sauce; Chicken, Noodles, & Vegetables; Chicken Tetrazzini; Chili w/ Beans; and Chicken w/ Beans & Rice.

Here’s a full menu listing from a case of APack meals that were packed in April, 2006:

While you can find Ameriqual at Ameriqual, the APack civilian MREs can be found at Ready Meal. Official APack picture (this isn’t what my case looked like): 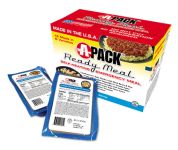 APacks are available at Ameriqual’s site listed above and also from these two reliable dealers: 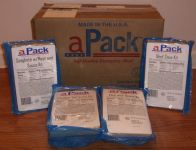 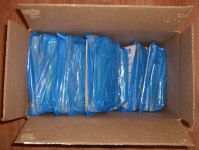