The British use a ration called the 24-Hour Operational Ration Pack. Previous versions of this ration were called the ration packs (GS for General Service). Those rations included a lot of food in cans. By 1999, the GS rations were phased out and the newer GP (General Purpose) ration packs became the primary operational ration pack. 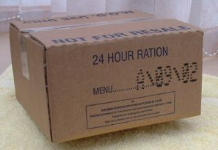 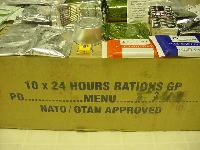 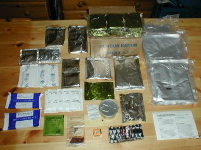 Features of the 24-Hour operational ration pack are:

The breakfast, main meal and dessert rations are of the boil-in-a-bag (retort pouch) variety and can be heated up by submerging them in boiling water heated up on a Hexamine Stove (see below). The soup and drinks are in instant and/or powdered form.

One useful feature of the GP rations is on the box itself. As you can see from this picture, each box has a target and range card printed on the side. 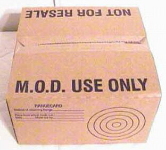 British soldiers are issued Hexamine stoves, also called Tommy Cookers. These pocket-sized, foldable, solid fuel metal stoves use blocks of hexamine for fuel. These stoves be can used to heat up water for coffee/tea and to warm up the entrees. They also come with an adapter to hold a metal mug/canteen cup. These stoves are similar in design to the European Esbit stoves but are larger and come with different fuel. They come issued in a brown paper wrapper with 8 fuel tablets in a waxed box. The standard issue is one cooker every three days but with fuel refill every day. The fuel with these is very toxic, smells dreadful and very difficult to light as it is very waxy. Despite all this the smell of it on a cold morning is beautiful!

Some of the pictures show the mug adapter, which fits on the top and holds the relatively new issue “Crusader” metal mug. The normal issue mug that comes with the water bottle is plastic and fits on top of the bottle. The metal “Crusader” mug fits underneath the bottle. 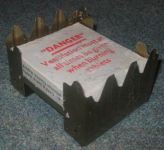 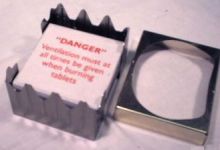 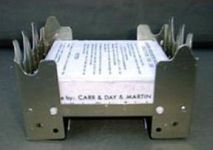 Official information about British ration packs can be found on the Ministry of Defence web here. Here is one user’s report as to the contents of a 2001 British ORP:

Here is an article on British rations that appeared in The Daily Mail on April 9, 2004 (click for a larger version). Here’s some more information found here. And here’s an older menu sheet (one in every GP pack, to be found in the drinks/sundries pack). 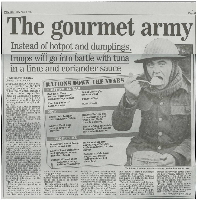 In addition to the pouched foods, you also get 30-odd separate packs of one sort or another: