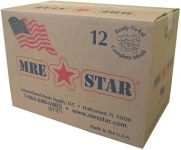 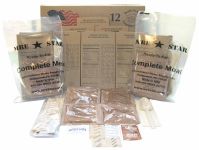 International Meals Supply is unique in the civilian MRE industry in that they do not produce MREs for the U.S. Government like their competitors do. But IMS is a certified supplier of emergency rations for the Department of Defence/Defense Logistics Agency, Defense Supply Center Philadelphia. The MREStar MREs were introduced in 2006. Even though the product offering is young, it has already set itself apart because of its unique choice of entrees. Four of their six entrees are completely new but even though the other two entrees have familiar names (Beef Stew, Cheese Tortellini), they definitely have improved flavor.

IMS produces everything inside the MREStar MRE with the exception of the bakery goods (shortbread cookie). The accessory pack is more complete than others in that it contains everything you would expect – spoon, moist wipe, napkin, instant coffee, creamer, sugar, salt, and pepper. The spoon is different from the military MRE spoon – this one is shorter and wider. So wide, in fact, that it is easy to wolf down an entire entree in just a few spoonfuls. According to MREStar, the larger spoon size was actually requested by the DSCP so the food could be consumed faster by military personnel. See the spoons section on the Civilian MRE Comparison page for more information. 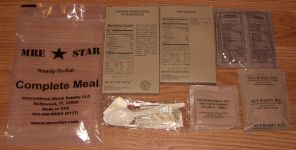 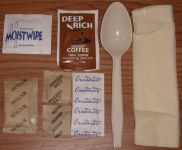 A case of MREStar MREs comes with 12 individual meals. There are usually six different menus in each case so you get two of each menu. The menus from MREStar appear to be set for now so every case should contain the same menus. Here are the six main entrees:

Here’s a full menu listing from a case of MREStar MREs that was packed in October, 2006:

Official MREStar Entree and Side Pictures

MREStar MREs are available at their site listed above but better prices can be found through their dealers online: 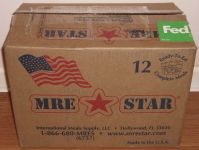