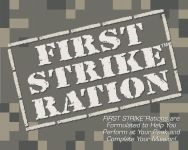 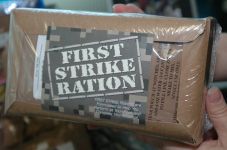 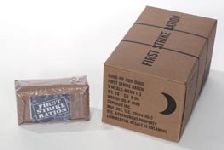 The First Strike Ration, or FSR, is a compact, eat-on-the-move assault ration designed for use during initial periods of highly intense, highly mobile combat operations. The FSR is substantially reduced in weight and size and enhances soldier consumption, nutritional intake, and mobility.

The development of the FSR came from the fact that prior to deployment, soldiers would “field strip” their MREs. Field stripping involves removing all the excess MRE packaging and unwanted items – bags, boxes, heaters, extra spoons, accessory packs, etc. Creative field stripping could reduce 3 MREs – one day’s worth – down to the same size as a single MRE. While this practice reduced the soldier’s load by only packing the most critical MRE parts, it also led to increased waste and a reduced consumption of food. A single FSR, which is 24 hours worth of food, is approximately 50% the size and weight of three MREs. 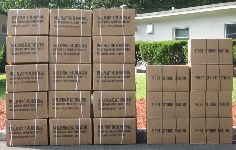 As designed, all the components of an FSR can be eaten with little or no preparation. Pocket sandwiches, applesauce, energy bars, crackers, peanut butter, and beef jerky can be eaten as is while drinks can be mixed with water and consumed directly from their pouches.

These are pictures of an early prototype of the FSR design: 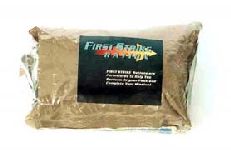 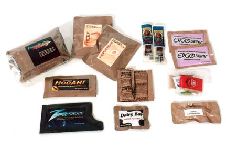