Whether you have a whole case of MREs or just a single MRE, there are a number of ways to figure out how old they are.

All MRE cases have some sort of MRE date code on them that you can use to determine when they were packaged. A typical case will have both a packed date and an inspection date. The inspection date on MREs is usually three years after the packed date.

Here are a couple of cases of MREs with the date packed: 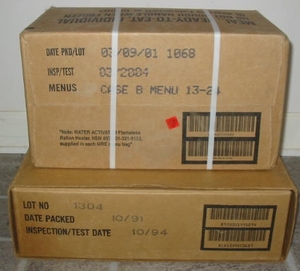 Before we get into dating whole MREs, it’d be easier to explain how to date individual MRE components. Almost every component that goes into an MRE has a date code stamped on it in the form “0132” (see above explanation). Everything from entrees, crackers, peanut butter, accessory packs, etc. – they all have a date code. If you can open up your MRE, you should be able to figure out how old each piece is.

Here are some examples of date codes stamped on various MRE components:

It can be more difficult to date individual unopened MREs because until 2003, date codes weren’t stamped on the actual MRE bags themselves. Without actually opening the MRE bag and looking at the MRE date codes stamped on the components, there are a few tricks you use.

If the MRE bag is dark brown, that means your MRE is from 1995 or earlier. In 1996, they switched over to the tan-colored bags. To get a better idea of the MREs age, take a look at which MRE you have. If you have a #8 Ham Slice, you’re out of luck because that could have come from 1990-1995. See this page for a complete list of MRE menus.

Similarly, if you have a brown #6 Chicken Ala King, you can tell from the menu list that the last time that MRE was used was 1992 – so yours could be from 1992 or earlier.

The same sort of theory works for the newer tan MREs. Look at which menu # the MRE is and then look at the menu listing to see if you can nail down a closer date.