Officially, how long MREs last depends on how long and at what temperatures they are stored. At a minimum, they should last 1 month when stored at 120 degrees Fahrenheit (49 degrees Celsius). Or they could last 5 years at 50 °F (10 °C). Here’s the most current time and temperature chart as of 2010: 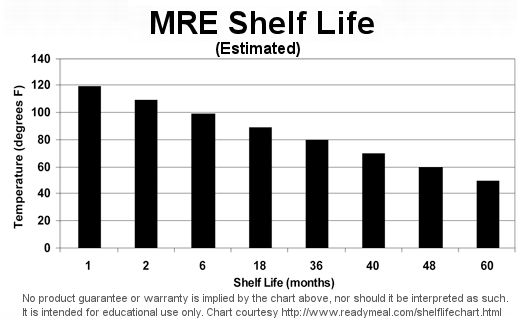 Say “No” to the Old MRE Shelf Life Chart

Another MRE “Time and Temperature” chart like the one to the left can be found on the Internet. This chart was developed in the 1980s when the MREs first came out and projects up to 130 months of storage at 60 °F. These first MREs had a number of freeze-dried components that accounted for the longer projected shelf life. But civilian and military MREs today no longer use freeze-dried components so their shelf lives follow the newer chart above.

Since about 1997, MRE cases have also included something called a TTI (time and temperature indicator) on the outside of the box to assist inspectors in determining if MREs are still good. There are two parts to the TTI – an outer dark circle and an inner light circle. As long as the inner circle is still lighter than the outside circle, the MREs are supposed to be good. Click here for the official info on the TTIs.

The average numbers I hear a lot for MRE freshness are 3 years at “normal” temperatures (80 degrees F). I’ve also heard 10 years if they’re stored in cool conditions. But that’s it for the “official” information.

Practically, the darn things last a long, long, time. As long as the individual MRE components aren’t damaged, punctured, (or swelling!), they should still be edible. Some people (on usenet) say that an MRE may lose its flavor or turn an unappetizing color but will still retain all the nutritional value. But other people will say the nutritional value decays over time. Take your pick of opinions. If you want to really be safe, don’t base your nutritional health on 10-year old MREs. But for occasional eating or camping, you’re probably ok.

But how do they really taste? I’ve eaten everything from one month old MREs to 11 year old MREs. While I haven’t been brave enough to try the 10 year old Omlette with Ham, I have tried the 11 year old corned beef hash and the 11 year old ham slice/potatoes au gratin. They were both perfectly yummy (if you like those kinds of foods). The ham slice was nice and tender – more like Hormel’s Tender Chunk Ham. The corned beef hash was like any can of corned beef hash I’ve ever eaten. All the other MRE entrees I’ve tried – from 1994, 1998, 2000, 2001, 2002 have all been good – no sort of off-flavors or bad tastes.

But other MRE components might not fare so well over time. Two examples spring to mind: the cheese spread and the applesauce. The DSCP (Defense Supply Center Philadelphia) did some time/temperature testing on these two items and were kind enough to provide the following pictures:

Click on each picture for a full page showing all the various times/temperatures.

As you can see, both the cheese spread and applesauce go downhill pretty fast. If I had to guess, I’d say the cheese and fruits (non-dehydrated) won’t make it 6+ years but the peanut butter, crackers, pound cakes, nut cakes, etc. will make it (yes, that 11 year old maple nut cake was pretty tasty).

If you’re interested, the DSCP has online guides for inspecting each and every component that goes into an MRE.