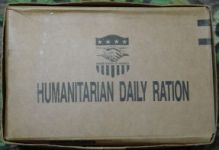 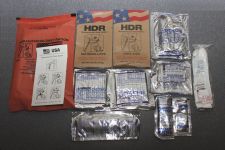 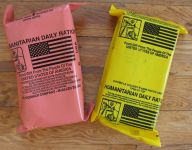 HDRs are a spin-off of MREs. They were developed as a means of feeding large populations of displaced persons or refugees under emergency conditions. A single HDR is designed to provide a full day’s sustenance to a moderately malnourished individual (as opposed to MREs, where you need three per day to feed a soldier in the field). HDRs also differ from MREs in that they contain no animal products or by-products so as to be acceptable to a wide range of consumers with religious and dietary restrictions. Each HDR contains 2200 calories.

The long story (as taken from the DSCP’s HDR page):

Humanitarian Rations were implemented in response to customer requests for specific feeding requirements for large groups of people. These rations are packaged such as to withstand extreme environmental conditions and to allow air drops when necessary.

What is it: The original requirement for the HDR was based on a need identified by the Defense Security Cooperation Agency-Humanitarian Assistance/Demining Activities (DSCA-HA/D), for a means of feeding large populations of displaced persons or refugees under emergency conditions. The HDR is similar in concept to the Meal, Ready-to-Eat as it is composed of ready-to-eat thermostabilized entrees and complementary components and is packaged in materials structurally similar to the MRE. However, the similarity ends there.

The components are designed to provide a full day’s sustenance to a moderately malnourished individual. In order to provide the widest possible acceptance from the variety of potential consumers with diverse religious and dietary restrictions from around the world, the HDR contains no animal products or animal by-products, except that minimal amounts of dairy products are permitted. Alcohol and alcohol based ingredients are also banned. The meal bag is similar to the MRE meal bag except that it is a salmon color and it contains graphics demonstrating how
to open the bag and that the contents should be eaten. Again, the shipping container is the same as the MRE, except that it holds ten meal bags and contains markings and graphics specific to the HDR.

What’s in it: Since the meal is designed as a complete day’s supply of food, a minimum of two entrees is provided in each meal bag. Complementary components are also included to provide the balance of the daily nutritional requirements that call for not less than 2200 calories, broken down as 10-13% protein, 27-30% fat, and not less than 60% carbohydrates. A spoon and a non-alcohol based moist towelette are the only non-food components in the meal bag.

How do I eat it: The entire meal is ready to eat. The entrees may be eaten cold, however, as is universally understood, the entrees generally are more desirable when heated. The entree package may be immersed in hot water or the contents may be placed in a pot for heating over flame.

How long will it last: The shelf life of the HDR is 36 months at 80 degrees Fahrenheit. 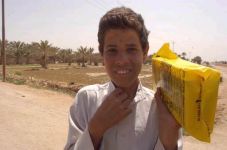 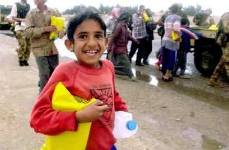 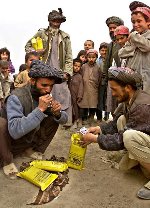 There are five different menus of HDRs. With a case of 10 HDRs, you’ll have two of each type of HDR available. Depending on the the HDR manufacturer (Ameriqual, Sopakco, or Wornick), each HDR type could have one of three lists of contents – A, B, or C. For example, if you had a case of HDR, you would get 10 HDRs – two from each menu. However, it’s a toss-up as to whether (for example with Menu 1) you’d get Bean Salad, Barley Stew, or Beans & Rice. This was a little confusing for me at first – just by looking at the menu, you’d think each HDR bag would contain meals A, B, and C. But I can assure you that’s not how it works.