On January 27, 2009, Sopakco, In. released the following recall for their Sure-Pak 12 civilian MREs:

FOR IMMEDIATE RELEASE — Mullins, SC (January 27, 2009) — SOPAKCO, Inc., of Mullins, South Carolina, is voluntarily recalling certain Sure-Pak 12 Meals because peanut butter packages in the Meals may have the potential to be contaminated with Salmonella.

Salmonella is an organism that can cause serious and sometimes fatal infections in young children, frail or elderly people, and others with weakened immune systems. Healthy persons infected with Salmonella often experience fever, diarrhea (which may be bloody), nausea, vomiting and abdominal pain. In rare circumstances, infection with Salmonella can result in the organism getting into the bloodstream and producing more severe illnesses such as arterial infections (i.e., infected aneurysms), endocarditis and arthritis. 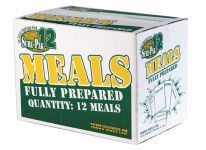 Customers who received any products affected by this recall will be contacted directly by a SOPAKCO customer service representative. Customers with questions or concerns about the recall may contact SOPAKCO at 423-278-1437 for further information on what to do with the product.

Regardless of whether you have the type of packet above or the military-style packet, if you have a case of Sopakco Sure-Pak 12 MREs from the affected lots numbers, you should contact Sopakco immediately.

In the case of Sopakco Sure-Pak 12 MREs, the lot number is the same as the “date packed” or date of manufacture. These datecodes can be read as ordinal numbers where the first number is year and the next three numbers are the day of the year. So a datecode of “8261” would indicate a year of 2008, day 261 – or September 18, 2008.