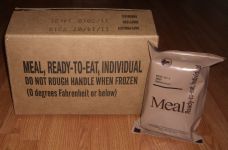 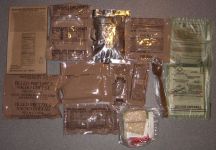 “Menu C” MREs are one of the newest brand of MREs on the civilian market. These MREs are the closest thing out there to real military MREs. The look of the meal bag, case, and the contents themselves are very much like the real thing.

In late 2007, a new brand of MREs came onto the market. These weren’t quite a civilian commercial brand like the Ameriqual aPacks, Sopakco Sure-Pak 12s, or the MREStar MREs. Instead, these MREs were initially produced by one of the major MRE manufacturers for a US military contractor working in Iraq. Civilian agencies aren’t allowed to buy MREs so this company wanted an MRE-like product built to their menu specifications. Since military MREs already come in “A” and “B” menus, these new contractor MREs were nicknamed “Menu C” MREs.

Before the entire order could be delivered, the contractor scaled back operations in the Middle East and this left the manufacturer with a large supply of extra Menu C MREs. Fortunately, an emergency preparedness company named MREDepot.com picked up the entire lot of MREs from the manufacturer and began selling them on their website and through eBay. Additionally, MREDepot.com is working with the manufacturer to ensure a continued supply of these MREs for at least the next few years.

The first set of menus for the Menu C MREs was created in 2007. Then in 2008, the manufacturer changed the menus but the changes weren’t immediately noted on MREDepot.com’s website. This led to some confusion and dissatisfaction with people who bought a case of Menu C MREs in 2008 or 2009 and were expecting the 2007 menus. The 2008 menus contained a number of item changes and reduced calorie count. Fortunately, the menus currently listed on MREDepot.com’s website are now accurate of what’s shipping and MREDepot is spot-checking cases from every new batch to ensure the menus match.

Here’s a look at a Menu C MRE: 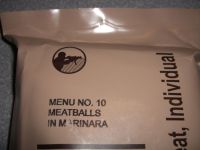 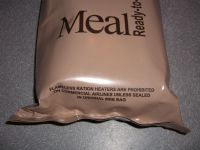 Notice how the MRE meal bag itself looks similar to the 2007 and earlier military MREs. But if you look a little closer, you can see that the soldier logo on the bag has been changed and the “Government Property” and “Commercial Resale Is Prohibited” warnings are not there. These changes were made because the Menu C MREs are not government property and because these are perfectly legal to sell to any civilians.

Because the manufacturer wanted to be sure there was no confusing Menu C MREs with military MREs, they made a point of changed the soldier logo that appears on every meal bag. Here’s a comparison between the Menu C logo and the military MRE logo:

This is what a Menu C MRE looks like after you open it and remove the contents:

The actual food items inside are usually the exact same items as found in military MREs (and in most other civilian MREs). There are some cases where the crackers or desserts will be in silver packaging as you can see above. Those are items from the Humanitarian Daily Rations (HDRs). The only difference between HDR components and military MRE components is the color of the packaging.

Even the accessory pack (toilet paper, matches, etc.), spoon, and Flameless Ration Heater (FRH) are exactly the same as the military MREs.

Overall, these are very solid MREs with a good variety of food. Unlike most other civilian MREs, the Menu Cs contain 12 unique entrees so there isn’t the “menu fatigue” you might get with other MREs that only contain 6 different entrees. With an average calories count of 1,146 calories per MRE, these are a little lower than military MREs (with their 1,300 calories) but are still on par with its competitors. 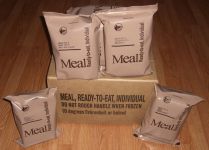 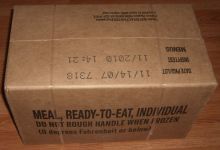 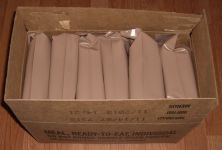 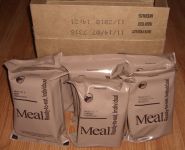 It’s not just the Menu Cs’ meal bags that are similar to the military MREs – the cases are similar, too. But there are enough differences that you should be able to tell the two apart:

Menu C MREs are available through the MREDepot.com website or through their eBay store . On their website, the Menu C MREs are priced at $79.95. Shipping from California is NOT included (comes to around $22 from CA to NC) . 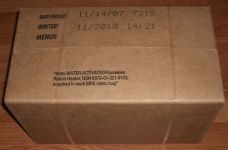 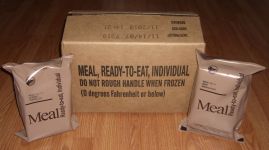