The West Point Story is a dramatic anthology television series shown in the United States by CBS during the 1956-57 season and by ABC during the 1957-58 season.

The West Point Story, produced with the full cooperation of the United States Department of Defense and the United States Military Academy, was said to be based on actual files documenting many of the real-life dramatic occurrences at West Point over the years. Names and dates were altered in order to protect the privacy of the real people portrayed, however. The program was hosted by a fictional cadet, Charles C. Thompson (portrayed by actor Donald May). - Wikipedia

To acquire the DVD of The West Point Story anthology, click on image or link below 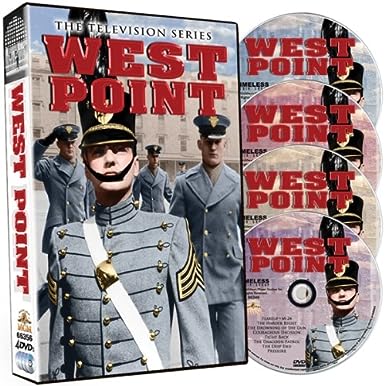 Is it a musical? I.E. the West Side Story?

Nope. Not a musical. Don't know if there are any theatrical performances in the series. Eden did not sing in her episode though she had a big talent for musical rendition.

Clip from the series with Clint Eastwood.