A couple of years ago I bought two 2015 Aussie CR1M Meal E packs for a total cost of around $140 delivered. I had previously opened and looked at one of them and finally got around to eating through it this week. I didn't really prep this as a full review, but here are some observations and notes. 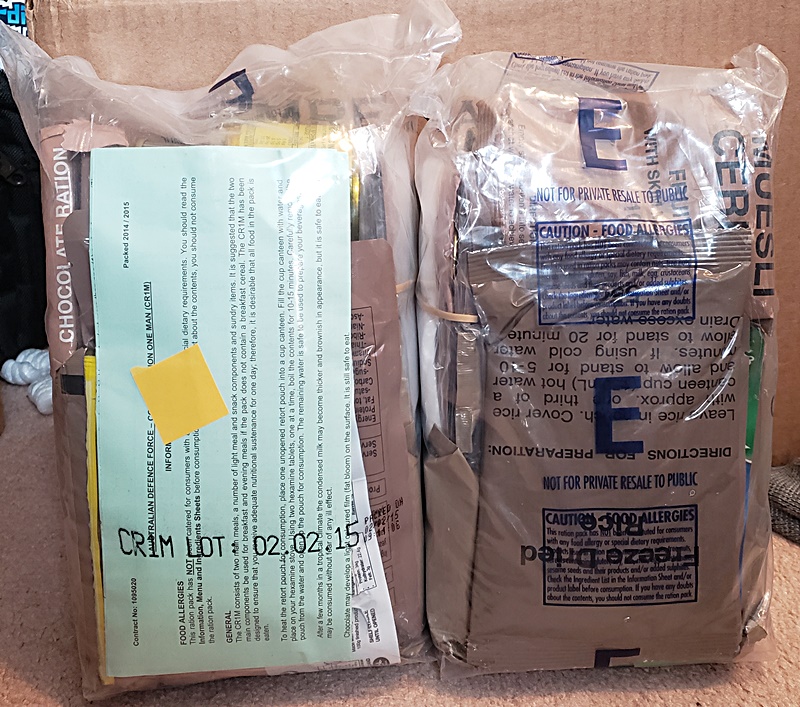 Packed in early 2015, this meal contained many components with pack/prep dates in late 2014, so the items were generally nearly 8 years old. The seller had said they were stored in cool, dry conditions for the several years he owned them and they have been in my airconditioned home since I received them about two years ago. The package is pretty heavy and contains items made in Australia and New Zealand.

Generally most of the items were in pretty good condition and almost everything was edible. The grape drink mix had turned into a hard puck and was discarded. Wheat-based items like the cereal bar, crackers and Mi Goreng noodles were certainly stale with the "old flour" kind of smell. But they tasted OK! The first day I ate the apricot cereal bar, one coffee and some of the sweetened condensed milk. An hour or so later I started feeling not so great, but nothing serious happened and it may have had nothing do to with the ration items. To be safe, though, I didn't drink the second coffee or use any more of the SCM tube.

On Tuesday, I had the fruit muesli for breakfast. It contained powdered skim milk and said to make it with cold milk. Turned out to be a decent bowl of cereal with granola and chewy bits of fruit. Later I snacked on the "Biscuit Cream Cracker" and the small can of "Processed cheddar cheese". My lunch first course was a package of Mi Goreng noodles. This is what we in the US call "ramen" noodles, really, just pre-broken into smaller bits instead of a folder "loaf". It had small packets of fried shallots, dry seasoning/soup base, savory soy liquid and an oily/buttery liquid (all of which were a bit dry or hardened, but still usable). I made this up with boiling water while heating my second course. Even though the noodles were a little stale, it still tasted good (though less intensely flavored than ramen I am used to). Second was a retort pouch of "Beef minced savoury with vegetables". This entre was tasty, though there wasn't a lot of texture or "chew" to it. The vegetables were only potatoes and carrots. While OK, it wasn't something I would seek out to eat.

Later, I wanted to have a couple of the dessert items, including the tube (yep, tube) of "Chocolate Spread" and bag of Plain M&Ms. I'll state here a little comment about the items that are included in metal tubes (like toothpaste). These packages making applying the food easy and they can be easily re-capped to hold any unused portions, BUT they don't work very well for "kneading" to make the food more consistent. There wasn't anything else included that I thought would be good with the spread, so I used some home-provided graham crackers. The chocolate spread was a little bit grainy, but still tasted great and the graham crackers were a good vehicle. The M&Ms were a little chalky but tasted great.

On Wednesday, I used the tube of plum jam on a home-provided English Muffin. The jam had separated a tiny bit, but was still fresh and good without even crystalizing. Plum isn't a flavor I favor, but it was good! I had a little left on Thursday and ate it on another graham cracker. Good item!

Lunch was a packet of soup, the other entre "Lamb Vindaloo" and some freeze-dried rice. The soup was odd in that the packet had the names and nutritional info for TWO DIFFERENT soups: "Golden pumpkin" and "Peppered Steak & Mushrooms with Croutons". On opening, it was clearly the peppered steak broth with tiny bits of mushroom and croutons. It made about 200 ml of salty, flavorful soup. Mmmm. I boiled the Vindaloo for about 10 minutes while hydrating the rice in hot water. The rice softened nicely, but did not absorb all of the water called for. I also added some of my own naan flatbread for a nice Indian-inspired meal. The Vindaloo could have been spicier and the extra water in the rice thinned the sauce even more. But overall this was a great lunch!

Wednesday dessert was a pouch of "Fruit cake" and the milk chocolate bar. The chocolate had clearly bloomed and become chalky. The flavor was OK, but really not great. Too bad. The retort "Fruit cake" was edible, but not really good. Not sure if it was an age issue or if it just wasn't good ever. The cake was dark and actually seemed overcooked and dry. No bueno.

Finally this morning I made the cup of hot Chocolate drink. I used the 250 ml of water it called for and it dissolved completely, but was pretty thin and VERY sweet. Not great, really.

The 15 g tube of "Yeast Extract" is still on my desk. Maybe I should have had some on the crackers with the cheese, but I didn't. I have had it before and it isn't a flavor I really like (probably because I didn't grow up with it). I will probably give it a try again some time.

So there you have it. An Australian CR1M, packed in early 2015 and consumed in September 2022. I will need to eat my other one soon as well as clearly there isn't a lot of life left in anything outside of the primary retort pouches. Not consumed was some of the coffee, sugar, salt, hot sauce and the yeast extract.

Ugh. I just looked at my second CR1M from the same packing date. It has a can of fruit cocktail in it that started leaking! I don't recall there being one in the ration I just finished, but maybe I threw it out a while back when I first examined it. I'm gonna need to open it up and clean that out. Hope it didn't spoil anything else.

I cleaned up the second ration and it looks like the can of fruit mix was the primary casualty. I cleaned everything up, dried it and put it all into the bag from the one I consumed. I notice the grape beverage was in similar shape to the first one--that is, it was no longer a loose powder. I found a small slit in the pouch, so I tossed it.

This second unit was still sealed it until I opened it last night. I found a couple of items in it that I didn't have in the first unit last week. I now recall that when I had previously opened it, I DID remove some items. I think the fruit cocktail can was showing signs of being bad, so I had thrown it out a year or so back. I had also eaten the Jacklinks Steak Bar and sampled from a package of Lifesavers "Musk" candies. IIRC, the Jacklinks Steak Bar was fine and the Musk Lifesavers where one of the most viles food items I have ever tasted. I don't know why that is a popular flavor down under, but I have read that it is!

This week I have been eating the second ration. The condition is basically the same as the first one. The ruptured fruit cocktail was obviously tossed. The chocolate bar was VERY bloomed and this time I didn't eat it anyway. The fruit cake MIGHT have been bad/spoiled, or it might just have been terrible. Either way, again I ate only a couple of small nibbles. Just a little staleness in the crackers and Mi Goreng. But overall still generally edible and mostly enjoyable!