Because everything tastes good when you're hungry!
https://www.mreinfo.com/forums/

by TurtleNomad
Thanks for all the great encouragement and feedback, guys!

Your MRE reviews have been an enormous help to me, particularly when I started my big preps overhaul four years ago.

And now, for a completely new "Nutritional Quality" data table page (using the original table from the huge page):
http://TurtleNomad.com/food/kits/compare_nutrition.htm
I kept it simple, to focus just on the most important data for the key kits.
Yet again, the AlpineAire stuff beats both the Wise and Augason buckets.

If anyone is interested, I can add trans fat.
I'm pretty sure it will be much higher for the stuff that is high in sodium & low in protein/fiber.

dirtbag wrote:Yeah, Barks has a bite (Pun intended).
Not much for root beer, though.

Vernors used to have more bite, but I think they switched from real sugar to that syrup stuff, changed the taste.

I haven't had Vernors in a while, mainly because the local grocery store rarely has sales on it. I vaguely recall that the last time I had any, it seemed to have less "kick". Thanks for the sanity check and explanation! That's a big part of why I usually drink "Throwback" - it uses sugar instead of high-fructose-corn-syrup. I wish they would make a non-HFCS version of "Code Red", my favorite Dew!

by Bobby
Great articles..I am surprised the AA 14 day bucket has that much more sodium than the AA 7 day kit. I have one 7 day kit and am thinking about purchasing another..Anyway great reviews

by Name_not_found
Great work keep it up!

It feels like drinking a live swarm of hornets

Bobby wrote:Great articles..I am surprised the AA 14 day bucket has that much more sodium than the AA 7 day kit. I have one 7 day kit and am thinking about purchasing another..Anyway great reviews

I'm glad you've found them useful, Bobby, and I'm really looking forward to reading some of your reviews.

Quick questions: I know exactly why you want to buy a second one - both because it's a great deal, and because it would mean you could try them all.

It's almost a downside that it has 25 unique varieties!

Yes, I was also surprised that the 7 had less sodium than the 14. It's not a huge difference (both are less than the others). My theory is that they add more salt, mainly to cater to non-vegetarians who might be "put off" by the blandness of many veggie meals. For example, my favorite "Pasta Roma" was amazingly high in sodium.

I was even more surprised that the pure vegetarian 14 had somewhat more protein than the omnivorous 7. I did correctly expect more fiber (beans, lots of beans).

When I cranked the original numbers (just protein and fiber), I was pleased that both AA were so much better than the Wise. I'm not hating on the Wise stuff, it's just that they're overpriced, and way overhyped, particularly the infamous square bucket. The AA-14 bucket is just as good, quality wise, and is somewhat more space efficient. Plus its contents are superior. I'll be posting the Wise review soon, as well as the aPacks, and Lifeboat rations.

I did quickly check the AA-7 for trans fat (the box is the easiest to handle of all the 7+ day kits), and it was only three grams for the entire box! That's less than one MRE Biscuit.

I've taken pictures of all the nutrition stuff, and will be uploading those soon.

P.S. Name, I've never tried "ginger beer", but am a near lifelong Doctor Who fan, where it was often mentioned. What sort of stores sell it?

TurtleNomad wrote:P.S. Name, I've never tried "ginger beer", but am a near lifelong Doctor Who fan, where it was often mentioned. What sort of stores sell it?

I tend to find it in pizza parlor's, but any supermarket should be able to get it if you ask.

There are more brands now then when i drank it often so here are some details.
-It is a soda (pop if that's what you say) despite the name, not a real beer
-It is highly carbonated
-It contains ginger

You will know a real one when you taste it, the swarm of bees will buzz around your mouth and down your throat with an intensity unlike anything you you have ever consumed.

by Bobby
I didnt have damaged pouches that I noticed..I will have to try one this week..I have to watch my sodium LOL...I bought a couple retort packages at HEB, Isadora Whole Pinto Beans..They have 8% sodium per serving and at least a 2 year shelf life..After two years the nutritional value will start to decline..

The Hunt is On!

by TurtleNomad
Thanks for all the feedback and support guys!

Sorry I abruptly paused this little project for almost half a year.

I had some unexpected housing problems, which resulted in a total of fourteen (yes 14!) moves this year.

That included two contract work on-site trips, which added to the stress and disruptions.

Two weeks ago, I finally pulled the plug on the more stressful contract (i.e. chose not to renew it), and just finished up the outstanding work this Friday. I'm planning to spend most of the next two to four weeks catching up on Life Stuff, and executing what I hope will be my last move of the year (or decade!).

I'll also be spending some time continuing this bucket/etc project, including updating some of the charts, adding new items (one of Mountain House's brand new "bucket" kits, more civilian MRE cases), and writing then posting all of the missing detailed reviews.
Stay tuned for some nifty stuff.

The only positive thing about all that chaos is that I had the, um, "opportunity" to try out moving all those buckets and other food items!

Nope, I did not move them fourteen times. After the third move, I got a storage unit, so "only" moved all the buckets four times (with a fifth move in progress). Each move averaged three floors (i.e. each move == one exit + one entrance).

All moves were under mentally stressful circumstances, and two were done during Heat Warnings (mega fun, not!).

It turned out to be an excellent field test, that reasonably simulated a bug out from a conventional natural disaster!

The square buckets were definitely less unpleasant to move. At first, I assumed it was the difference in weight, so I added stuff to both for the most recent two moves. They were still easier to move. I think it boils down to the fact that they are easier to partially brace against one's body/leg, so they're more stable. They're shorter than the round bucket, so that's probably also a pro stability factor. The tall round bucket, even lightened, was more difficult to carry on both stairs and level stretches.

The AA-7 box was easy to move (light), but it was difficult to carry anything else at the same time (except a backpack/etc). If it had had any sort of hand slots, it would have been much better, and I would have felt comfortable piling something else lightweight on top of it. The weight was easy. It was the lack of gripability that was a nuisance.

The aPack (MRE) box is heavier than the AA-7 box, however it's much less slick, so it was considerably easier to carry than I had expected. Yeah for MREs!

I've concluded that I should really have a dedicated knapsack to do "bulk transfers" of not too heavy stuff. While going up/down stairs I can carry something in each hand, but it's more efficient if I also have something on my back (fewer trips, and much easier to carry than in my hands). Loading then unloading items into and out of such a knapsack would take some time, but if the items are reasonably well organized, it shouldn't be too bad. I've ordered one, and will try it out during this week's move.

Remember, I'm an average size, middle-aged Geek woman, so what's difficult for me would be much easier for someone younger and/or more "active".

I also had the opportunity to experiment with limited water & limited heating, and will share some insights, later.

The main changes are the new Backpacker's Pantry kit, and three new Mountain House entries: two brand new buckets, plus the "old" 10-pack that has been available at Costco, and now is available at Amazon.
Note that the 10-pack suddenly shot up in price this weekend. My theory is that it is a response to Hurricane Sandy. Be patient, and the price will probably come down. If it doesn't, I recommend buying it from Costco.

I only bought one of the MH buckets (the "Essential Assortment" which is more cost efficient than the "Classic", albeit less variety). 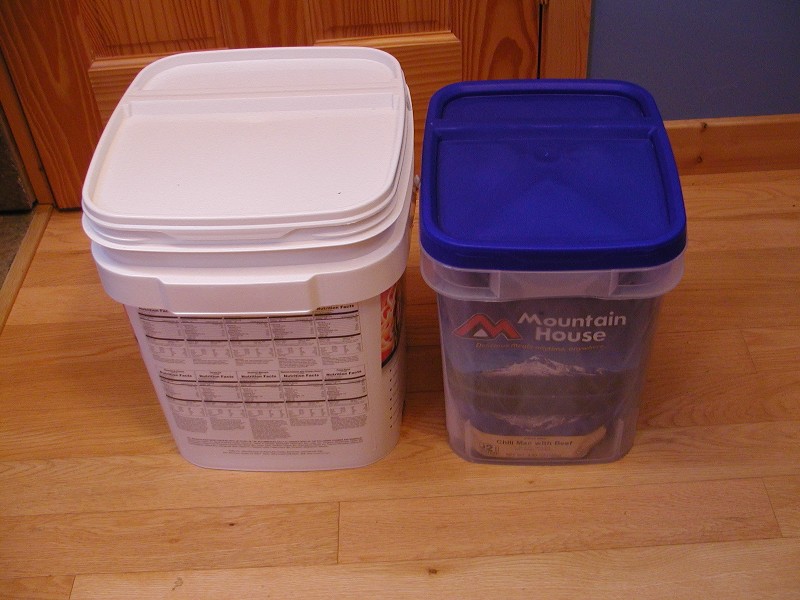 First impressions: it's so cute!

Seriously, in person, that is the first thought that popped into my brain. It looked like a kid size pail, which is kind of cool.
It's only four days worth of calories, so it's nice and light. It feels as sturdy as the AlpineAire bucket. I like it.

I'll post more pictures in a separate thread, once I've had a chance to open and inventory stuff.

I plan to try to fit all of the "10-pack" contents into the MH bucket - there's definitely space to fit a few more pouches, I'm just not sure how many.
All times are UTC-04:00
Page 3 of 4
Powered by phpBB® Forum Software © phpBB Limited
https://www.phpbb.com/