Three months ago, I mentioned a couple of Amazon deals on 7-day food kits.

Since then, I've been deep in Coding Mode, with barely any free time, but I had to eat, so I went a little stir-crazy and ended up ordering four more "kits" and have sampled most of the varieties.

Only 3 were buckets (3 were cardboard boxes), but I couldn't resist the above thread title.

I wrote up a big long overview review, complete with group/closet pictures and two comparison "tables"... but phpBB does not support tables, by default.

For now, I've converted it to a very crude, not pretty webpage:
http://TurtleNomad.com/food/compare_six_kits.htm
It's really long, but the first table has the key info, mainly cost per day and whether I recommend it based on cost and "value".
I added in a few non-dry food items, for comparison, including a fresh production case of civilian aPack MREs.

I was surprised by a few things, mainly with the buckets, which is in the relevant detailed sections.

I also included an "OPSEC" section, for the paranoid Americans.

I'll write up detailed reviews (including per pouch variety) over the next few weeks/months, based on which kit(s) you're all most interested in.

They won't be as entertaining as Yowie's most excellent one day "adventure" reviews, but there will be lots of pics!

I'm taking the next two weeks half off to catch up on personal (including tax prep - ugh!) and fun (including this) stuff! ...and a bunch of PMs that have been piling up... and catching up on reading a whole bunch of MreInfo thread goodness.

P.S. Housil, do I have more Mountain Dew than you? That's about the only area I could ever "compete" with your inspiring preps!

Nice start on your review!
Where's your water stash?
Or are you rehydrating with the Dew?
Avid practitioner of the martial art: KLIK-PAO
Top

TurtleNomad wrote: P.S. Housil, do I have more Mountain Dew than you? That's about the only area I could ever "compete" with your inspiring preps!

So I guess it´s "advantage TutleNomade"

dirtbag wrote:Or are you rehydrating with the Dew?

dirtbag, that's a brilliant idea!
I was planning to have AA-bucket granola tomorrow morning... if I remember, I'll use Dew to rehydrate it.

Good point about the need for water!
There is water on the other side of the closet. So far, only 12 gallons. There's also several 2L bottles of root beer, ginger ale, etc, and even some bottled juice (all bought on sale).

That reminds me of another one of the many "nice" things about the AA kits: they tell you how many gallons you'll need.
None of the other kits mention this very important bit of info.

housil wrote:I realy *love* Mountain Dew but it´s pretty pricy over here so I buy it only for special occasions like a good wine

housil, that's the one and only shelf-stable food "advantage" I'll ever have on you.

Over here, the regular price of cans of soda is higher than milk, but most grocery stores use them as "loss leaders" (about half price) for holiday events, which is when I stock up. The huge leap between the first and final pictures was entirely due to one big Super Bowl sale.

That was also the price I used in the big table, but forgot to annotate as a sale.
(For anyone who is as sports impaired as I, "Super Bowl" is the final game of the annual American professional ConcussionBall season.)
The important thing is the spices.
A man can live on packaged food from here til Judgement Day if he's got enough Marjoram.
- Shephard Book, "Serenity" (the pilot), Firefly

Also, get one of those water filters, never know when you'll need it.

Better to have supplies and not need them, than need them and not have them.
You may want to get a small camp stove, and fuel, Gotta have hot chow and drinks!

You might also consider getting some firearms training, If you haven't already. I think you mentioned military training...
A 12 gauge shotgun is a remarkable persuasion tool !!!
Avid practitioner of the martial art: KLIK-PAO
Top

Agree with Dirtbag, looking IN the barrel of an Mossberg 500 can change your opinions pretty fast.

Usually here, we use the AK

Just since the topic drifted a bit to water storage I thought I'd bring up the tub liners you can get and keep on hand. They'll turn your bathtub into a clean water storage tank, and while it's not smart to only rely on something like that it's definitely nice to have as an extra as there would likely be enough time to fill the tub before losing power or incoming water in most disaster situations. I recommend the waterbob or aquapod, basically the same thing.

The tip on your hot water heater's a good one - it's also good to have a water and gas shutoff valve tool handy. You can shut your water valve when you're prepped inside and then you have many more gallons stored in the pipes of the house itself. Plus, your house water system is then separated from any issues that could be going on with the local water supply should they arise later on (eg. contamination). Of course to get at that water you need a release at the lowest point you can access or you need to cut a hole in the pipe but depending on the emergency that could very well be an option worth having available.

I'd highly recommend storing more than 12 gallons long term though - more is always better, especially if you want to wash up every now and then.
Top

Very nice, i am often limited by the 10 image per post on the forum you have a nice solution there.

A few Questions:
-The wise food is vegetarian it uses TVP, did you notice it at all vs the real meat ones?

-Is there any allergy information on the packs

Thanks for the great feedback guys!

As I mentioned, that page is really long, so I've split out just the summary data table to one compact separate page:
http://TurtleNomad.com/food/kits/compare_table.htm

I've added some more notes (based on your feedback), and added a new column "space efficiency", which is just calories per liter of volume, based on actual cubic space occupied including wasted space (e.g. there is less wasted space in a square container).

The Wise food kit rates the worst (of the buckets), despite the cool square shape.
I was a little surprised that the circular Augason Farms 30-day bucket had almost twice the calorie density of either square bucket!


dirtbag:
The granola Dew experiment was a complete success.

I've done it for the last two days. Will post pics, soon.


dirtbag & Ruleryak:
You both raise excellent WATER points, so I'm going to start a separate thread.

There's also a barbecue thingie on the patio of the apartment I'm subletting. I have zero BBQ experience, but there's charcoal.

Since about half of the Wise stuff was not tastee, I've tried two varieties with cold water rehydration, with mixed success (rotini was crunchy, fettucine was fine).


dirtbag & ak70g2:
Yes, I did receive the minimum firearms training (just rifles) when I was in the Air Force reserves. I have not shot since then, but I attended my state Caucus this year, where I was invited to a private shooting range, which I'm considering doing.
I've never fired a shotgun, and that does feel about the "right" speed for me. I'm planning to buy rural land (possibly soon), and have been seriously considering a shotgun for protection. I'll have to write up my caucus experience (most of you would get a chuckle out of it), and pick your brains about the etiquette of a private range.

Name_not_found:
Is that a vote for me to do a detailed Wise review first?

That and the AA-14 are the only kits that I've eaten 100% of the varieties, so they're the easiest to start with!

One of the reasons I bought the Wise bucket was that it's 100% vegetarian. Part of the year, I abstain from meat, so that was a big plus.

About half of the Wise varieties had almost no TVP. In general, they were the worst tasting ones, and were the poorest in nutrition (there's a small nutritional summary table on the main page - I'm going to enhance it and break it out to a separate page).
The ones that did have noticeable TVP were generally the best ones, both in taste and nutrition.

Note that all four of the Wise sample varieties do have significant TVP, and all are reasonably tasty. I'm pretty sure that's not a coincidence.

One of the things I've been experimenting with is adding TVP to the low nutrition vareties. It definitely improves them, though part of that might be psychological.

On the other hand, it would be hard to make those worse!
Here's some Wasa crackers and Bob's Red Mill TVP that I've been using to "jazz up" both the AF-30 and Wise: 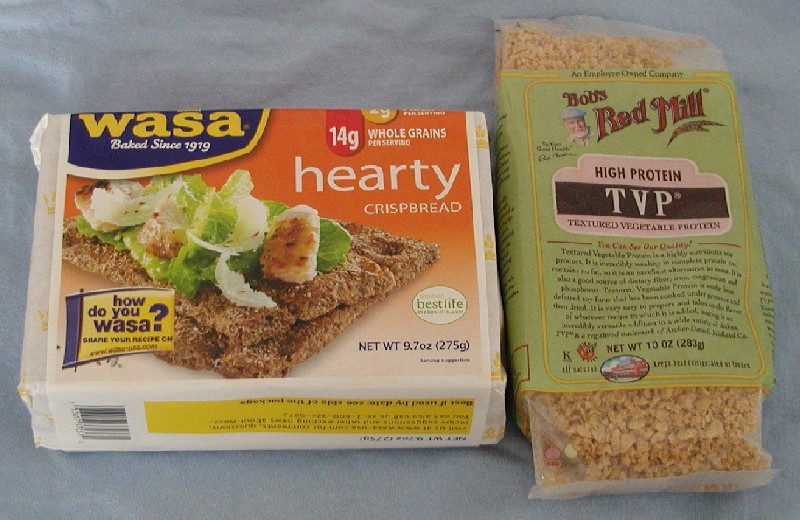 Allergy info: Most had it. I'll take a closer look, and list any which do not have it. Is there a specific one you'd like me to look for?
In general, the more expensive "backpacking" oriented kits have more info, and have it on the individual pouches. The cheaper "prepper" kits definitely do not list it on the pouches.

Bonus stuff: Other than the aPacks MREs and the Augason Farms 30-day bucket, there was no cool stuff. 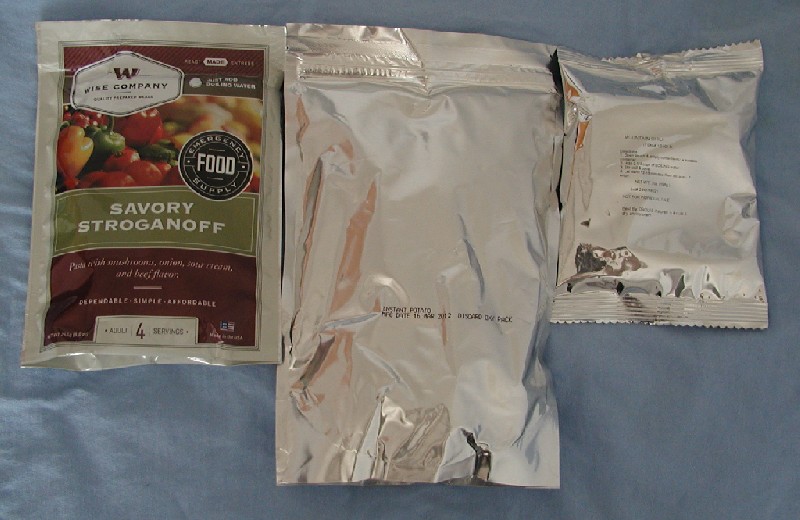 The Augason Farms 30-day bucket pouches are huge compared to the rest!
However, the AF-30 pouches do not have any cooking information.
I'll weigh them as soon as I pick up my food scale from storage.

Since these have about 15 to 20 "servings" each, it's a nice addition. They're also much tougher than the Wise and AA pouches, as I mentioned in the way-too-long page (I'm going to gradually chop that up into smaller, more focused pages).
The important thing is the spices.
A man can live on packaged food from here til Judgement Day if he's got enough Marjoram.
- Shephard Book, "Serenity" (the pilot), Firefly

Ma'am, I was cross-trained as demolition and sniper, and that's "sparkled" my interest in medical issues.

If you allow me an advice, I suggest you to get first a good shotgun like Mossberg 500/Maverick 88 (they are practically same thing) and became familliar with it. Nothing beats a charge of 000 buckshot from a short range.

After that, if you need something more, pick an semiautomatic AK47/AKM, is a very easy to use, to maintain and to dismantle. Also, the 7,62x39 mm ammo is cheap and plentiful (and damn effective).