Last weekend I went on a trail run with a local 4x4 club. Was driving my new-to-me 2005 Jeep Wrangler Unlimited.

I brought along a 2015 Canadian IMP for lunch: Shepherd's PIe. I wanted something from my ration cache that was aging, but also at little risk of making me sick.

Let's get that out onto the floor and seat of the Jeep... 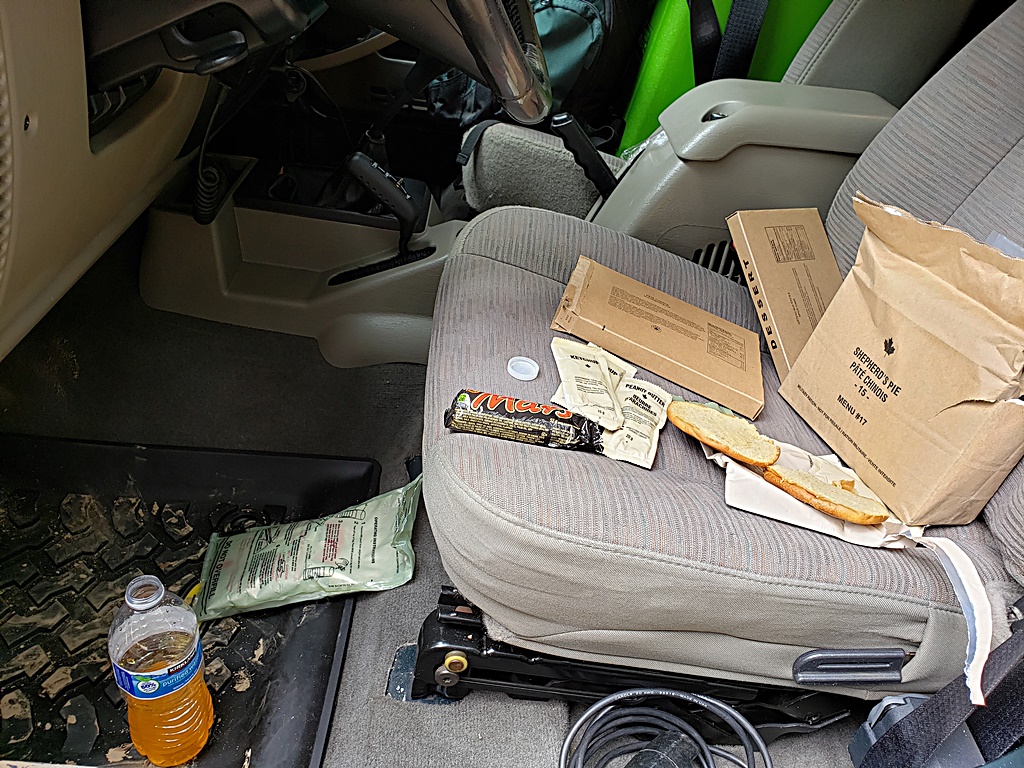 I didn't think we would stop very long for lunch, so I brought a US MRE heater for my meal. While my main course was heating, I made a peanut butter sammich. The hamburger bun was dry, as expected. I only had Peanut Butter to put on the bun--no jam, just 2 PB packets.

The orange beverage powder was a tasty change from the water I had been drinking.

Not knowing how long I would have, I ended up not giving it long enough to fully heat. It felt hot to the touch (even hard to handle). Actually, it was basically room temperature inside even after more than 10 minutes in the heater. Still, the main course was pretty tasty. Beef, potatoes and corn in gravy. I didn't think it needed any ketchup, but would have liked some hot sauce.

Dessert was a Mars Bar and a boxed spice cake which I did not eat. The Mars Bar was a bit hard and the chocolate seemed a bit waxy or hard, but tasted pretty good at the end of the trail.

If anyone is interested in more pics and lame videos from the trail run, check it out at https://wranglertjforum.com/threads/tra ... day.24224/

Nice review. I had to add a little salt to the Shepherd's Pie main, seemed a little bland but I liked it. One thing I noticed is that this particular main comes in a puffy retort pouch. Often that can be a sign that the main has spoiled but for some reason, this one is packed with a lot of air so to those that try this main, don't be alarmed, the pouch is naturally puffy. If that was a US FRH you were using, sometimes it helps to put a little salt into the water especially if the FRH is old. I don't get it, every other country seems to have better FRH's than we have. Also a handy trick I learned from Gundog is our FRH bag is quite small and there is not always enough room if you want to heat up multiple components. It's easy to just take the element out of the FRH and toss it and the components into a larger bag like the outer main pouch of US MRE's. Ziplock bags have even worked for me in the past. These days I rarely even use the original US FRH bag unless only heating up a single main. I like to heat the bread components so that they are softer and almost everything in a US MRE is better when heated.
Last edited by mikeoverhere on Thu Jul 11, 2019 12:49 am, edited 1 time in total.
Socrate's last words: "I drank what?"
Top

I noticed the puffy pouch, too. I would have considered it bad IF I had not recently watched a review where this tendency for Shepherd's Pie was mentioned. So I used my eyes, nose and finally tongue to determine that it was still good (only 4 years old after all).

I don't think the FRH was to blame...IT was plenty hot. I just didn't leave it "cooking" long enough. When I took it out, the meal pouch felt very hot and I had to handle it carefully. Alas, the dense food inside was NOT yet hot. To get the food into the patch did take some wrestling. I finally got it in by taking out the heating element, then shoving in the food pack and then returning the element back inside. I know there are Canadian FRHs, but I have none and have seen none.

Did you put the pouch and FRH back inside the box? The cardboard does a pretty good job of trapping heat.
The Liver is evil and must be punished!
Top
Post Reply
4 posts • Page 1 of 1