I like soups very much and I think that nothing can boost your morale better in the cold than a hot,spicy soup.OK, a hot cocoa or hot chocolate isn't bad either

Including some type of soup into rations is a very good idea. IF they taste good.Soldiers deserve a hot,tasty soup in the field.
One thing I would improve in French rations is the soup. I have tried 4 types so far but only 2 passed my test.
Two were inedible (at least for me). The "Potage Jardiniére de légumes" was worst:

Even in the pouch it smelled bad.Like dry dog food...or dense,raw starch..I tought it will be better when prepared but it wasn't. Pumpkin soup was the same.

That was the bad news.Now the good news. "Chicken curry" soup was next.

I added some chili powder as always:

I was too lazy too cook that day...
So I opened my treasury and choose an RCIR soup. This time it was "Mushroom soup".

There were small pieces (cubes) of mushroom in the powder..
The ready soup...looks like any other soup:

In the field I would prefer a cream soup or some type of Ramen noodles (Maggi makes a smaller version).I think that a civilian made Maggi or Knorr would be a better choice than the "Pumpkin" or "Jardiniere" (what does "Jardiniére de légumes" mean?).
Top

I had that mentioned Maggi soup out of a RCIR before: 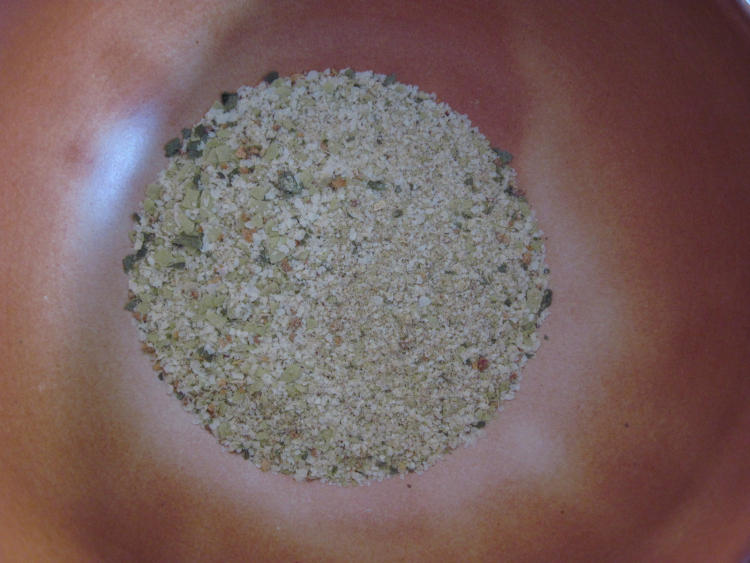 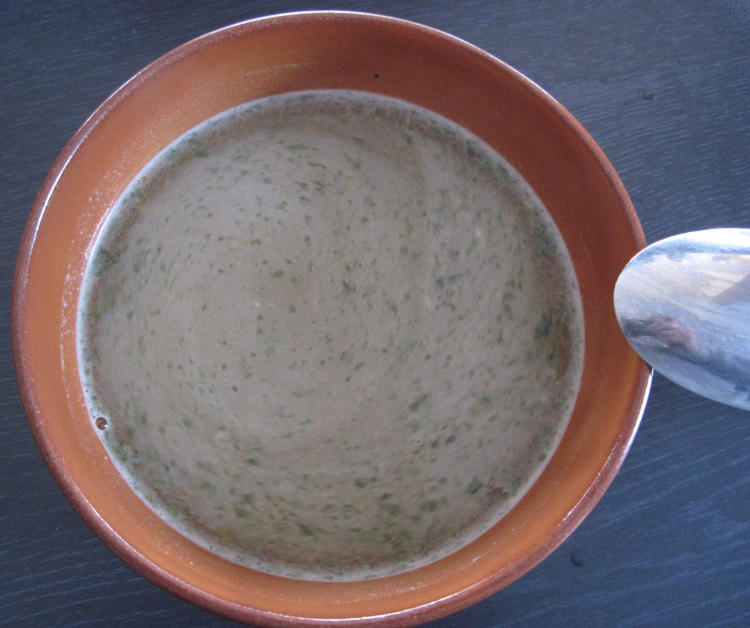 It was "OK", just like vegetable stock drink with "flakes".

Speaking of soups, I had a UK ORP "French Onion Soup" 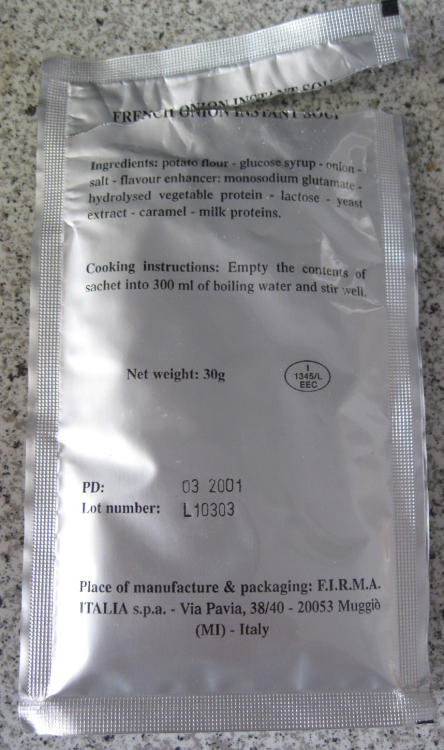 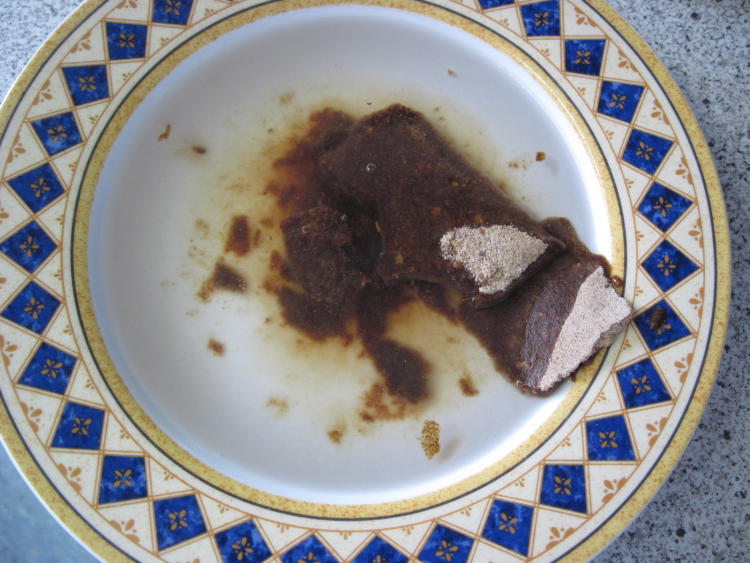 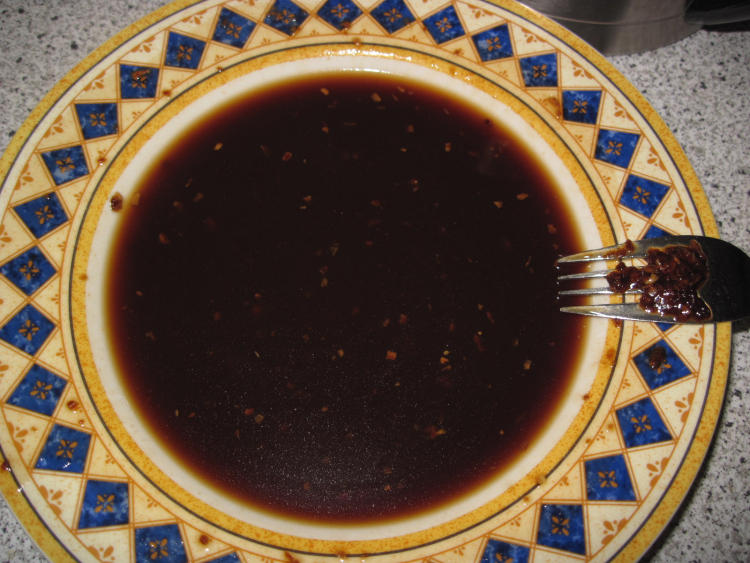 It was as bad as the pictures seems...
I tried it but didn´t eat it. It never realy dissolved (see the "mud" at the spoon I used to mix it up)

Also I had a UK 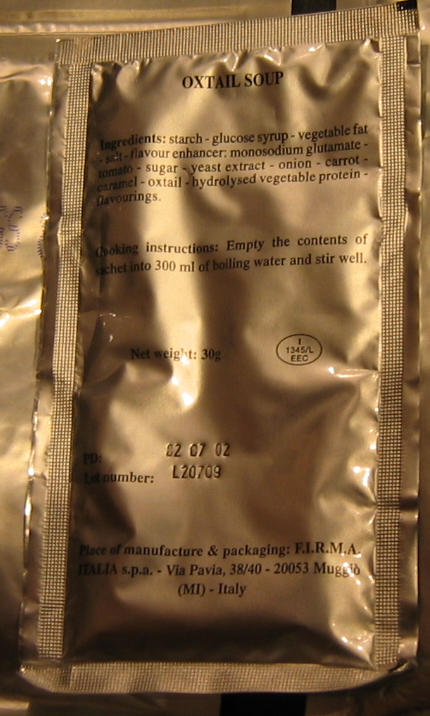 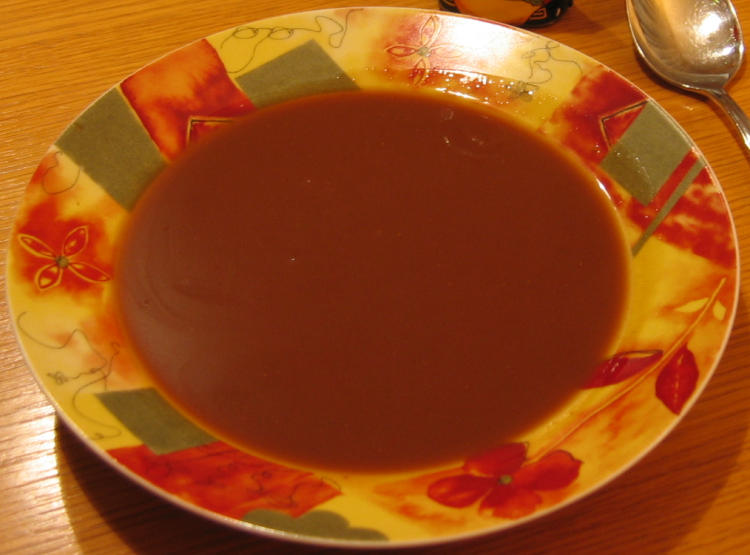 That one looked good - I´m sorry to say, it just looked.

But the worst I ever had was the UK chiken soup (no pic´s). The taste was like melt/burnet poultry bones. Serious...
https://www.facebook.com/Einmannpackung ... 599910405/
Top

When I was in England I didn't have the courage to try it.

That Maggi soup wasn't really fullfilling,was it? I mean, it's not a cream soup and there's no pasta in it.
Top

That Maggi soup wasn't really fullfilling,was it? I mean, it's not a cream soup and there's no pasta in it.

Yes, it´s very "liquid".
There comes a potato soup with the RCIR also, that one was more rich/creamy.
https://www.facebook.com/Einmannpackung ... 599910405/
Top

Hi,
in fact those soups are not supposed to be a hot meal of any kind (unlike a thick bortsch or potatoes and bacon soup, full ramen noodle soup, etc.), they are just a hot drink for a cold evening

Stef wrote:Hi,
in fact those soups are not supposed to be a hot meal of any kind (unlike a thick bortsch or potatoes and bacon soup, full ramen noodle soup, etc.), they are just a hot drink for a cold evening

haha, good one Stef!
I did consume some Uk soups from the 90's rat's and I did find them quite OK actually. They were 'thinker' / more creamy than the instant soup in our Dutch rations ( especially the beefy tomato soup). They fullfill your discription, ha. Mind ya, it depends on the amout of water added ofcourse. But following the mixing instructions the soups can be 'watery' indeed.
Top