For months I had seen this product on several prep vendor sites, and was eager to try it as a more flexible, slightly cheaper, alternative to FRHs. It's much bulkier than a single FRH, so more suited to a multi-meal application.

My main intended uses were hotels and car birdwatching trips, where a slight increase in bulk would not be an issue. 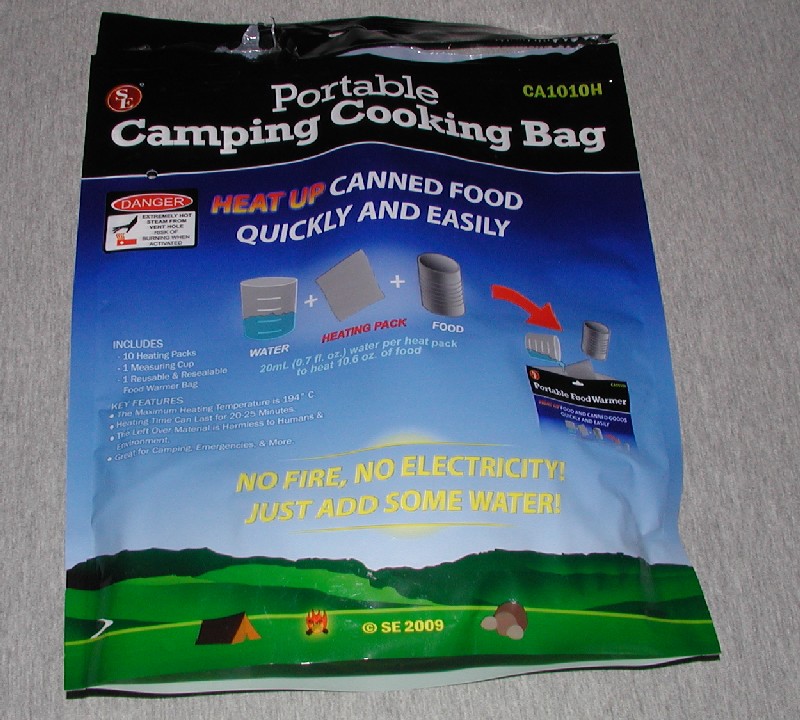 The measuring cup and mylar bag with all ten heating pads:

Inside the mylar pads bag: 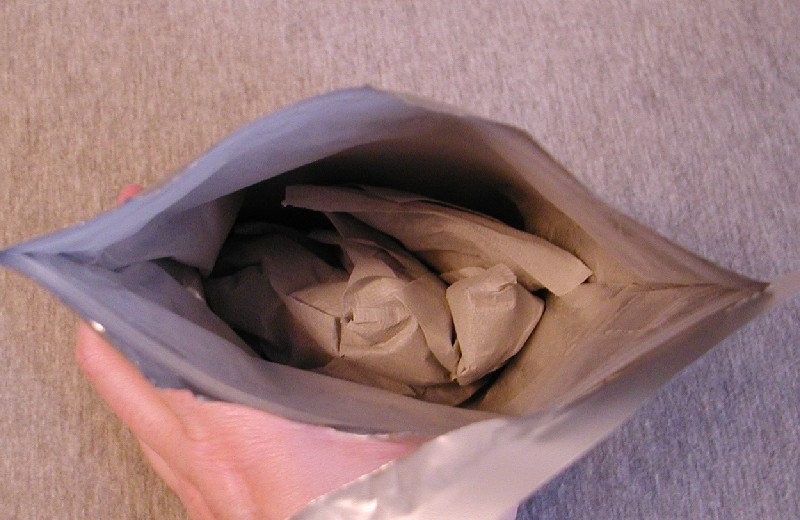 A single pad beside the measuring cup (for scale): 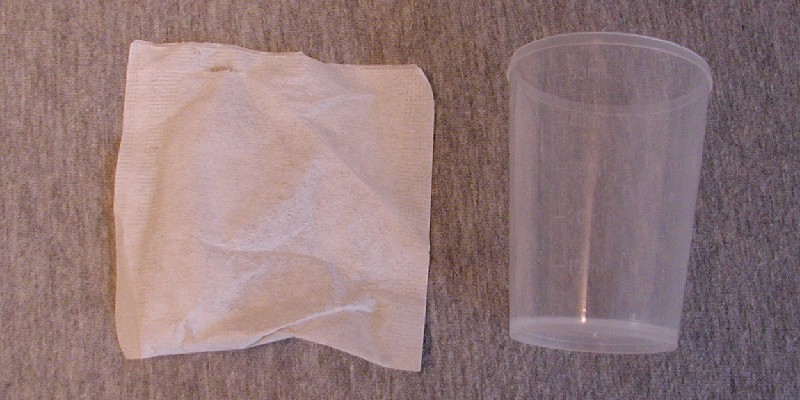 A single pad beside the heating component of a FRH: 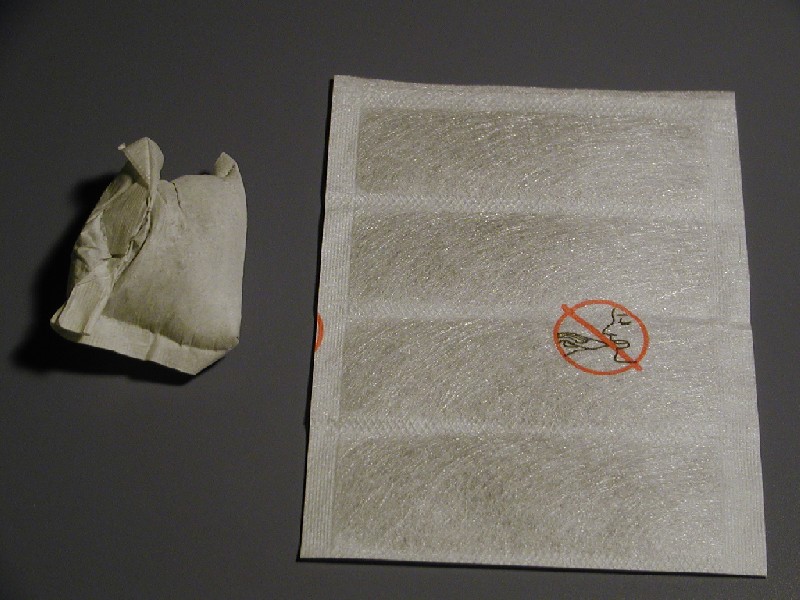 Cooking bag in use, wrapped in an authentic hotel towel: 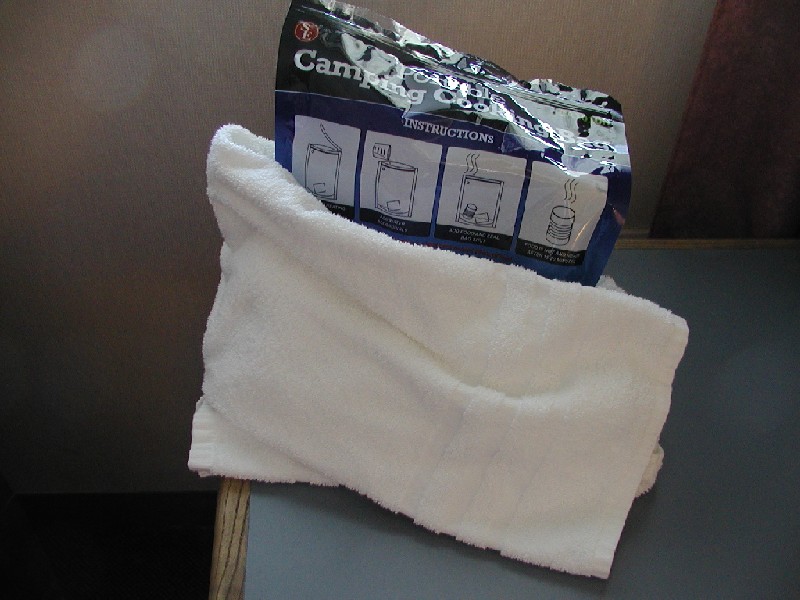 Performance:
I've used it three times (so far), and all three times it was inferior heat-wise to an FRH.

On a positive note, it was considerably less "fussy" (no stuffing & no dexterity required) than an FRH, and it's better than nothing.

The smell is roughly equivalent to an FRH. The bag's instructions assume outdoor use, and provide no information about the fumes. I performed all testing (so far) indoors, so am somewhat concerned about this lack of info (I have not found a manufacturer's site, or any reliable info).

The absolute worst warming occurred with the canned food, which was particularly disappointing given that this product is supposedly intended for cans. I used a regular 425g (15 oz) can (Chef Boyardee whole grain lasagna - nothing weird).


I suspect there are trick(s) that would improve performance, so please throw suggestions at me, and I'll try again.

I'm a novice with FRHs as well, and am having a mental block on what to try.

If anyone's interested in trying this, Amazon has it for about $6.50 (it's been fluctuating wildly for months, but finally dived below $7 about two weeks ago) for the bag with 10 pads.


I'm in the midst of experimenting with several alternative heating devices, and would welcome reviews from anyone, particularly for things like car manifold cooking.

If anyone is interested, I can post up some experiences with Thermos Cooking, which is mostly Kate/Geek-proof, hence it must be MRE-Geeks-proof.

I've been meaning to post this for a while (wrote the first draft last Spring), but have been buried in Work. Gotta take some time off to play with fun mostly non-computer stuff.
The important thing is the spices.
A man can live on packaged food from here til Judgement Day if he's got enough Marjoram.
- Shephard Book, "Serenity" (the pilot), Firefly

TurtleNomad wrote:
If anyone is interested, I can post up some experiences with Thermos Cooking, which is mostly Kate/Geek-proof, hence it must be MRE-Geeks-proof.

Keep going! I ilke to read and see pictures of stuff we don´t have

Where did you got it? Wallyworld?

Having used it, this definitely feels like the "caliber" of product Walmart/TheDominion would carry.

Has anyone seen these there or at another brick & mortar? If so, try it so I know whether it's just me, or whether they really are mediocre.


housil wrote: Keep going! I ilke to read and see pictures of stuff we don´t have

Ok housil, after all the great posts by you, I'll dig thru my pile of pics in a week or so, and put something together.

I'd be interested in learning more about the Coleman Thermos cooking. I understand that Coleman has introduced some new products besides the old standy steel vaccum Thermos. Last March I pruchased a double walled sport mug, that slipped apart into two halves and had measurements on the side for dry and wet mixes. Very cool invention. I found that at the local Sportsman's Warehouse for under $15.00.
Top
Post Reply
5 posts • Page 1 of 1