It had lot´s of "oily liquid" in so I smelled at it: 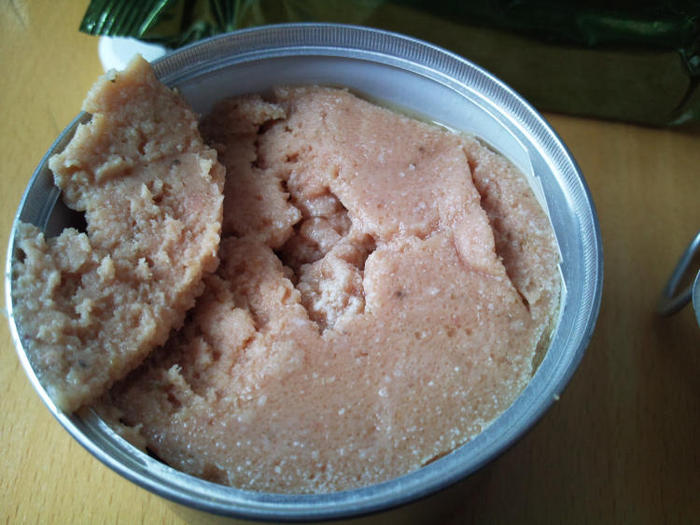 It had a "suspicious" and "sour" smell, so I better

it. Pull up covers have obviously a less shelf live
https://www.facebook.com/Einmannpackung ... 599910405/
Top

Bummer...sorry to hear about your pate-gone-bad. I'll have to pull up one of my 2003 British rations to see anything in there is going bad. Was there any damage to the outside of the container?
Top

kman wrote:Was there any damage to the outside of the container?

Nope.
That was my "in-case-of" at work I have in my locker. That morning was a in-case-of-day and I had British crackers as breakfast.
I should open another 2001 chicken/herb pate to see if it was maybe just this one

but this pull up covers have a precut line where they open and to me this is the entrance of germs, oxygen etc.

Yeah, those pop-off lids are dangerous...
We noticed a very bad smell, coming from the pantry, and finally tracked it down to a can of cat food, that the seam had cracked just a tiny bit!
You cannot stack too much on them, either!
Not one of the better inventions, I think!
Avid practitioner of the martial art: KLIK-PAO
Top

housil, that reminds me of the infamous "cheese, possessed" ration that came with some British 24-Hr. ration-packs, I guess even the best packaging methods simply don't outlast the effects of time.
Top

It's not nicknamed 'tinned dog' for nothing. lol
Top

If the smell is odd/off. it's proably gone rancid indeed.
Too bad.

Every now and then I dig into some 1996 UK pate cans.
Taste is OK. Contents looks similar as to your can (apart from the texture), from what I can see.
the specs of grease are normal.

Bummer man - hey they got 24 hour rations on ebay right now (well they did last night at least) buy-it-now translated to U.S. moneys its only $13.50 ea. but I'll bet shipping from UK is sick!