I recently received some Dutch ration entree from housil via a trade and just gave one a try. I see that Garron did a review of the same entree here: viewtopic.php?f=13&t=2506 but I thought I'd add in my own review, too.

This is a review of a "Rijst Ratatouille Met Kip" (Rice Ratatouille with Chicken) entree from a Dutch military ration. The entree was produced in July 2004 and is best by November 2006. I was eating it almost 3 years past its "best by" date but it was still perfectly good. At the time this entree was produced, the Dutch used cans like these for their ration meals. Sometime after 2004, the cans were replaced by the same type of retort pouches now used in the US and British rations.

The entree itself is pretty hefty at 400 grams and 450 calories. In comparison, a typical US MRE entree is usually 227 grams and around 325 calories. 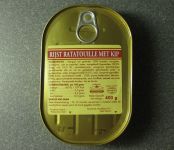 To heat the entree, I placed the whole unopened container in a pot of boiling water and let it heat it up for 15-20 minutes. I really should have let it heat for 30 minutes because when I opened it, the food was hot around the edges but only mildly warm in the middle.

Here's what it looked like opened up and then after I stirred the contents: 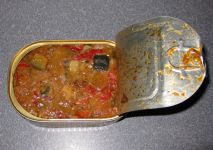 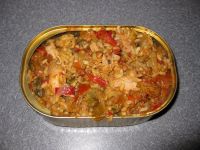 If you're asking (as I did), "What is Ratatouille?", here's what Wikipedia has to say on the subject:

You can definitely make out the zucchini, eggplant, and bell peppers in the entree. Personally, I'm not a big fan of bell peppers so at first, I didn't much like the entree and considered not eating it. But Mrs. Kman took a taste and said it was good - in fact, one of the better ones she's tasted - so I gave it another try and after a few more bites, the taste grew on me and I really started to like it. I eventually added some Texas Pete (hot sauce) to the entree and that really improved the taste. 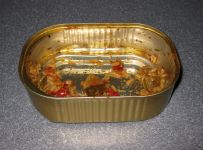 Glad you liked it, that was the first Dutch Ration I ate, not a bad way to start. I've got 2 other menus at home I'm tempted to try them one day next week (I'll be at home on holidays from University)

Hey, that entree doesn't look Dutch at all, it could even be French

Stef wrote:Hey, that entree doesn't look Dutch at all, it could even be French

Good movie, but I didn't care for the dish...

A "Ratatouille" is very common over here.

is a simple dish,easy to prepare from scratch.....

But the cans are not replaced, the bags are just added (but are probably going again)

The Dutch army still uses the cans (never stopped), aluminiumlike bags like in MREs, and US MREs from Sopakco (US Department of Defense... right.. property of US Goverment... right..)

The alu bags are very inconvenient when you don't have any flameless heaters.. Especially infantry still uses the "oldschool" cans.
Sure, someone may one day kill me with my own gun.
But they'll have to beat me to death with it because it's empty.

A computer once beat me at chess, but it was no match for me at kick boxing.
Top
Post Reply
10 posts • Page 1 of 1