"Nobody" has seen an Austrian Raion yet - thats why there are more rumors than facts about them.

Sometimes on Ebay some seller offer "Austrian Raitons" but after a closer look, they are also just ordenary civilan supermarket crap...

Even on the homepage of the Austrian Army (Bundesheer)
http://www.bmlv.gv.at/facts/management_2010/index.shtml
are no information how a real Austrian Ration will looks like.

Another "maybe" I got on ebay Germany. The seller promised a "genuine Austrian Ration".
http://cgi.ebay.de/ws/eBayISAPI.dll?Vie ... :IT&ih=001 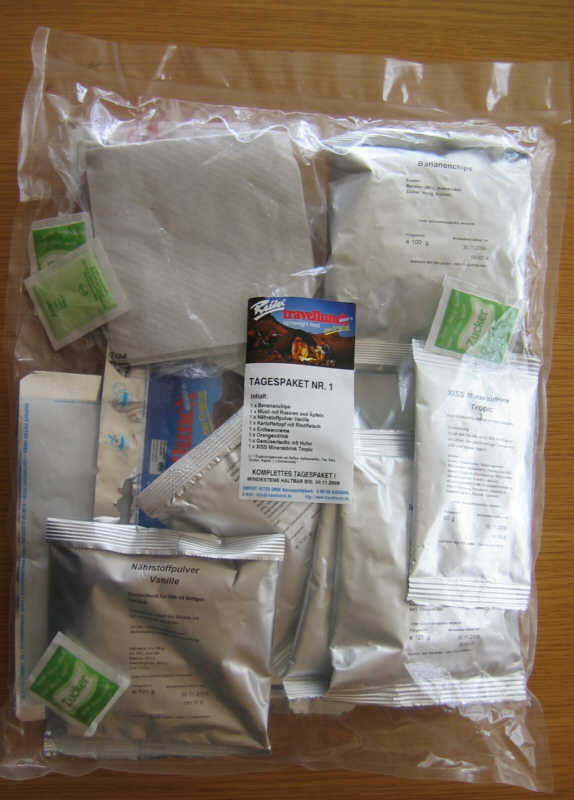 the same as used in the German EPa leicht (1st generation). 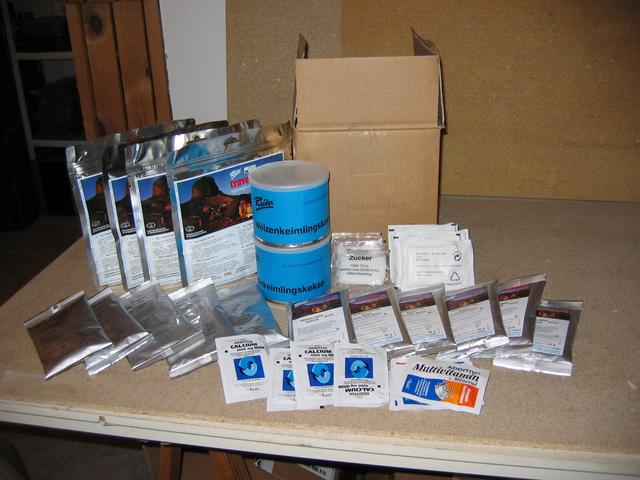 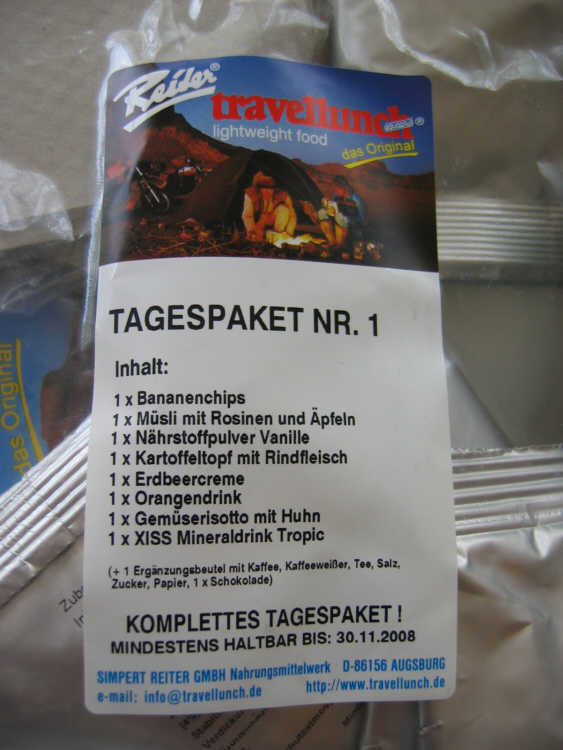 but it has a "best before" date on it. Very unusall for a military one. 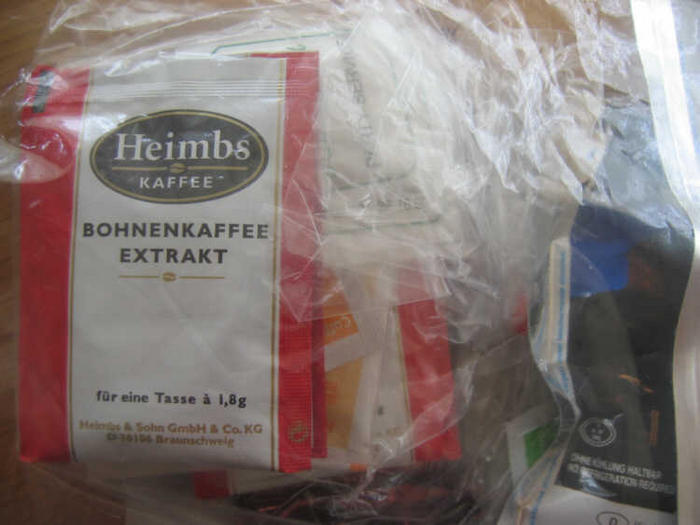 also contains some civilian made coffee a.s.o. but a bar of genuine EPa chocolate

I called the manufacturer in Augsburg, asking him some questions. They replyed that their company is producing for "several armies", but can´t give any furter information.
He recommanded me, to comapre "my" ration with a regular, civilian, outdoor shop, Tagespaket sold in their shops... 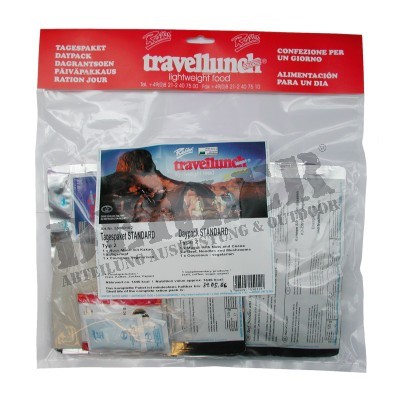 If you remove the red card board label - it´s seems the same.

As I paid less on Ebay than in the outdoor shop - I wouldn´t complain at the seller. I just pleased him to explain me the "genuine Austrian" before I will give him my feedback...

So the hunt is on for the fabled and elusive Austrian ration!
Top

kman wrote:So the hunt is on for the fabled and elusive Austrian ration!

After I found the Holy Gral to replace my canteen cup, I will continue...
Top

More tea for your holy grail??

I saw the pics of an austrian ration in a japanese site "rationworld".That's all i got. the bag is green and says...
"TAGESPORTION FUR DEN JAGDKAMPF"

I got some pics of the bags,that's about it. I doesn't show any contents.
Man...those japanese guys always get good goodies....

By the way...sorry mein freund

housil but i think you got dupped....

I got anothe pic...but I'm not sure if is austrian or german??

Bypah wrote:I saw the pics of an austrian ration in a japanese site "rationworld".That's all i got. the bag is green and says...
"TAGESPORTION FUR DEN JAGDKAMPF"

I got some pics of the bags,that's about it. I doesn't show any contents.
Man...those japanese guys always get good goodies....

I got anothe pic...but I'm not sure if is austrian or german?? 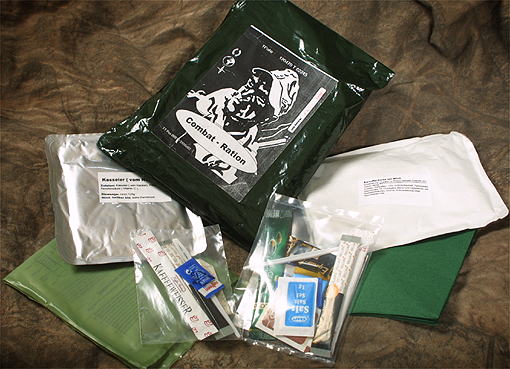 was sold from some "smart" guy, ripping off collectors. It is devenitively a home made fake ration. The label was made on a ordenary printer, showing a WWII German Wehrmacht soldier. If contains some ordenary supermarket crap. 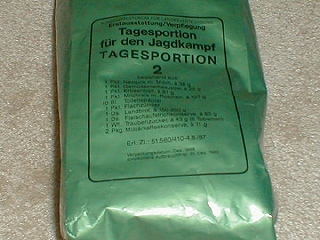 you are right, say´s "Tagesportion für den Jagdkampf" and is a genuine one. But the Austrian Army also changed to Reiter Travellunch.
I also know that asian page with that ration. 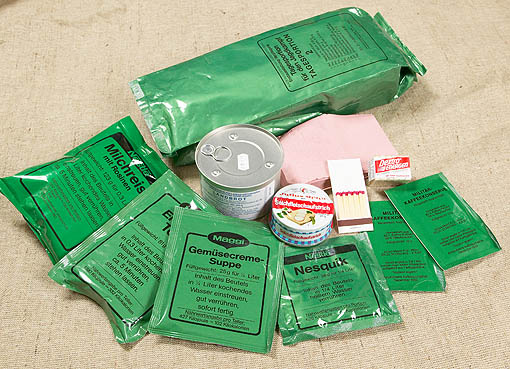 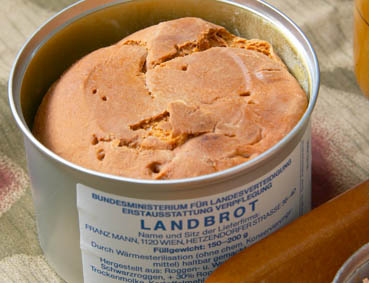 The label of the canned bread say "Bundesministerium für Landesverteidigung" (= Deparment of Defense ) and I guess this one will be a genuine, former, Austrian one.

See pic of a female Austrian soldier resting from the site 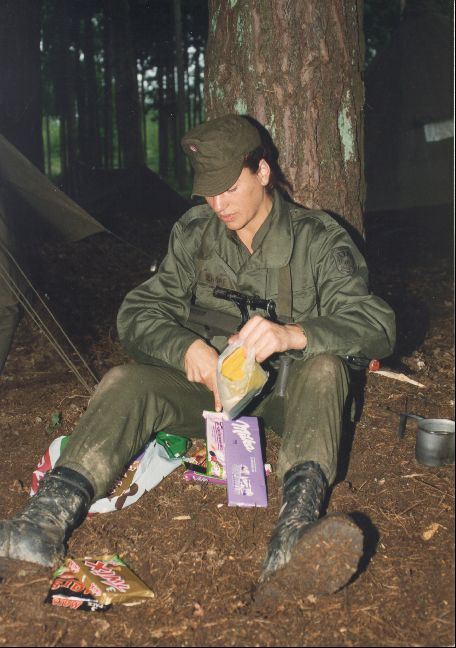 all food she has are candy bars. No evidance for his ration...

See what BABEL FISH made out of it:

I read in a Austrian Ration forum, that also the soldier didn´t got the ration. They got all ordenary (civilian) food supply, never a Tagesportion.

housil but i think you got dupped....

Me either... but more my feelings than my wallet

Maggi is a nice company that makes instant soup and cooking flavores boullions....is Knorr's competition. Back in Puerto Rico we used those a lot....yum!!

I imagined the first pic was a familiar and a fake!!! a WWII german soldier..hmmmmm even those japs got fooled too....lol

Have a good one, Kammarad!

oletroop can probably cough one up, as long as you pay for it, with super insured payment and shipping.

So i guess the Austrian war-machine runs entirely on candybars?