Das Boot (German pronunciation: [das ˈboːt], German meaning "The Boat") is a 1981 German epic war film written and directed by Wolfgang Petersen, produced by Günter Rohrbach, and starring Jürgen Prochnow, Herbert Grönemeyer and Klaus Wennemann. It has been exhibited both as a theatrical release and as a TV miniseries, and in several different home video versions of various running times.

To acquire DVD, click on image below
Das Boot - The Original Uncut Mini-Series 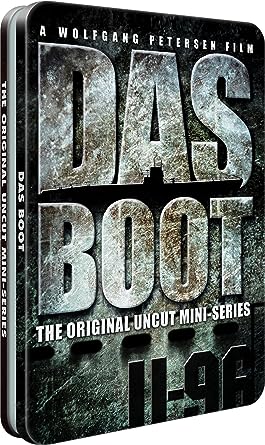 I've seen the 3.5h version, in original German. I could not watch this dubbed same as would never watch dubbed Stalingrad 1993 it would kill the movie vibe in some way. It it one of the best ww2, war, navy movie ever made. And it brings so much perception of crew life in that time.

Who likes this movie should read following books; Iron Coffins and Sharks and Little Fish.
Top

One reason I suggested the English version (without subtitles) is because the film won an award for the transfer. I certainly can relate to your point.

Here I visited the studio where the movies was shot and walked in the boat:

This is a film I enjoyed and watched more than one time. I think I saw all the iterations of the film. I even saw parts on Laser Disc back in the day.