Yeah, how cool was all this?!? I'm about to post the details of the Australia ziplock - it's mind-boggingly huge!

Plus, there were several small and nifty European items I haven't posted yet.

There's two reasons I still haven't sent NNF his swap package:
#1 I had several life disruptions (housing & work).
#2 I had to source a few small "fun" items to attempt to give him something a lot more fun than the "boring" set of AA-14 freeze dried items he had asked for.

There's no way I can equal the exoticness of his bundle, so I won't try, but now I grasp how important the "surprise" factor is.

Adrian:
No worries! I'll be moving at the end of this week, but the address I sent from is still fine. Take your time. I'm looking forward to the European vs USA Nutella taste test, and anything else you care to send.

NNF & Treesuit:
About two years ago, a microwave-phobic friend introduced me to the convenience and versatility of electric kettles. Until then, I had not realized that they're faster than microwaves. That's what led to my experiments with Thermos cooking (expect an update to that thread, soon).

NNF, how cool is that kettle?!?

When I bought my first kettle, I had considered it but rejected it as too large. Silly me. The Target one was too small to nest a Thermos food jar in, so it was effectively "larger", plus it started leaking during its first month, and scaled up regularly.

I had really low expectations for the Walmart kettle, but I've had it for at least half a year, have taken it thru several moves (almost always with my food jar stored inside it), and it's still working fine. No leaks, no scaling. Dang good value!

Plus, of course, at least two retort pouches definitely fit in it fine.

I often forget to remove stuff from it until it's sat for almost half an hour, and it's usually still hot enough to be a good meal. Stay tuned for pics of a Hormel Complete type meal in it.
The important thing is the spices.
A man can live on packaged food from here til Judgement Day if he's got enough Marjoram.
- Shephard Book, "Serenity" (the pilot), Firefly

Next up was the Bridgford Honey Barbecued Chicken sandwich.

I'd had the cinnamon bun (excellent!), but none of the sandwiches, and have really wanted to try one. Seeing this in NNF's parcel was a very pleasant surprise!

I had it for breakfast on a day I was leaving my base of operations for a short away mission. I wanted something quick, filling, and which wouldn't require much/any cleanup. I had already eaten most of my freezer+fridge meals, so something shelf stable made sense. 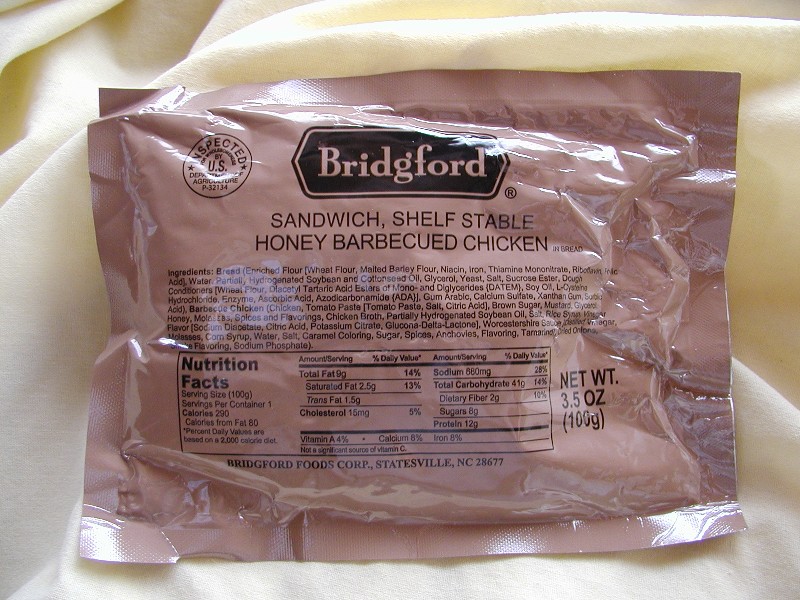 I used my cheap Walmart kettle to boil some water, then immersed the package directly in, while I finished packing up.
Here it is, half pulled out: 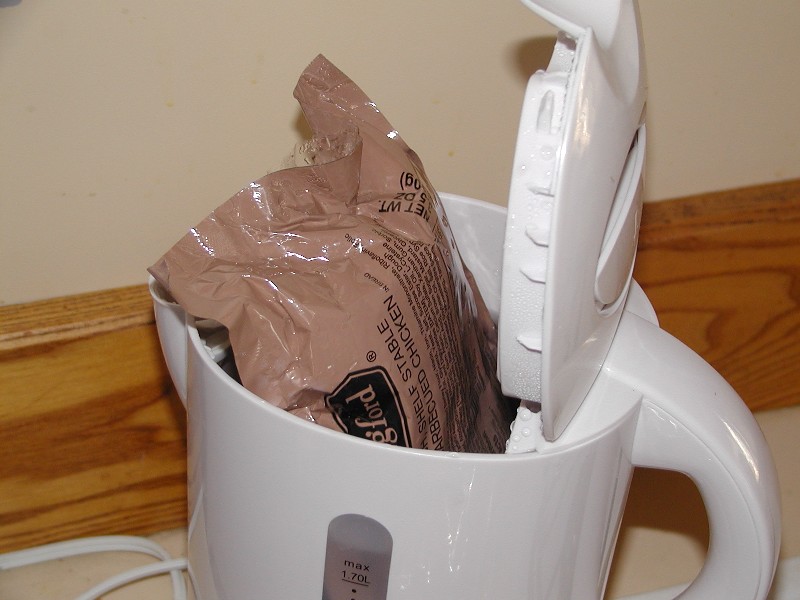 Note how the outermost plastic layer has partially separated.
Here's a close up: 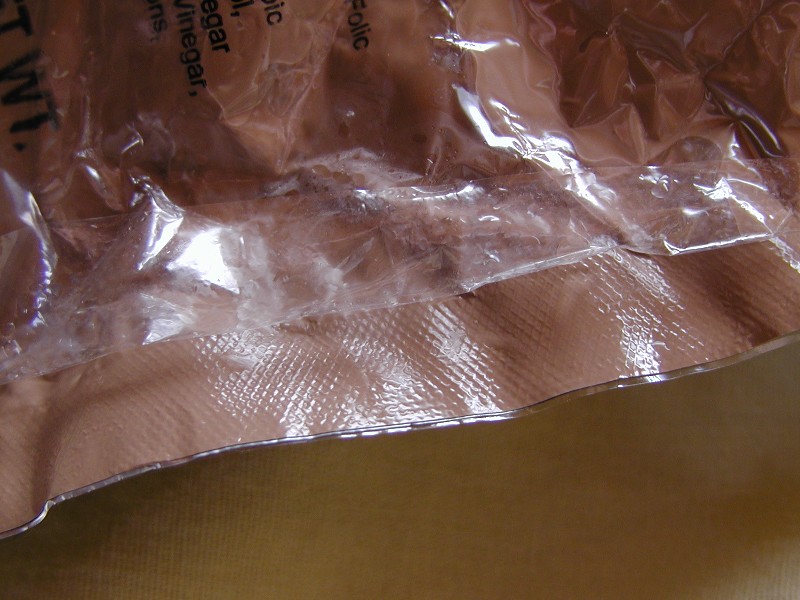 The contents were perfectly fine, so I'm mainly showing this in case it happens to someone else. Maybe it was a side effect of the steam? 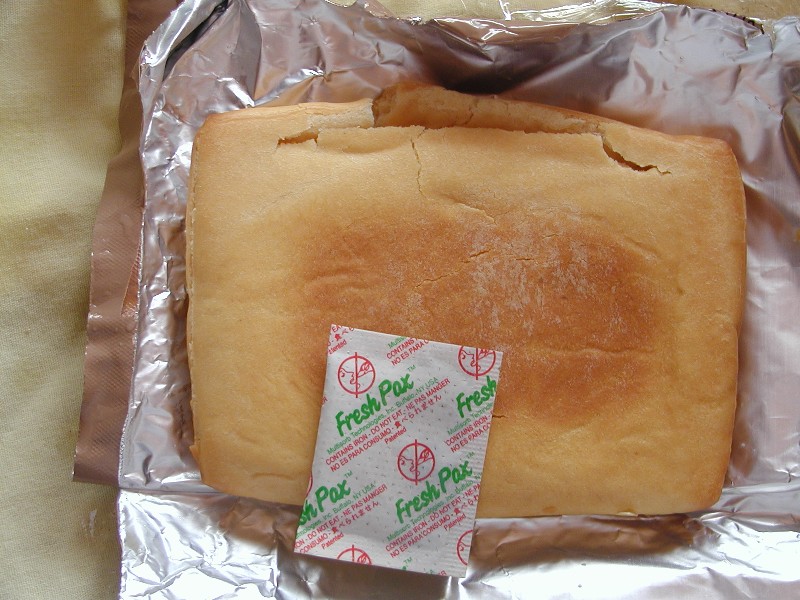 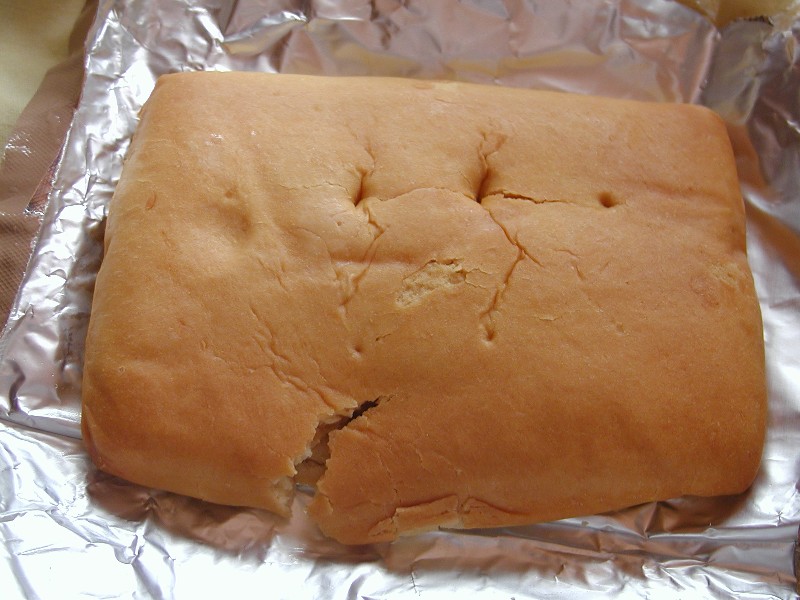 It looks ok/intriguing, but not stunning (like most MREs that aren't photoshopped).

Here's inside the bread: 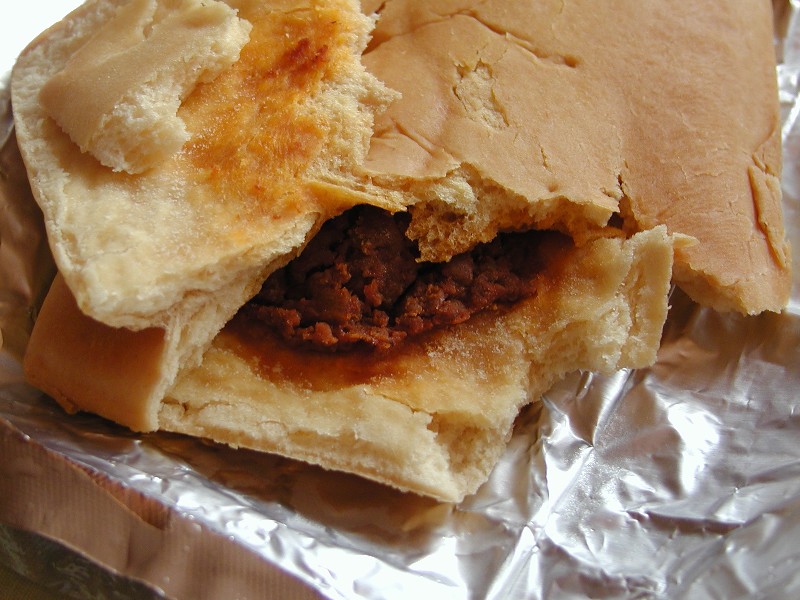 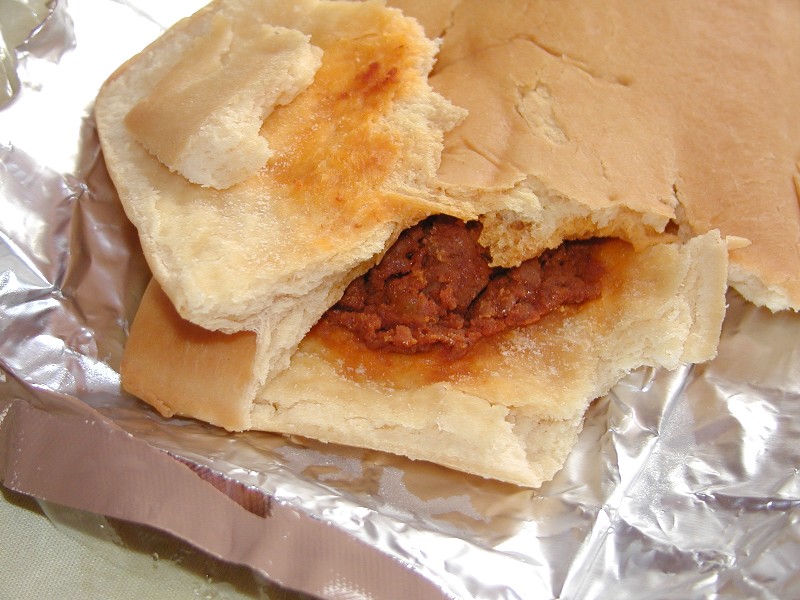 The bread was much moister than I expected, and was more esthetically pleasing/intriguing "inside".

It was a nicely balanced sauce, meat and bread. Sweet, but not overwhelming. These must have been a big hit with the troops, when they were first released. It's too bad the FSRs don't come with heaters, because these are great heated (I'm pretty sure Treesuit felt the same way).

I vaguely recall someone (probably in a different forum), comparing these to Hot Pockets. That's silly. As a Computer Geek, I am a very frequent Hot Pocket consumer, and these are better than both the equivalent and average Hot Pocket. One major advantage is that the Bridgford filling is much thicker (i.e. less runny/messy) than Hot Pockets. It can be moderately messy to eat most Hot Pockets at one's computer, but Bridgford Sandwiches are definitely keyboard friendly.

Bottom line:
I would definitely buy more of this specific variety, and an assortment of others. 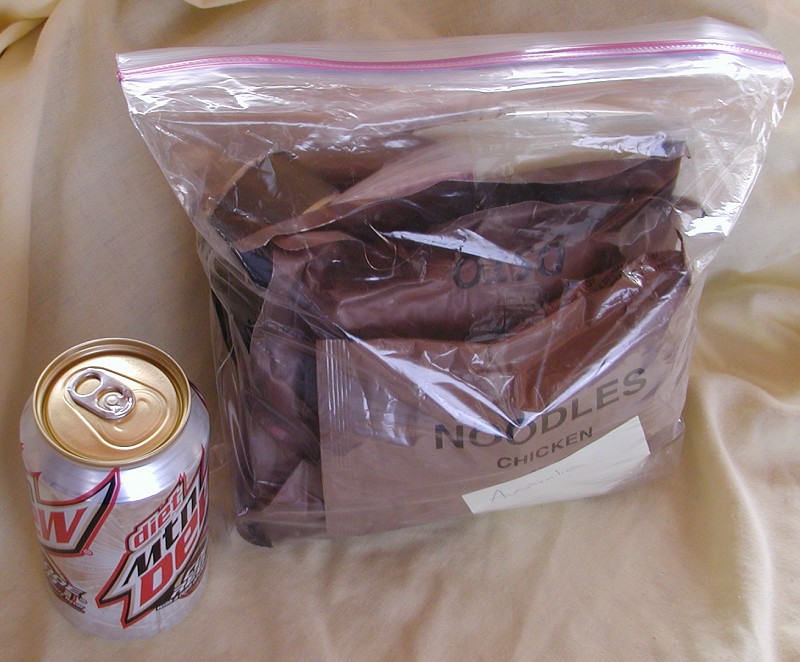 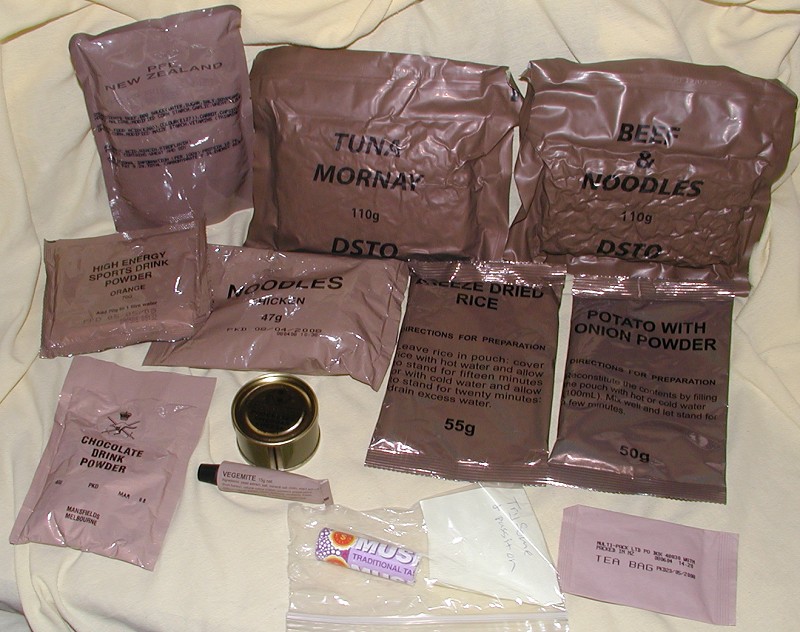 a can of cheese plus a tube of vegemite! 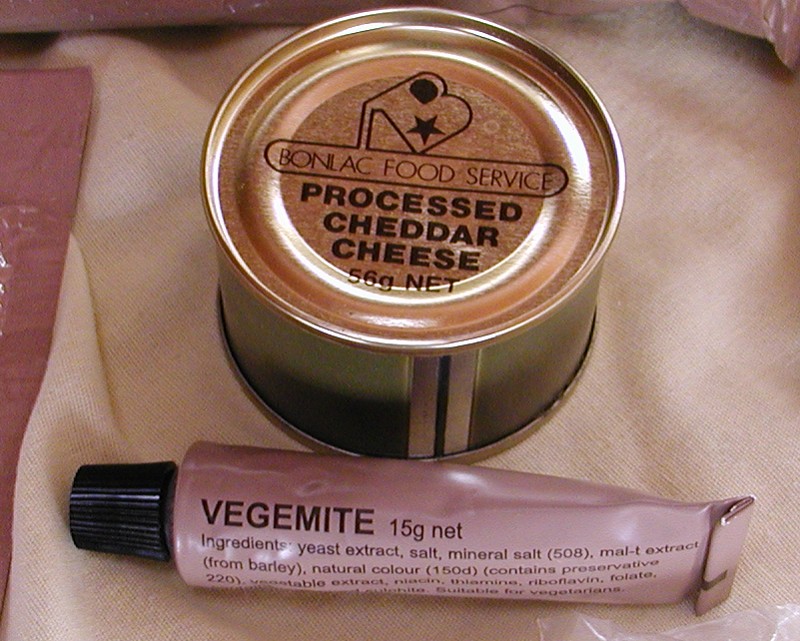 The last two were yet another major & very pleasant surprise!
I've wanted to try both, for some time, but hadn't come across any reasonably priced sample sizes.

Here's my problem - the choices are almost overwhelming.

Gang, I need your help deciding what to eat next!

I'm tentatively planning to have an Aussie feast in about a week, while watching "V for Vendetta" (get it? Hugo Weaving is a (semi/mixed?) Australian). Please help me choose!

What type of crackers do you recommend for each of the cheese and vegemite? I'm leaning towards something plain, maybe a stoned wheat thin type? Or maybe go for pure MRE Crackers?

I may wait on the cheese, and do a separate head-to-head cheese comparison. I definitely want to try the vegemite, soon.