A few months ago Name_not_found approached me about a trade. Since Adrian had already started me down the path to the Dark Side of MRE fandom, and I've always enjoyed NNF's reviews, Resistance was Futile.

Name_not_found sent me his swap package a few weeks ago, and has been very patiently waiting for my inadvertently delayed package.

A colleague/friend picked it up from our shared PO box, and emailed me that it felt very solid and heavy (his tone was both impressed and very curious).

We opened it together, and were both suitably impressed at how efficiently it was packed: 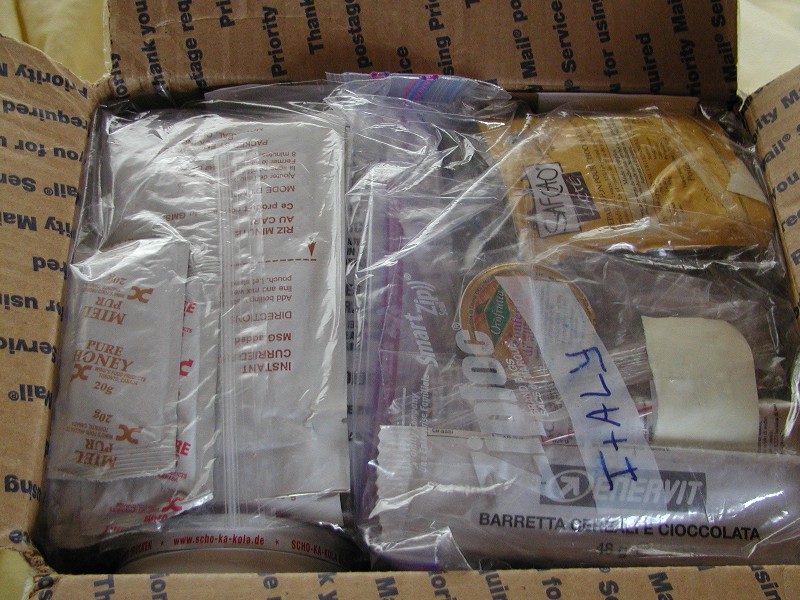 I pulled out the "Italy" bag, and was delighted at the other side: 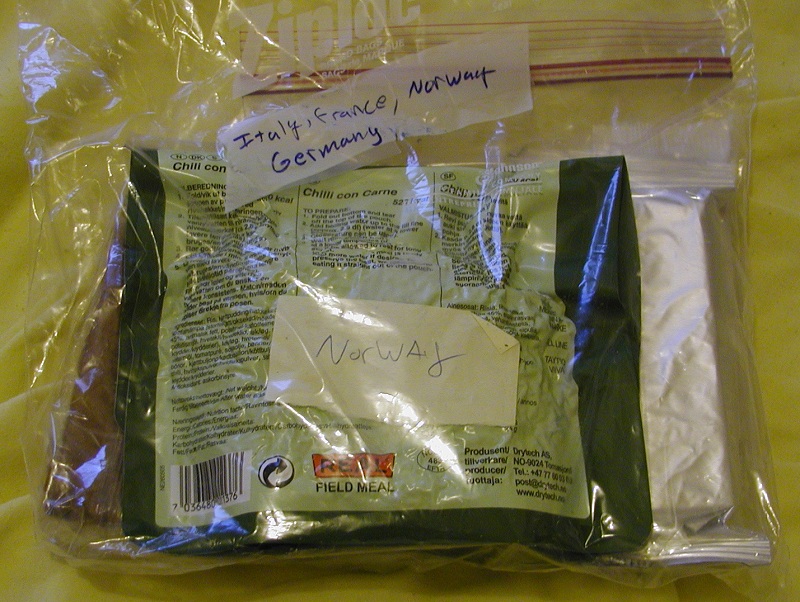 A Norwegian freeze dried entree!
I had not been expecting such a diverse set of items! 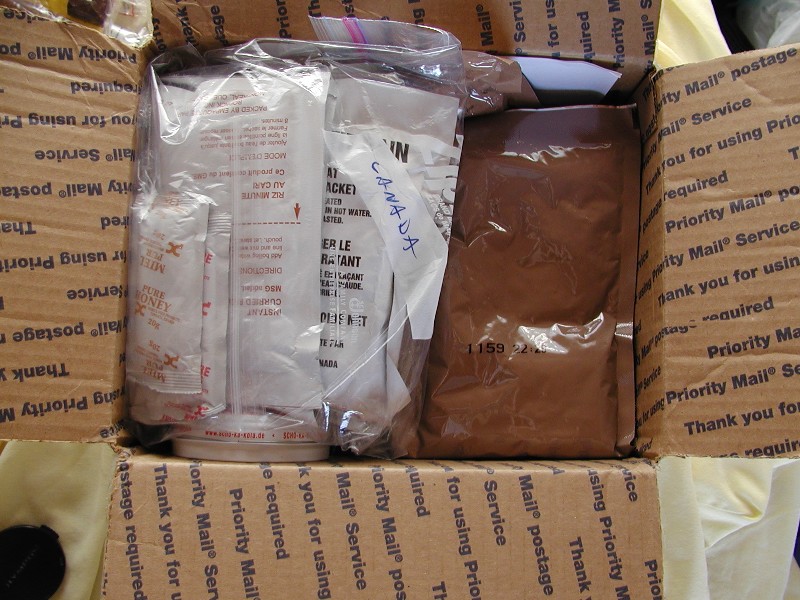 When we had been PM-ing, I had mentioned that the only non-US rations I'd ever had were Canadian, from the early 80s, and I'd like to try anything modern. NNF said he'd find something to send, but I was expecting just one or two minor items. This was enough for a feast! 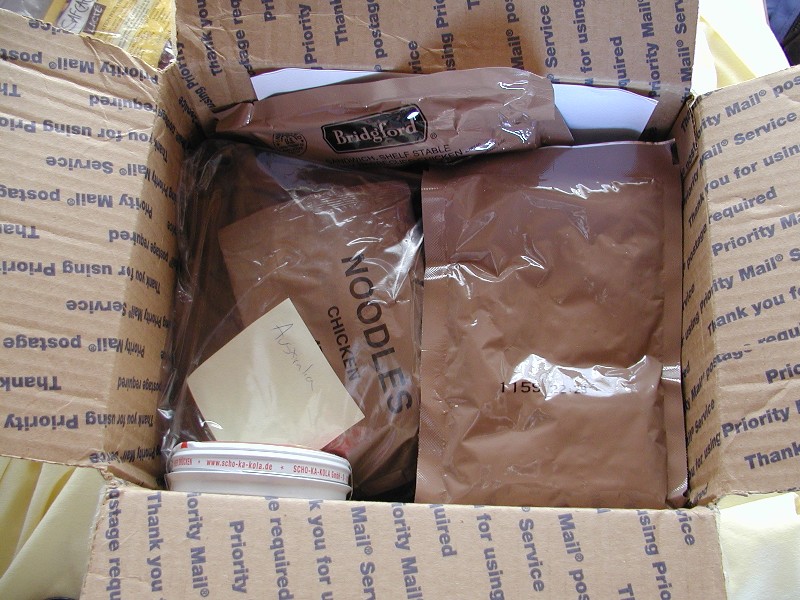 Ohhhhhh! A Bridgford sandwich, and some Aussie stuff!

And the final, big surprise... 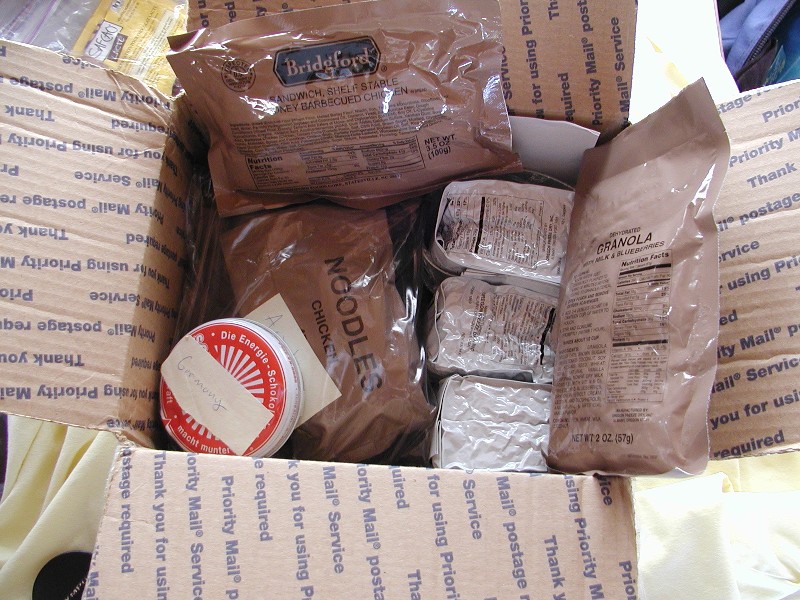 Three US cold weather ration freeze dried entrees!
One of them is nested in a canteen cup stove, which was the only specific item I had expressed interest in (NNF had listed some as being available for trade). I was so (pleasantly) surprised by the FD items, I didn't even "see" the stove, nor did my friend.

A few days later, I realized that the circular tin with "Germany" taped on it is "scho-ka-kola" (i.e. caffeinated chocolate - wow!).

The choices were initially overwhelming, and I couldn't decide what to start with. I ended up picking the first entree that had jumped out at me...

Chili Con Carne from Norway:
Last year Ration Fan posted a review of this with pictures, so the package was extremely familiar, but without the handy "Norway" label I wouldn't have known where it was from: 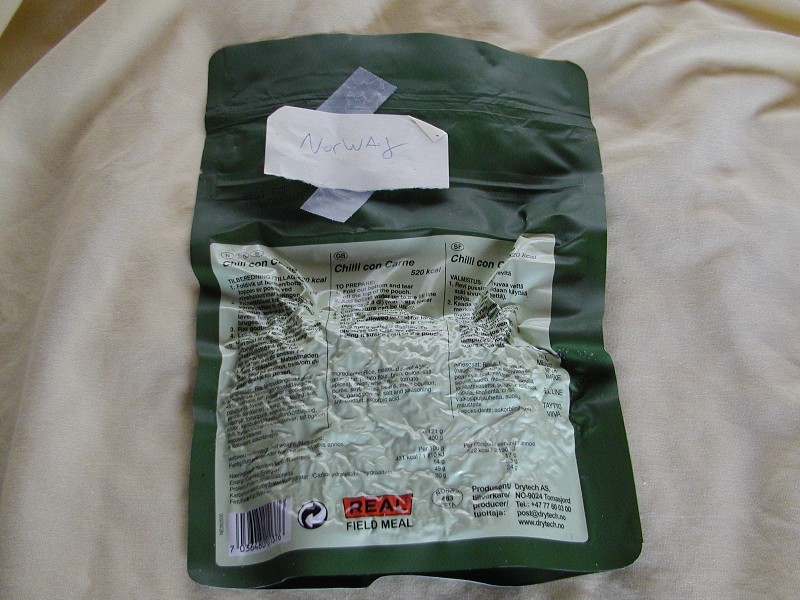 I love the trilingual instructions! 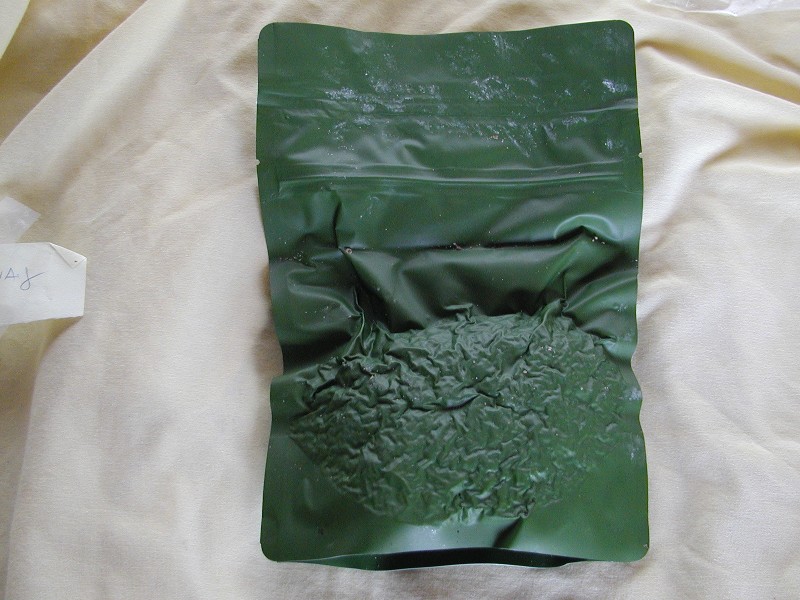 I hadn't realized from the previous review that these are vacuum packed, just like Mountain House Pro-packs.

Close up of label (instructions, ingredients, and nutrition): 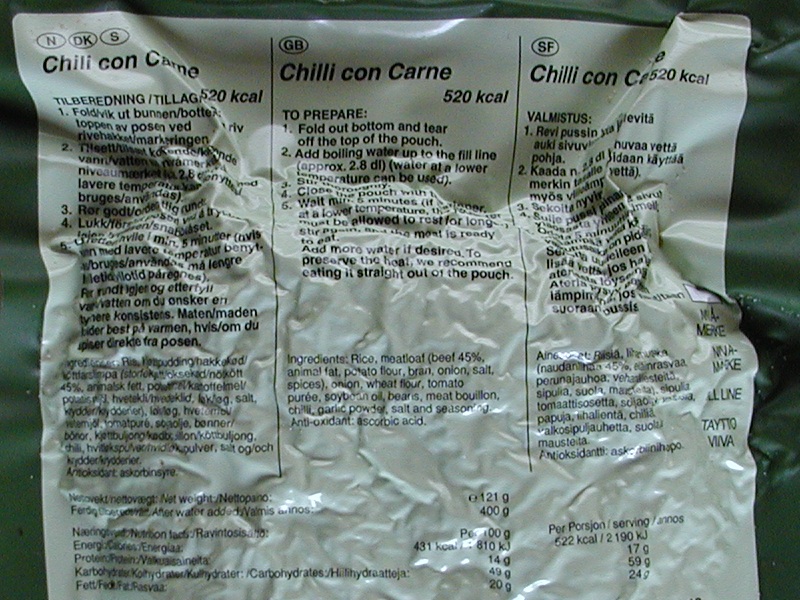 I'd never had "chili con carne" before, so really didn't know what it was. As I read the ingredients, I got excited at "meatloaf", one of my favorite comfort foods, but something I've never cooked myself (nuking a store bought frozen item is not "cooking").

When I opened it, there was a soft popping sound as the vacuum filled. 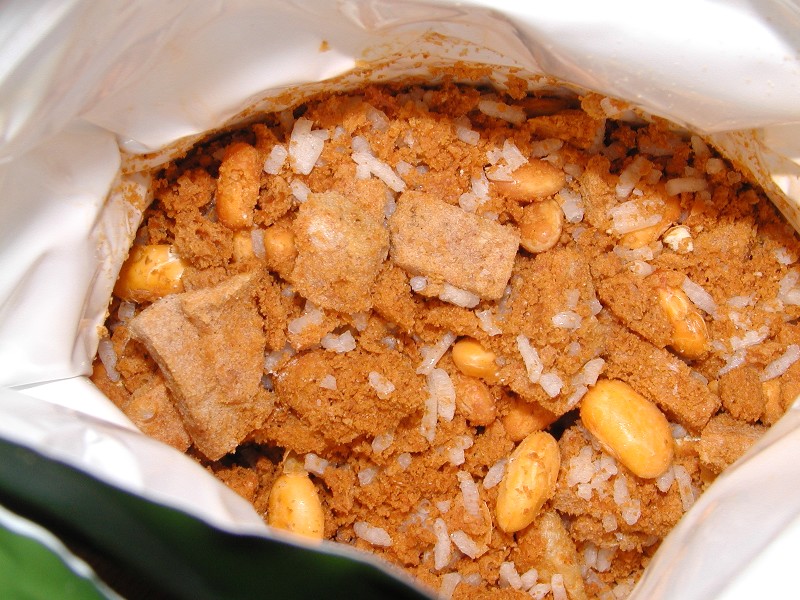 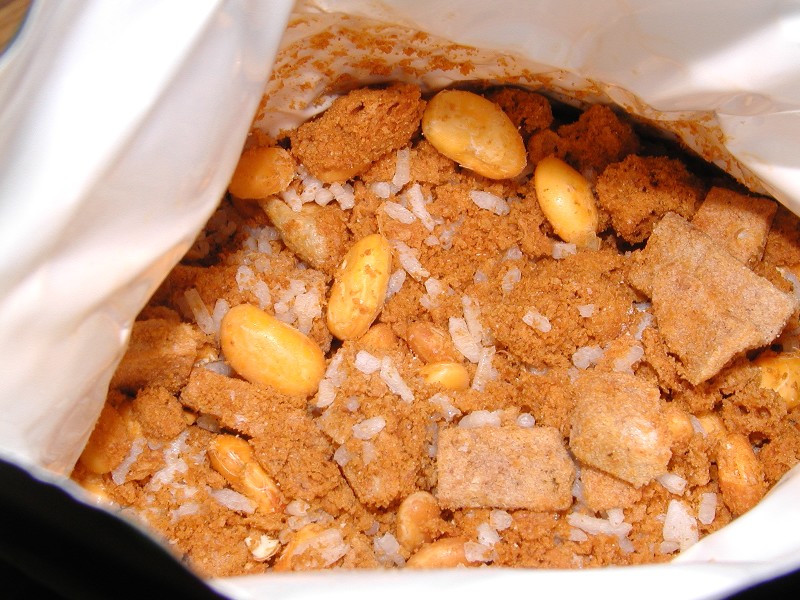 After rehydrating with hot water (I let it sit longer than the minimum time, because FD rice can sometimes be tricky): 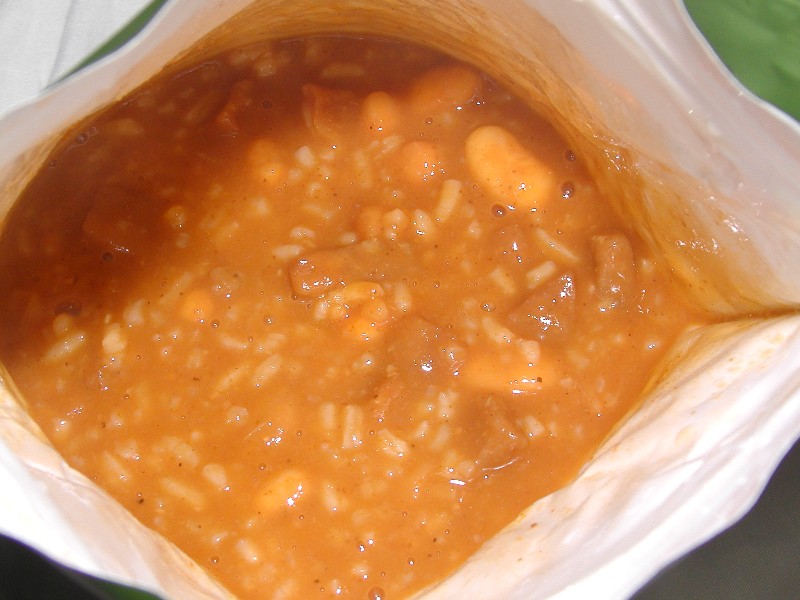 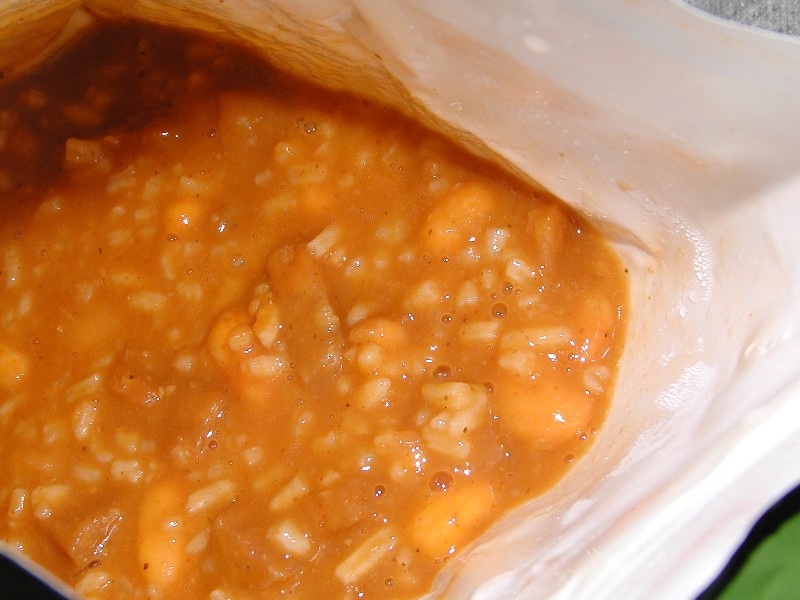 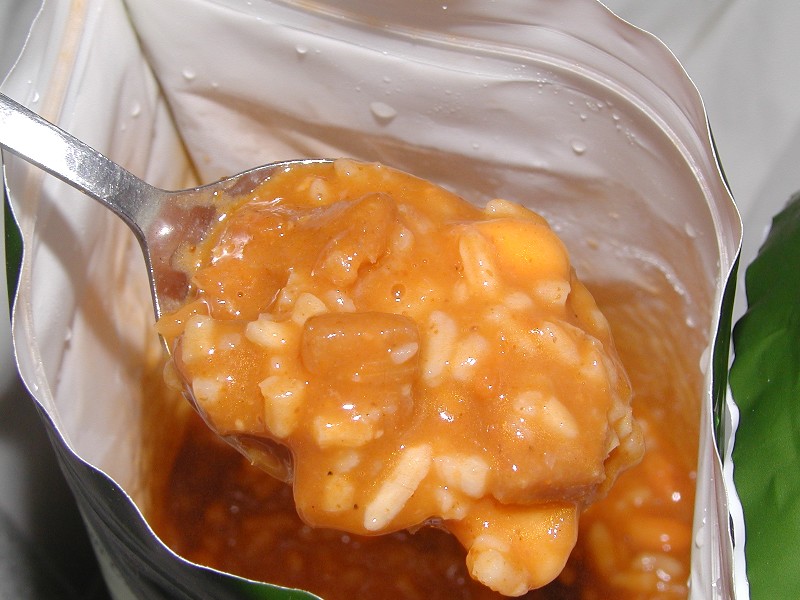 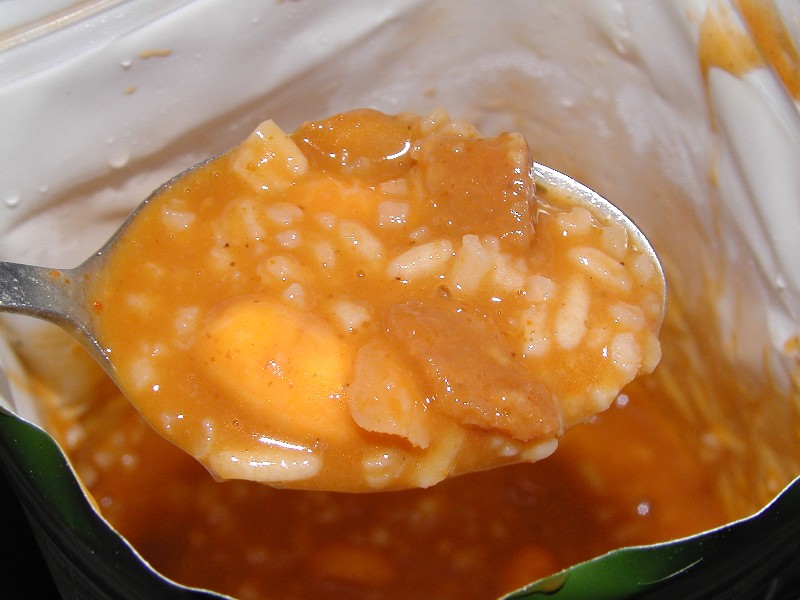 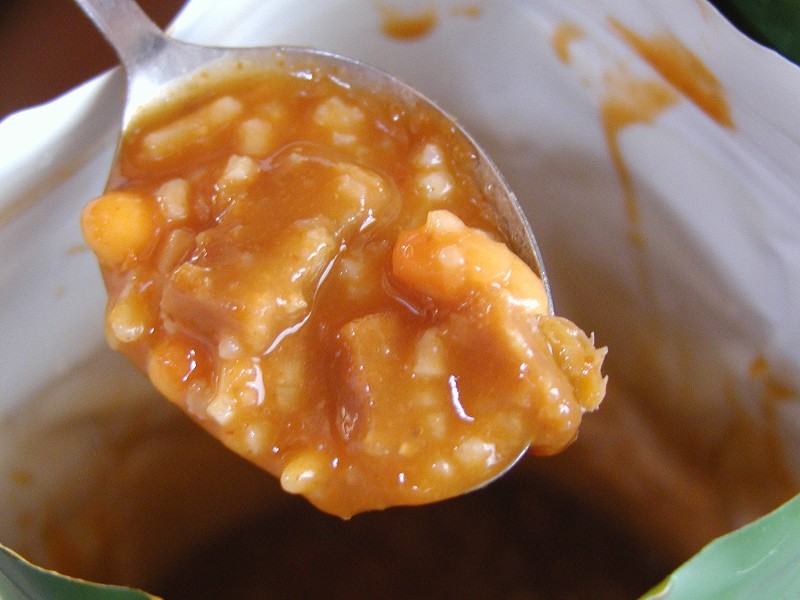 Taste:
Generally very good!
There were lots of chunks of meat (Adrian, you would love this entree!), it was only mildly seasoned (not spicy/hot), and all the ingredients complimented each other very well. The beans were initially a bit strange, being basically tasteless, but they added protein and fiber, both of which are good.

I was briefly mildly disappointed, because the meat did not taste like meatloaf. Instead they tasted like chunks of lean beef (almost like steak). I tend to think of meatloaf as having a decent amount of fat, but this tasted very lean. It wasn't "bad", just not what I was expecting. After the initial surprise, I got used to it, and enjoyed it.

This felt like a very well thought out meal, with high quality nutrition and good solid taste. This would be fantastic in a field situation.

Bottom line:
I definitely recommend it.

Note that the bag is a lot tougher than regular backpacking food bags. I have some civilian MH pro paks, and was surprised at how relatively fragile they seem.
Some time soon, I will consume one, and one of NNF's winter ration pro-packs, and do a side by side bag toughness comparison of all three.

I welcome suggestions on how to demonstrate/test their relative toughness-es!

While trying to decide what to try next, I opened up the Canadian bag, and laid out the contents: 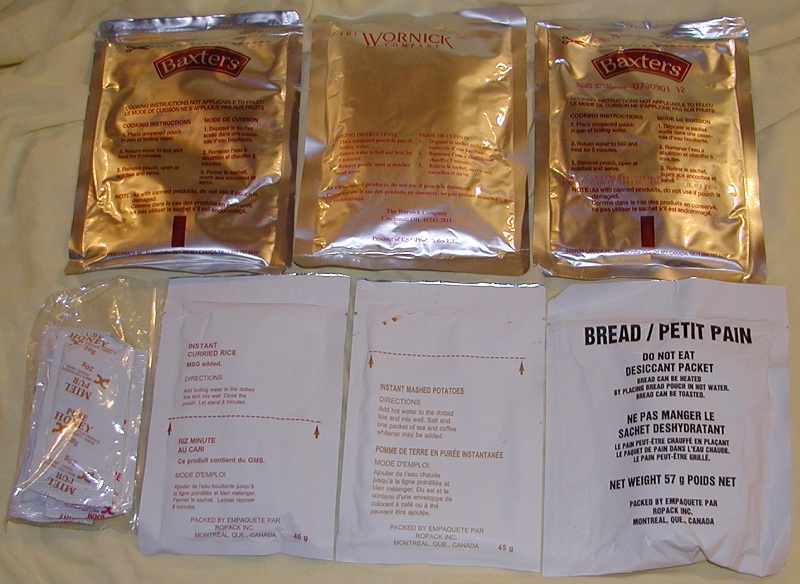 I was surprised at how little printing there was. Definitely not the information overload of US MREs!

At first glance, I had no idea what the three retort pouches were. The two "Baxter's" are spiced apples, and the big center pouch is... 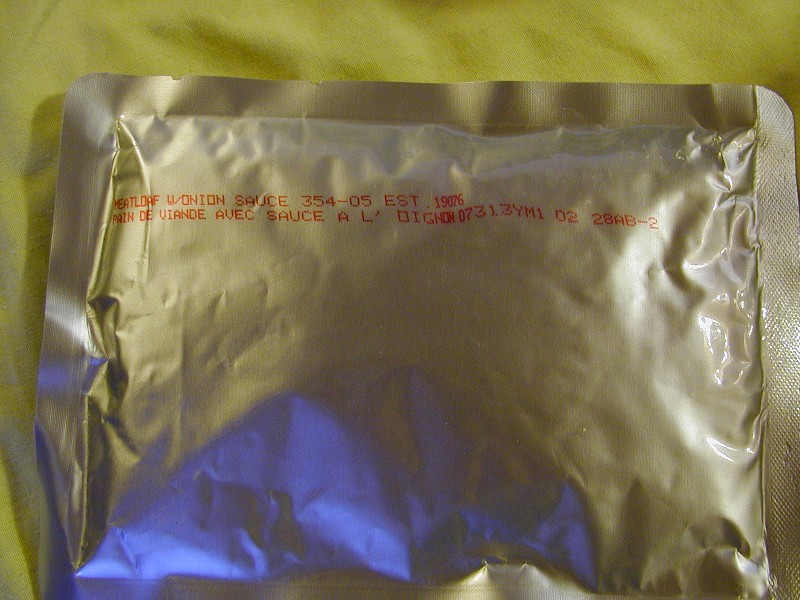 Since meatloaf was still on my brain, I instantly decided that this must be my next sample...


Meatloaf Feast from Canada:
I decided to eat it during the season debut of "Castle" (get it? Nathan Fillion is a Canadian), and decided to make it a "special" all Canadian meal: 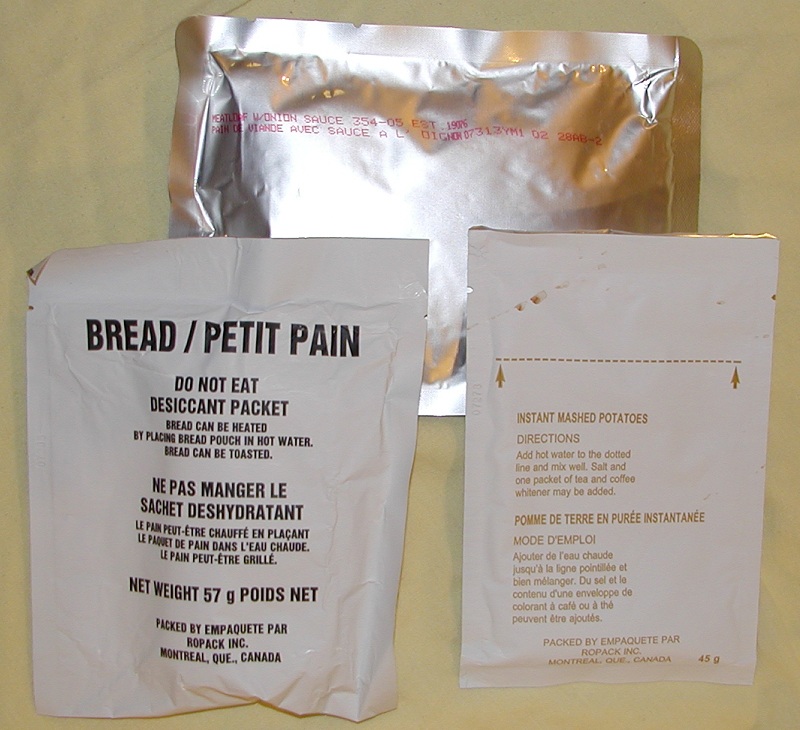 ...with both the bread and mashed potatoes: 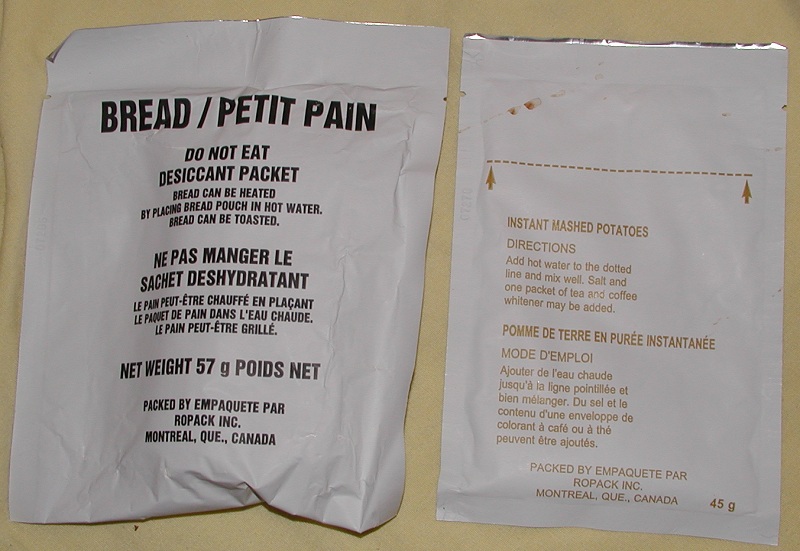 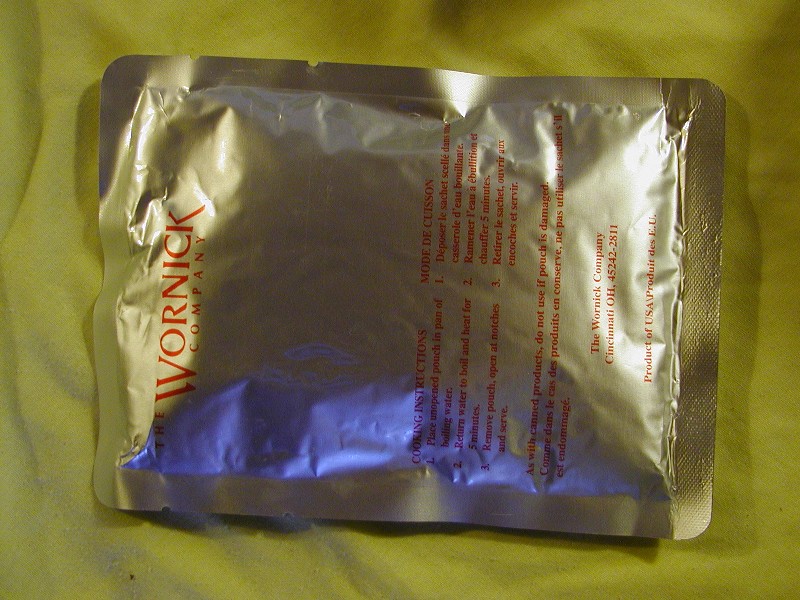 Closeup of the instructions: 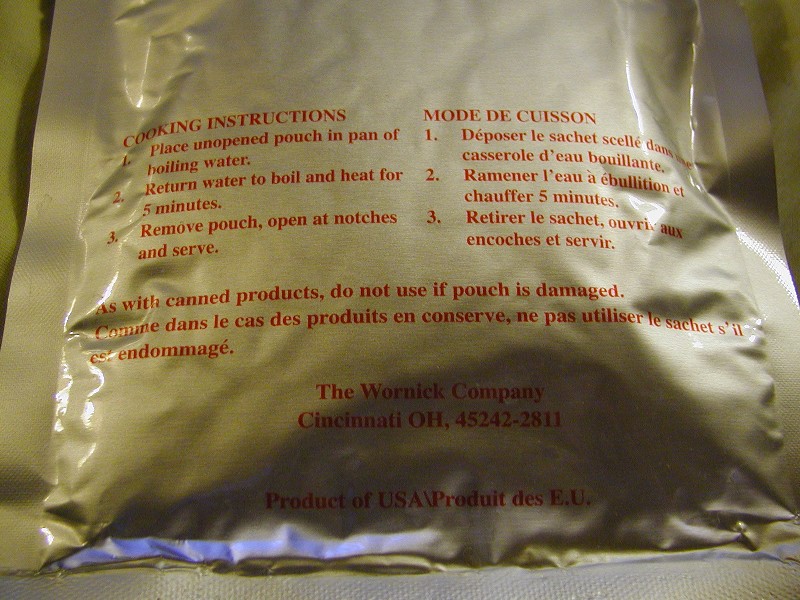 Hold on... it was made in the USA?!? Does anyone know if Wornick still makes these?

Contents of the mashed potatoes packet: 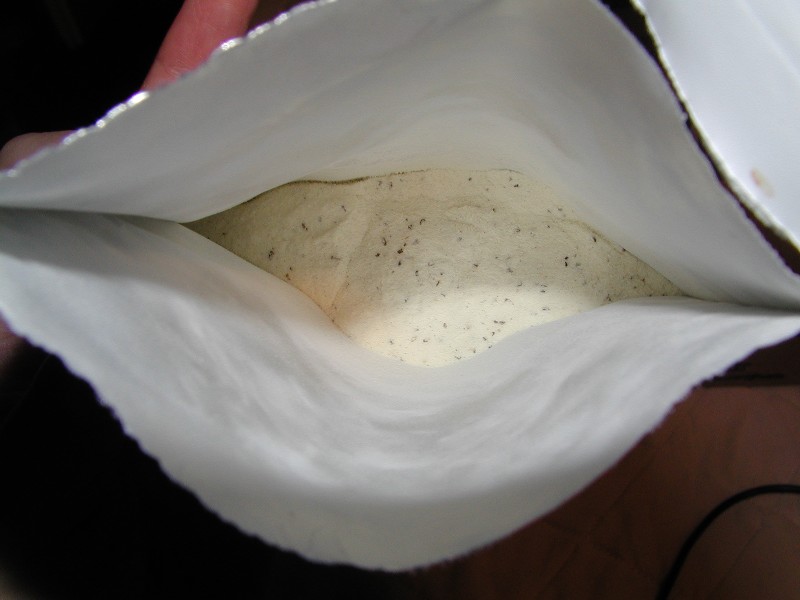 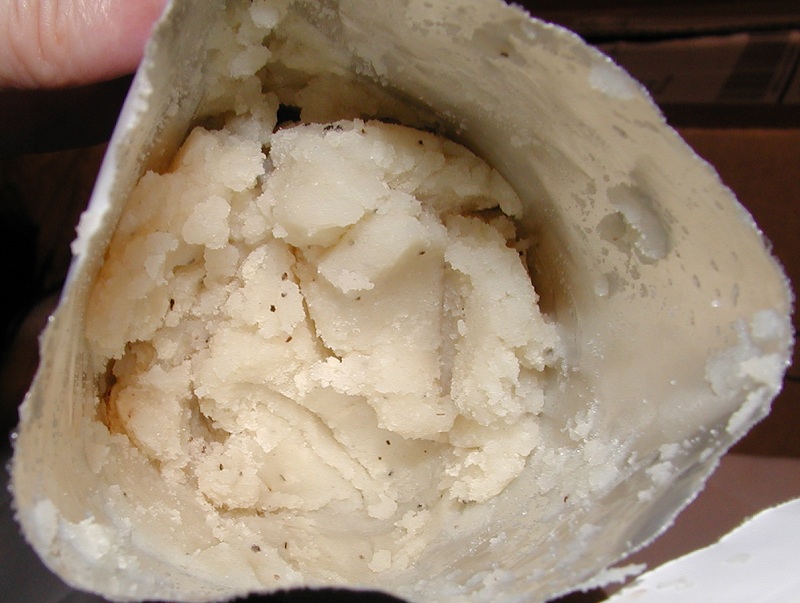 It was mildly seasoned (I'm not sure with what), and was good. I was very nervous about putting in too much water (it did not give a precise amount, and "fill to dotted line" can be inaccurate), which can lead to a soup like substance instead of perfectly "whipped" potatoes, so I added the water in steps, mixing after each addition, and it turned out very well. There were a couple of small clumps of powder, but better that than "soup" (IMO). I was impressed that the bag held up to the boiling water and my clumsy multiple mixing cycles.

The bread packet said it could be immersed directly into hot water, so I inserted both it and the entree directly into my uber-cheap kettle (turned off, right after the water came to a boil): 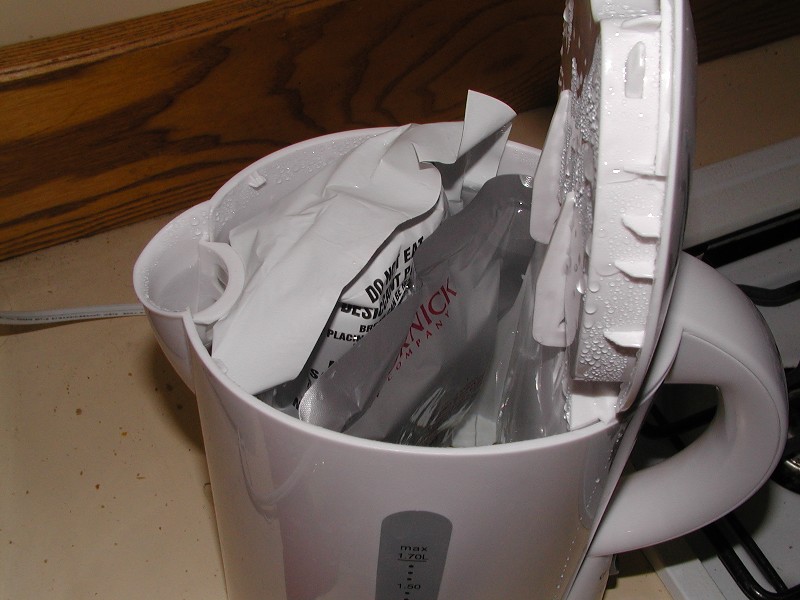 I bought this kettle about half a year ago to replace my first cheap one which had started leaking a month or two after I bought it. It was even cheaper ($12.84 at Walmart) than my first, and much bigger, but it's been great! It's already insulated and is large enough to heat two MRE-type items, so no extra pot is required. It's nice and minimalist, perfect for a modern Nomad.

I usually store my Thermos food jar inside, so there's no net volume waste.

I left them a bit longer than required, while I was mixing up the potatoes (first using some of the freshly boiled water to rehydrate them - yup, one batch of boiling to fix all three items!).

I opened the bread first: 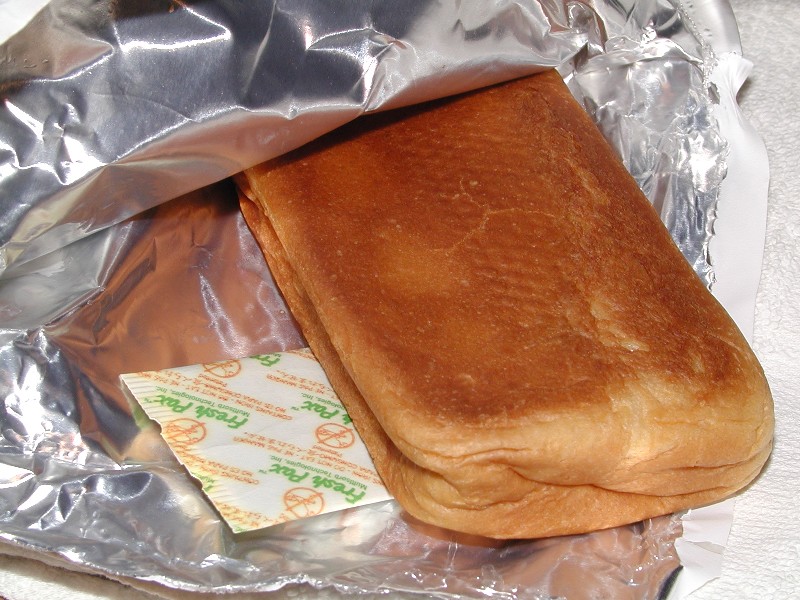 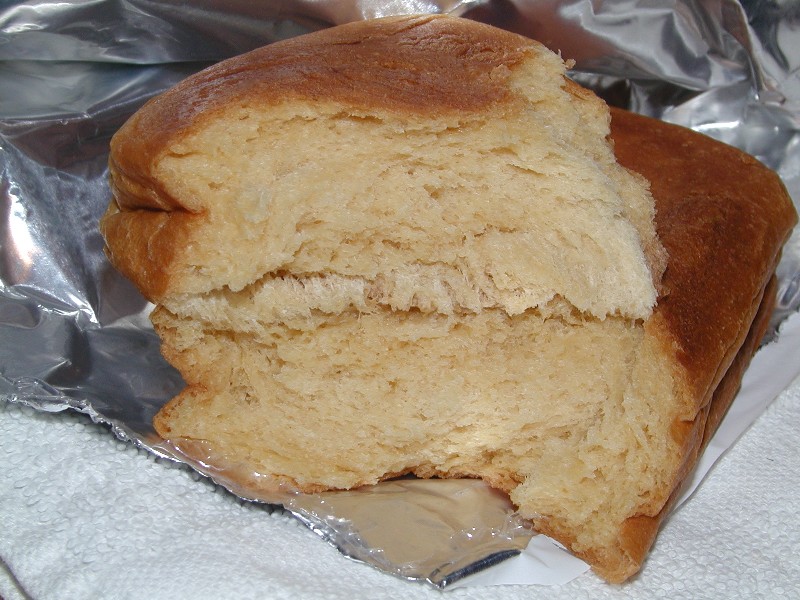 It had a nice aroma and tasted much better than I had expected! I'm really glad I heated it. There was only a very slight chemically taste in the first bite, which was not noticeable in subsequent bites. Part of that might be that I ate the rest in combination with the other items.

Next day, when I downloaded the pictures, I realized for the first time that the bread was almost five years old - wow! It tasted as fresh as any grocery store packaged bread!

The meatloaf was perfect: 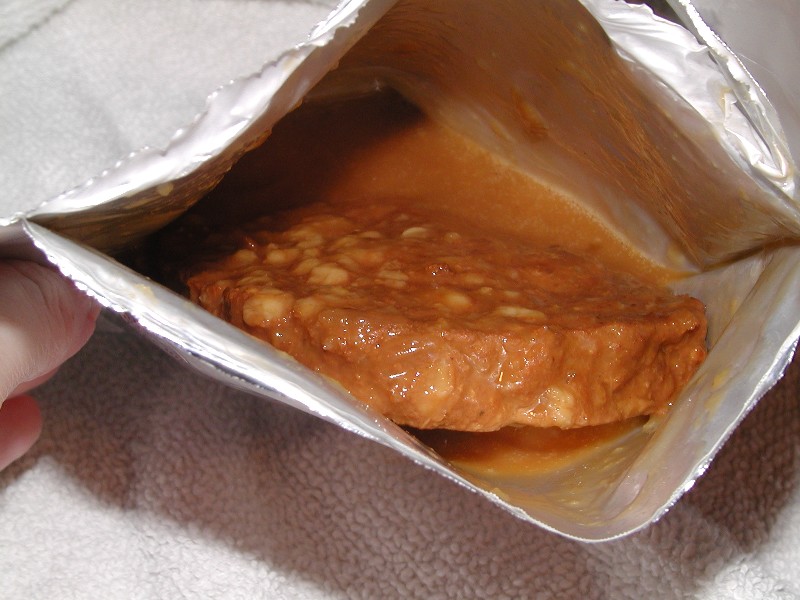 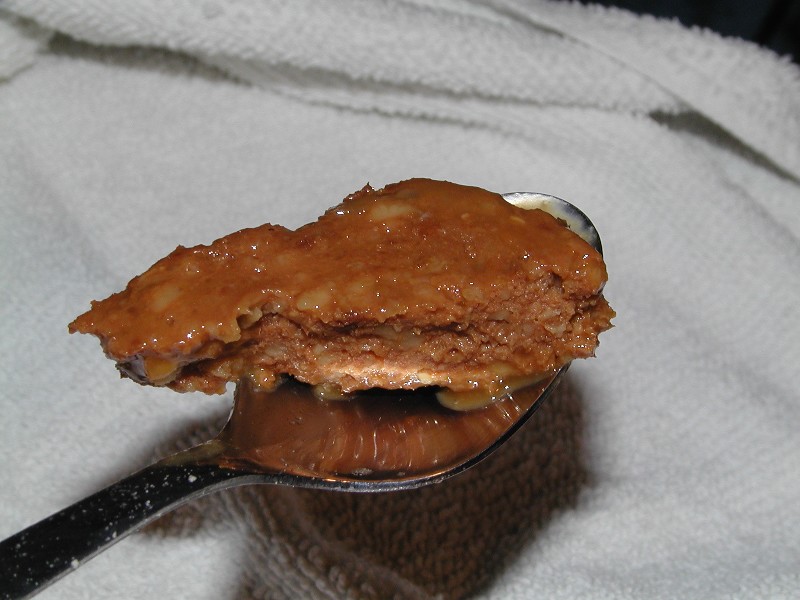 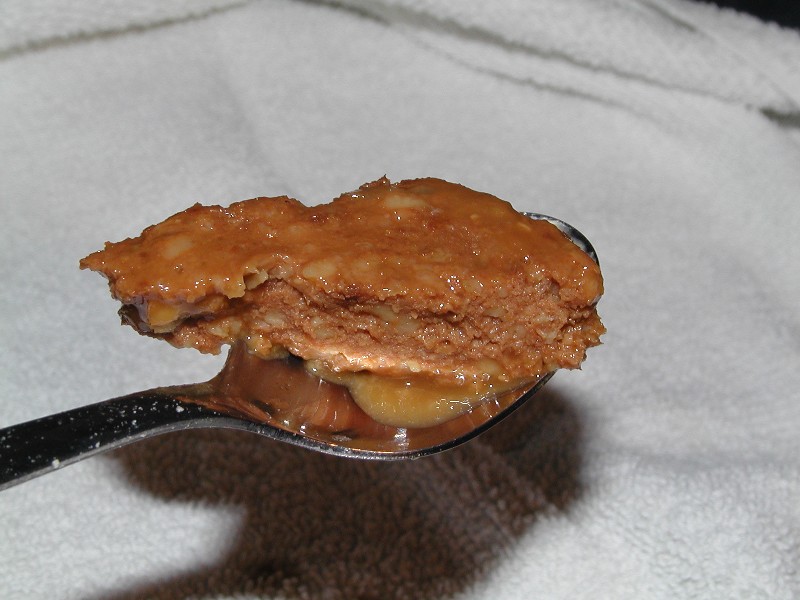 It was a big slab of meat, in a nice, understated "onion" sauce (I wouldn't have guessed that - onions can put me "off", but this definitely did not).

All three were perfect together.

Bottom line:
I definitely highly recommend this entree and the whole meal.

Ma'am, that's why I raise prayers for Norge, to come back on the forums. Norwegian food are the best FD food, period. Anyway, I have some Germans travellunch to send you, I hope that will not take 3 months to reach you, as in case of Bypah.

Anyway, NNF made a very nice selection there.

Thx for sharing the pictures and doing a great review. Norwegian FD are the best to me, equal with Mountain House.
A very nice package you got, you will like the German Scho-Ka-Kola. It was already in use with the German Wehrmacht in WW2.
https://www.facebook.com/Einmannpackung ... 599910405/
Top

Thanks for sharing. It looks delicious

Sneak preview:
It's not clear from my pictures above, but the Australian sub-bundle is significantly bigger than any of the others. It even has a can of cheese!


ak70g2 wrote:Ma'am, that's why I raise prayers for Norge, to come back on the forums. Norwegian food are the best FD food, period. Anyway, I have some Germans travellunch to send you, I hope that will not take 3 months to reach you, as in case of Bypah.

Anyway, NNF made a very nice selection there.

I share your concern for Norge, but I remember that he mentioned he had some life stuff to deal with, and I know how that can chew into hobby time. Plus, he has kids.

I'm looking forward to whatever you send, and no worries on delivery time.

I had the chance to taste a Norweigan rations and all I can say is that is awesome!!!!!!
By the way...Adrian, your box is still waiting here for another swap....

Bypah wrote:I had the chance to taste a Norweigan rations and all I can say is that is awesome!!!!!!
By the way...Adrian, your box is still waiting here for another swap....

Stay cool, I didn't forget you. This month I'll send parcels for Yowie, NNF and Luis (and post fees to Australia is a killing), next month will be your turn, Treesuit and TurtleNomad, if she will be ok with relocation.

Bad news: I try to get another batch of chinese

Great Start!, cant wait to see the rest of the items reviewed.

And i bought one of the water kettles at your recommendation, so far its great.
Ration Reviews: USA, Australia, Canada, Japan, Italy, Germany, France, China, Spain, Russia, Lithuania
Wish List: Rations from anywhere I haven't reviewed yet!
https://www.youtube.com/channel/UCnlQPi ... kQXu87uUCA
Top

I'll second that notion on a water kettle, they're pretty handy to have around the house if you don't want to wait for a boiling kettle. I had one one in Iraq in 2004 and and it went with me on several moves. It was great for heating up coffee and cocoa on some colder nights but alas it does develop calcium deposts on the heating element and it just gave up one day for no reason,

Since then I have yet to find a good water kettle that will stand up.