As some might know, I currently serve my 23-months conscription in a MP company. From time to time we get new soldiers who change their units in order to become a MP sergeant. We got a lance corporal (who was later promoted to corporal) from the a LRRP company.
The new German "EPA, leicht" ration is a lightweight combat ration designed for soldiers of the "Division Spezielle Operationen" or "special operations division" to which our LRRPs belong, too. So said corporal was issued with EPA, leicht rations and because he knows that I store military rations (and sometimes eat them

) he gave me some constituents of a EPA leicht ration he had around.
Of course I tried them because I´m more the "eater"-type and here´s my small review about the EPA, leicht constituents I tried:

Main meal: Pea stew with bacon
Both main meals in the EPA, leicht rations are freeze-dried meals. At first they were produced by Travellunch but some time later they were replaced with Veris-made meals. Freeze-dried meals are very light-weight (80 grams) but on the other hand you NEED hot water in order to eat them. Heating up EPA meals with an ESBIT cooker in the field takes some time, but heating up a cup of water so that it boils takes alot of time, too. Also you need to carry more water around. So all in all it might be not the best idea..

You can clearly see the peas.

After I added 300ml of hot water that´s how the meal looked:

Lots of peas, some smaller, quite crunchy pieces of dried onion and some small pieces of bacon. All in all the taste was ok. The dried onions made it mildly spicy. The only thing I found not so good was that the meal was a tad watery. My friend told me that he had to live for one week from EPA leicht rations and the most annoying thing was that there wasn´t really anything to chew on.
All in all the meal was ok and quite filling. I´m personally not a big fan of freeze-dried meals,though because of the time it takes to heat the water and the cat that in a worst-case scenario you can´t eat that stuff cold. I´d rather have a good old hearty EPA meal, instead.

Wheat cookies
The EPA, leicht ration not only contains new main entrees, but also new cookies. For some reason the (in-)famous "tank plates" were replaced with new cookies, which contain alot of calories, too (around 500!).

At first I was a bit sceptical because I´m a huge fan of our good, old Panzerkekse and didn´t knew what to expect. As soon as I tried my first cookie, though I was surprised. The cookies are soft and have a sweet taste. They reminded me of civilian cookies you can buy here. After finishing the whole box I was quite full of course!
The cookies are really good and a nice change from the Panzerplatten, but I guess we´ll only see them in EPA, leicht rations.

A typical trekking bar with lots of calories (almost 300) that is produced by Trallunch. I didn´t knew what kind of taste I should expect but my first bite confirmed my scepticism. The taste was really bitter and I had to force myself to completely eat it. Yuck!

Next was the nutrient powder:

It looked like chocolate powder and slightly smelled like "Kaba" or any other similiar product. The powder is suppossed to be mixed with around 150 - 200 ml of water which I did. This is the terrible result:

A brown, odd-smelling soup with small clumps of powder. Even after stirring the whole mess there was a big number of clumps. The taste was pretty bad, too, with only a slight taste of chocolate. After I finished it my stomach was in a real uproar. I´m not sure if something went wrong with the package or if that whole concept doesn´t work, but I´ll probably never try that stuff again, if I should ever get another chance to eat it...the worst of the constituents I tested!

Conclusion
All in all I´m not really convinced with the new EPA, leicht concept. It might be really light-weight, but on the other hand you have to carry more water, too. The taste of the what I tested is worse than standard EPA constituents. The only really good thing were the cookies. I´m glad I had the chance to try some of that stuff, atleast I learned that our "special forces" not necessarely get better food than standard troops. The ration needs some serious re-thinking and re-construction in order to improve it.

I hope you liked my little review! Feel free to discuss anything on topic here

Nice review, just wondering what the outer package looks like? You know the main bag where all the contents are assembled? Does it look anything like the main meal? If you get another one I'd like trade you one of my FSIR's for one. Sometimes American tastes are different than ones in Europe, so I'd really like to try one out.
Top

Thanks for posting. It´s the first time I saw close ups of the new EPa leicht dishes and the Weizenkeimlinggebäck.

I´m happy we agree in conlusion. EPa leicht is a nice gadged, but a "Milchmädchenrechnung" (pipe dream) as you always have to carry extra water. The biggest disadvantage of freezedried rations is, you can´t eat them without adding extra (hot) water.
The taste of the freezedried rations is "nice", but "nice" is the little sister of "shit"

You must pimp them (EPa leicht) with a dash of everything you can get!
They are a no-go compared with Norwegian and Mountain House. Also they don´t have a zip-lock closer that keeps the heat in while soaking.
To me, they are totaly overpriced.

I had the "Weizenkeimlingkekse" (crackers) too. They are great - but "greasy". Eating them makes you feeling you must wash your fingers.


Treesuite wrote:You know the main bag where all the contents are assembled

Brian, they come in a card board box: 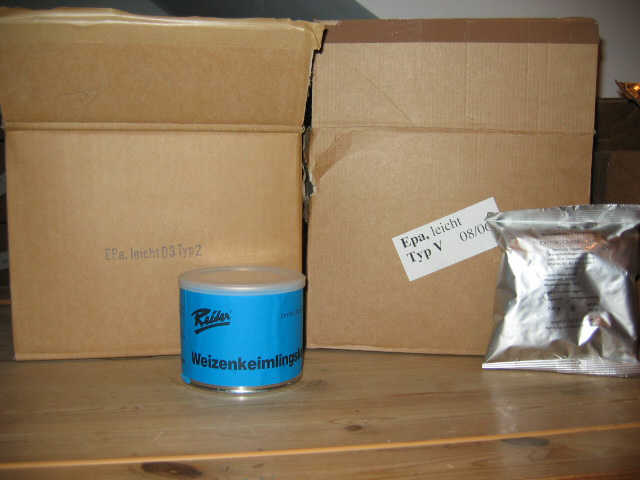 with food for four soldiers for a day (or for one soldier for four days)
https://www.facebook.com/Einmannpackung ... 599910405/
Top

Thanks for the replies, Treesuit and Housil!
Unfortunately I got the food loose, since it was the rest of what my comrade got issued. Alas the chances of getting more EPA leicht stuff are rather slim. Only DSO members (more specificaly: "Soldiers who have to stay behind enemy lines are being equipped with EPA leicht rations" = mostly LRRPs and other special forces) are being issued with them and since I don´t have any contact with DSO members and said Corporal ran out of what he had left from exercises I´ll probably won´t get any...but trust me, your not really missing out something, these rations are a real let-down, compared to classical EPAs.

Have you ever had some "Travellunch" made EPa leicht entrees before? 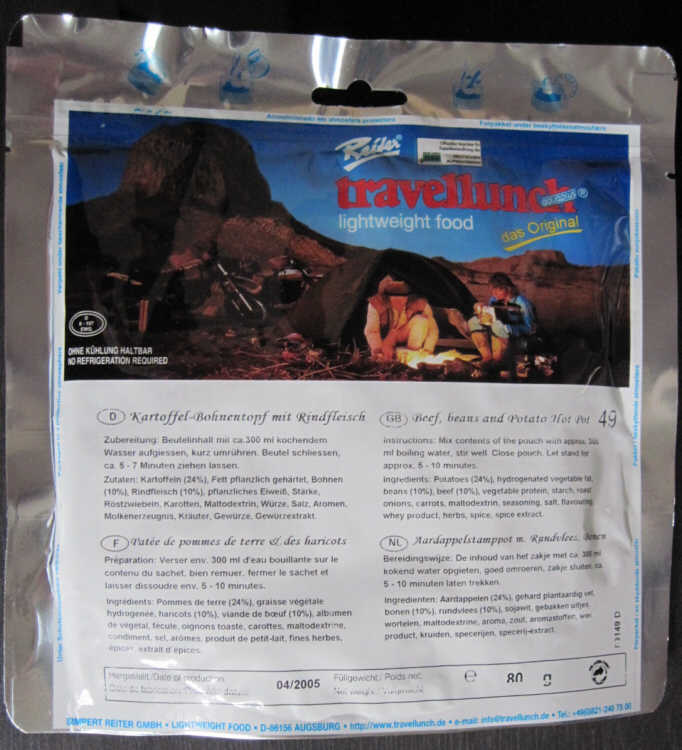 I´d like to know how the new VERIS made are tastging compared to them.
https://www.facebook.com/Einmannpackung ... 599910405/
Top

Unfortunately I haven´t tried the Travellunch meals. The Veris meals were the very first freeze-dried meals I ate.
The Veris pea stew was a tad dull and I´d liked to add salt and maybe some pepper in order to spice it up. Unfortunately I didn´t get any other main entrees, so I can´t really say anything about the quality of Veris products and how they compare to Travellunch. My comrade told me that the meals he had to eat weren´t that great so I guess the Veris meals are no match for classical EPA entrees.

A spoon-full of pea stew. Unfortunately there wasn´t alot of bacon in it...

Perhaps that said such corporal would like one of my FSIR's instead of that EPa Light...

I´m pretty sure anyone would prefer your FSIRs instead of an EPA leicht, but unfortunately I got his last parts he had at home. And since he´s no longer a DSO member he won´t get any unless they turn Military Police into special forces...I´d love to swap an EPA leicht for your FSIR, but my sources are "dry" now. :/
Top
Post Reply
8 posts • Page 1 of 1