As I've mentioned, CheaperThanDirt is deep discounting all their civilian cases.
Resistance was futile, I ended up buying one of each last month (2012-October), just before I moved. Here's some objective data on them, and my purely subjective opinion.

I'll start with a quick overview, mainly to give everyone enough information to decide whether they want to buy any of these, while the prices are still so low.

Here are all four boxes (left side - the stuff on the right is three boxes of poly trays on the bottom, with MRE entree/side items on top, all also bought on deep sale at CTD): 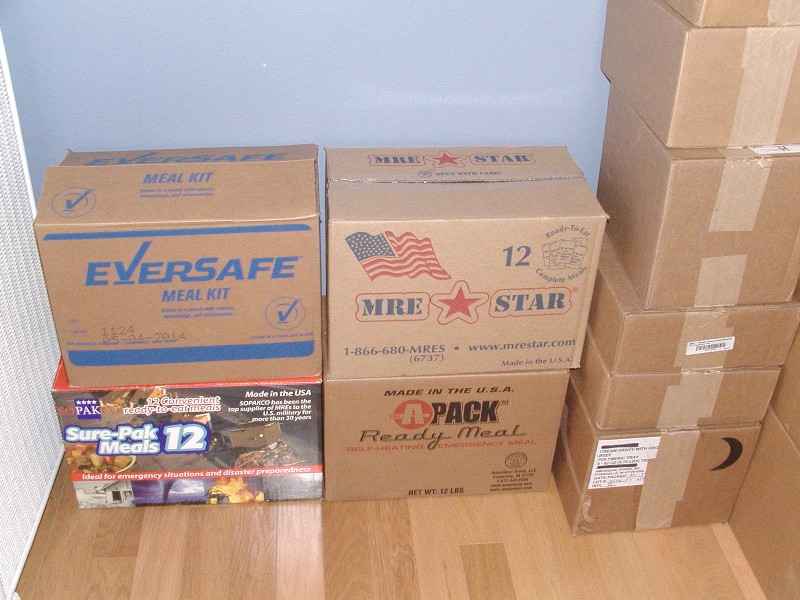 I'll be posting a ton more pictures, as usual. KMan, I promise to take a side-by-side picture of all the spoons!

Note that all four current CTD cases were produced in (roughly) mid-2011, and all come with heaters (and accessory packs), which makes all of them an impressive bargain at only $49.93 or $54.93 per case.

And now, the quick reviews, listed alphabetically (prices are without shipping, which is roughly about $10 per case, depending on where you live and how much you order):

aPack is usually the cheapest at all vendors, and has the best calorie to cost ratio.

The main problem is that the non-entree items have almost no variety, and are the nutritionally "junkiest" of all four cases. Yes, I'm referring to the "toaster pastry"! If I had to live for a week or two on just aPacks, I would get very tired of the toaster pastry (i.e. "PopTart") almost immediately.

The other universal (all menus) extras are: crackers, peanut butter, oatmeal or chocolate chip cookie, lemonade beverage base powder. Two menus have raisins, and two have a single peppermint hard candy.
Yup, that's it. Yawn! Part of the fun of MRE "complete" meals is finding new stuff. aPacks are a "smart" buy, but they're not a "fun" buy.

Those extras may be more popular with kids (and even some adults). If you have other shelf stable items to balance them, these are a good, affordable way to get started with "complete" MREs.

EverSafe was a pleasant surprise. I had the vague impression they would be the worst, but they have some cool stuff, and many come with two dessert items. The weird thing is that there were no spreads (i.e. peanut butter), though all but one menu had crackers. The lack of peanut butter explains the calorie difference, so adding your own spread would be a great option (even better, you could choose what spreads, instead of limiting yourself to peanut butter).

Most menus have: crackers, lemon-lime beverage base powder, either M&M's or chocolate chip cookie, and one or more of: pound cake, cranberries, dairyshake, toffee crunch cookies, kreamsicle cookies, raisins, skittles.

Note that CTD's calorie ("818") description is wrong, and these have about 230 more calories per menu (average of 1048 per menu) than CTD's page claims.

This MRE*Star is a special "3 Square" case, with two interesting breakfast menus, as well as four of their regular menus.

The main issue with MRE*Star is that all the "regular" menus have the exact same extras: dry fruit, nut raisins mix, sugar cookies, powder drink mix (two flavors). The fruit/nut snacks are probably among the "healthiest", and I enjoyed them. The sugar cookies were very disappointing (IMO they are worse than the poptart/toaster-pastry).

The secondary defect is the complete lack of desserts. Technically the "sugar cookies" are a dessert, but every regular menu has that exact same item, which is just not the equal of most MRE desserts.

Sure-Pak has the best overall variety of extra items, with each menu coming with a different "side" and dessert.

In the current CTD case, two menus did have oatmeal cookie, but all the other desserts were unique, including: mocha dessert bar (which is great!), cornbread, Cinnamon Scone, and caramel apple Ranger bar.

My biggest disappointment was the lack of vegetarian menus. I also felt a wee bit cheated that there was only one of the most exotic entree ("Chicken Garlic Herb"), when the civilian case norm is to have two of each menu (one to try, one to store, right?).


My Advice:
At these prices, all are bargains.

Despite various date claims, pretty much all of the components are from 2011, roughly the middle of that year. I moved that line down in each review, because they're so inaccurate (I'll be generating a new accurate average, once I've done a detailed inventory).
The aPack is the freshest, and its entree/item dates are the closest to each other.

With the exception of the EverSafe, all had about the same number of calories.
Some MRE*Star items had no calorie info, so I had to guesstimate (I'll probably use their contact form to ask for those numbers).

Not one menu contained cheese spread - yes, zero!
That was a huge disappointment.
My plan is to inventory (i.e. photograph and record dates & nutrition) one of each menu, sample some of the opened components, use some to rotate some of my car/birdwatching MRE items, then give away some of the complete (unopened) meals to friends/family.

I was disappointed that I didn't get any cheese packets in four cases, since I do eat them semi regularly, and "needed" some for my rotation.

The price of the MRE*Star case dropped after I had ordered all four, and I was impressed enough by it that I ended up buying a second case.

It's not "the best", just the best price to calorie & variety ratio. I genuinely liked the two healthy snacks (note that there is a variety of different fruits & nuts in them), and I already have a decent stash of "real" MRE desserts.

If the EverSafe case was the same price as CTD's cheaper two cases, I would definitely have ordered another case, and added my own spread packs.

I'll be keeping my eye on their site.

When I gift these, I'll be mixing meals from different cases, to give MRE novice folks a better "experience".

I'll bet every regular member of this forum could have come up with a more "balanced" set of menus than any of these cases.

I will post complete menus in the detailed reviews.
The important thing is the spices.
A man can live on packaged food from here til Judgement Day if he's got enough Marjoram.
- Shephard Book, "Serenity" (the pilot), Firefly

If its cheese spread you want/love contact me (via PM) and I'll sell you some.

TurtleNomad wrote:As I've mentioned, CheaperThanDirt is deep discounting all their civilian cases.
Resistance was futile, I ended up buying one of each last month (2012-October), just before I moved. Here's some objective data on them, and my purely subjective opinion.