I've mentioned both Datrex and "Millennium Energy Bars" a few times recently, so here's a quick overview, and comparison against Mainstays.

Kman and CaptBob posted some very helpful comments in a thread about two years ago:
viewtopic.php?f=19&t=2459&p=27936


Overview:
Here's a closeup of the raw opened Mainstay, Millennium, and Datrex (left to right):

That's also the reverse order of my purely subjective preference.

To me, the big advantage of lifeboat rations is that you can toss some in your car, and regardless of whether it's summer in Texas or winter in Alaska, this stuff will still be useable five years later. No other "specialty" emergency ration is that versatile.

The downside is taste. Or lack thereof.

They aren't terrible, but they're not the sort of thing most people would eat with enthusiasm, particularly in large quantities.

Early this year, I experimented with them about once per week over a two month period.
I found I was ok with up to about half my calories per day from them, but my body didn't feel right if I ate more than that. That was probably part psychological, and part genuine nutritional deficiencies (protein in particular).

The worst day, I had planned to do 100% lifeboats, but after 1000 calories worth of Datrex and Millennium bars was feeling very poorly (partly influenced by some prolonged unexpected car & motorcycle noise), and decided to have one modest hot (microwave) meal. Later that evening, I had the strong feeling that I was salt deprived, so I made a packet of powdered soup, then had a banana, for a total of 1415 calories for the day. I may not have been drinking enough water that day.
I need to do some more experiments some time when I don't have to be at my peak, mentally, and can push things more.


Mainstay:
I like lemon, but the Mainstays were cloyingly sweet, and the only one of the three that I did not like. I was able to eat it, in small quantities, but ate less than my planned amount each time I had scheduled it.

Mainstays come in one single brick with light scoring marks. They're definitely "fussier" to deploy than the other two I sampled.

In most taste polls, they come out first, but frequently have voters who strongly dislike them.

I strongly recommend trying a small size, before stocking up.

I have a theory that these may be more popular with children. I welcome experimentation by the forum members!

Millennium:
The Millennium "energy bars" were a pleasant surprise.

First, some pictures...
beside a can of soda for size reference: 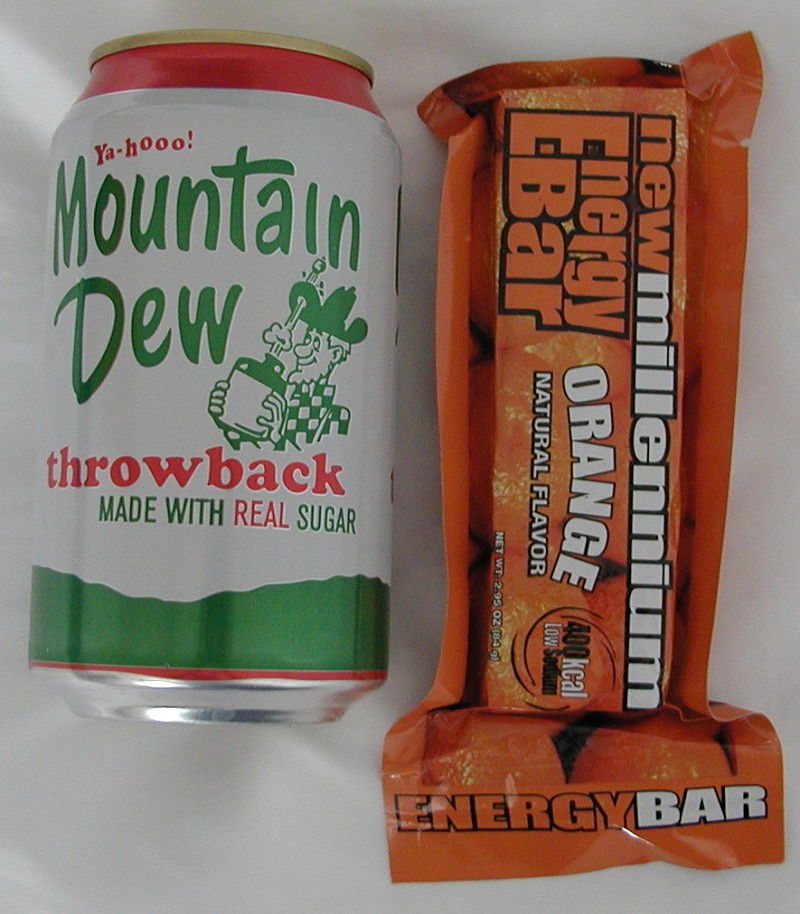 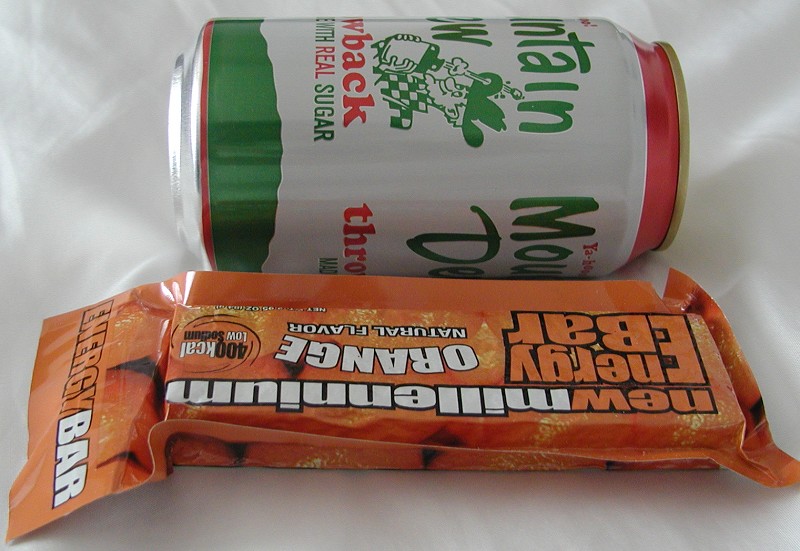 close up of raw bar:

They're the most expensive of the three, but not by a huge amount. The 400 calorie package is the most flexible, and multiple flavors is a nice way to reduce food fatigue, though I found the texture and base taste were more dominant than the mild flavoring. These are the most dense, but they're thinner than the Mainstays, so they're easily manageable. The "notch" makes opening them easy.

One significant downside is that they were the only ones containing trans fat. Not a big issue in a "real" survival situation, but a factor in stocking them for routine field use. I'm still planning to carry at least one in my birdwatching field kit.

Each brick contains individually wrapped 200 calorie portions, which makes these very flexible. The taste is the most bland, but in a good way. There is a slight aftertaste that has been described as "oily" - I don't think that's quite what it is, and it wasn't "bad", just be aware of that. These crumble very easily. When you open them, there is a very strong smell of coconut, but the taste is much milder. If you like coconut, the smell is nice, psychologically (IMO).

Of them all, I was easily able to eat these as a snack, both during my planned days, and on other days. Ever since I bought a 4-pack of 2400s a year ago, I've kept a few loose ones in my car gear, as a cheap & easy emergency snack.


Bottomline:
I think Lifeboat rations are an excellent addition to a layered car emergency kit.

The heat range of these is outstanding, with no real competition. Having some of these all but guarantees you'll have something edible, even if you miss multiple rotations of more heat-fragile food. Particularly for you Southerners, these rock.

They are not as psychologically & nutritionally satisfying as MREs or freeze dried, or other "real" foods, however they're a great way to "strech" limited real food.

They're the most cost efficient of all the specialty car emergency foods (assuming you don't pay a crazy price for them).

Next:
I'll post up some vendor info, and more pictures (particularly of Datrex and Mainstay) including nutrition information.
I'd like to try the other varieties out there, so I welcome frugal vendor info.

Great review and summary, thanks for the effort!

Your one comment made me wonder, How crumbly are these, would it be possible to crumble one in to say and mre entree to boost its nutrition, or even to use as a breading for cooking?
Ration Reviews: USA, Australia, Canada, Japan, Italy, Germany, France, China, Spain, Russia, Lithuania
Wish List: Rations from anywhere I haven't reviewed yet!
https://www.youtube.com/channel/UCnlQPi ... kQXu87uUCA
Top

Your one comment made me wonder, How crumbly are these, would it be possible to crumble one in to say and mre entree to boost its nutrition, or even to use as a breading for cooking?

Good question and it reminds me that I meant to experiment with that more!

The Datrex are the only ones (of the three) that crumble easily.
It's hard to keep them from crumbling.

I will try one with some hot chocolate, soon.

I did try some Mainstay mixed with rehydrated TVP, to try to dilute the strong taste and improve the protein content. It sort of worked, but was still a "sub optimal" eating experience. I took pics at the time, and will post one up, soon.

I don't know about using it as breading. That's well beyond my cooking expertise, but a good idea for somebody to try.

If I'm not mistaken someone here in the forums wrote about these lifeboats rations and the winner was Datrex.

Maybe Olli or one of the administrators can find the thread...

To resurrect the thread .... I can echo just about every word of the op concerning the Datrex. I took some photos today of a Datrex DX1000F ration:

Just slightly larger than two decks of cards. The package cannot be opened by hand UNTIL you discover that they already notched the middle of the top seam. Then it's easy.

The water was pretty good. I would estimate 3-3.5 swallows lol (4oz)

I'm enjoying Millennium bars, started with a few bought at the local prepper fair last year then I went got a couple dozen shipped to me, I've stashed some in my work bag, car-get home bag, CERT response bag, and have one on a hike from time to time - so the transfats doesn't seem like a threat with only that occasional consumption. Normally I'm not a big fan of coconut but in the Millennium bars it works out OK.
Top

Wolfsbane wrote:I'm enjoying Millennium bars, started with a few bought at the local prepper fair last year then I went got a couple dozen shipped to me, I've stashed some in my work bag, car-get home bag, CERT response bag, and have one on a hike from time to time - so the transfats doesn't seem like a threat with only that occasional consumption. Normally I'm not a big fan of coconut but in the Millennium bars it works out OK.

Never tried the Millennium, but can agree with what you said on the Datrex and Mainstays.

Mainstay downside is the fact that they are blocked together. You buy a 3600cal pack, it has 9 connected blocks. Not bad in a survival situation, but kinda sucks when you are using them as supplement on hiking trips, hunting, etc.

SoS foods, the people behind Millennium, also do 2400 and 3600 packs for some of the "survival kits" that is packaged like the Datrex bars. It's a 3600, consisting of the 400cal bars individually wrapped. Will try to get pics later for comparison.

As for crumbling....Try taking a Datrex pack, and crumble it over mixed fruit, or diced peaches while on the trail....instant cobbler..

But, yes, the oil they use does tend to leave a, for lack of better word, film in your mouth when you eat it.
youtube http://www.youtube.com/c/ElandilMRE
Top
Post Reply
8 posts • Page 1 of 1