Hey Everyone, here is a update on the civilian foods line. This one is by WISE Foods out of CENTERVILLE, UT. The Epicenter carries this line of products as an alternative to Moutain House Foods. WISE Foods are often sold in big lots and this one version was a sample you can buy for just a few bucks. I bought this on a trial basis and was really surprised.

The packet is the creamy chicken pasta and was very good. The package says makes 2 jumbo servings but when you empty it out into a bowl and add some hot water it looks like it comes out to 2 normal size portions. I have some photos here of what I did, instead of the package I used a mixing bowl. The taste was very good and creamy and the pasta came out very tender. The vegetables were few and sort of spongy, but okay. The chicken flavour was very pronounced and but not overwhelming. After finishing the meal I though I could have used a bit less water.

Couple of other things I noticed. On the front it says Creamy Chicken Pasta but on the back it says 100% VEGETARIAN. So I'm not sure on this. It also has a zipper on the pouch for easy re-closure. And it mentions to use 16oz. of water (2 cups) to rehydrate but I think you can use less and still get by with a nice pasta meal. Overall, not bad for a few bucks. The only thing that is disappointing is that The Epicenter only carries two trial pouches and the rest of there main meals are in big lots of 6 pouches and up. And they do carry side dishes and desserts but you have to buy those in the lots last time I checked.

End result with 2 hours of soaking

Out of the pouch

Trial pouch from The Epicenter.com

All of the meals from Wise Food Company are 100% vegetarian, they use something called TVP or Textured vegetable protein. I have sampled several of their items and enjoy them for the most part. Their long term storage items claim a 25 year shelf life.
Top

So does this mean that people on restricted diets can eat this? Also does this fulfill what the USDA recommends for a daily allowance? I would think that as far as backpacking, hiking, or any other sort of outdoor exercise that this would be something to fill the void but be short of nutritional intake.
Top

That is a really good question Treesuit ill have to look further into that myself. and as far as the restricted diets go i would guess that depends on the type of restrictions. I may have to give the company a call and see what they have to say as to the USDA daily recommendation and how their product holds up to it.
Top

If the meal was a Texture Vegetable Protein then I figure the meal could be consumed by anyone. Unless your on a restricted carb diet or vegetable protein reacts with you. Other than that shouldn't be a problem.
Top

Hello again everyone here is another review that I think everyone might be interested in as far as food storage, or alternatives to MRE's. I picked up this item as a whim as I did a short backpacking trip in central WA state last month.

I picked up a new thing by POWERBAR: it's called POWERPLUS BITES, it's a new twist on Powerbars in that the bar itself is cut up and made into small chewy balls that are covered with chocolate and nuts. I tried the chocolate peanut butter version and was so surpised by this. The powerbites are very soft and chewy and has a great balance of chocolate and peanut butter. It has 20 g of protein and is 300 calories for all 8 bites. And since it's protein balanced is sustains hunger if actively working. I had these as a snack and during my hike I just had about half and was satisfied until lunch. It's great becuase the bag had a zip closure.

Powerbar sells this at an angle of "helping promote lean muscle while active". Okay, if you are actively engaged in physical work then this is great until you can have a better meal. It also has a combination of Whey protein, Soy Protein and Casein. Not sure about the Casein but I recognize the others. Those are ingredients that body builders use in weightlifting.

The only downside is if you are allergic to nuts or nut products then this isn't for you. Powerbar does make another flavour, which I can't remember, but that is nut free. Also you do need a little bit of water with these. You can a little thirsty.

Hey everyone I have another great installment of the long term civilian foods line. This weekend I tried the Mountain House Breakfast Skillet Filling. This is another great entree I bought on sale at the local REI store and looked very good.

The entree is almost like the Cold Weather Ration "western style scrambled eggs" which has been previewed and taste tasted here on the forum. This entree comes with eggs, sausage, hashbrowns, peppers, onions, etc. The first thing you notice when you open the pouch is the consistency of the freeze dried food. Exactly like the cold weather rations. The difference is when you add hot water and let it sit after a 8-9 minute wait it's ready to eat. I've had two RCW's in my time so when compared to this, Mountain House took less time.

After reconstituing, I packed this into a Tupperware container for a long kayak trip. After 5 hours it still looked and smelled wonderful. I brought along some cheap flour tortillas and they too held up in my dry sack. During my lunch stop the texture of the entree was great, the eggs were not chalky or green, the hasbrowns were flavourful but a little mushy, and there was a strong taste of onions but no peppers. I also had enough to make up three wraps and fell quite full. That's good because I still had another couple of meters to go of kayaking before our group was done.

All in all, great entree IMHO. Also this one was priced right and fills you up quickly. For those of you who do like western style breakfast entree's this would be good one to have. That and maybe some hot sauce or salsa to perk up the taste.

After 6 hours in a plastic container

With some cheap flour tortillas

Since Tree had done his with hot water, I decided to try cold water. Originally I was going to try it after the minimum wait time, but inadvertently left it a full half hour or so. 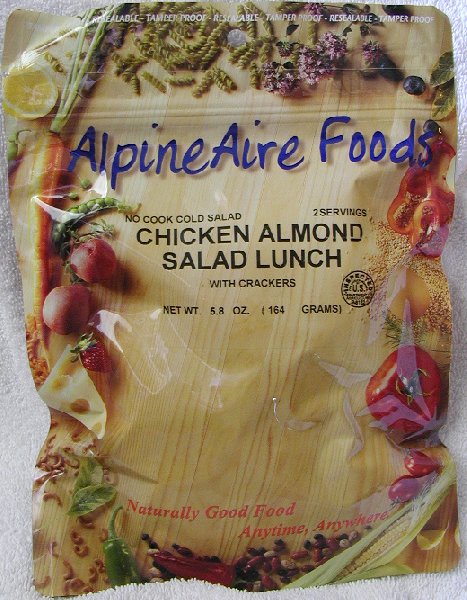 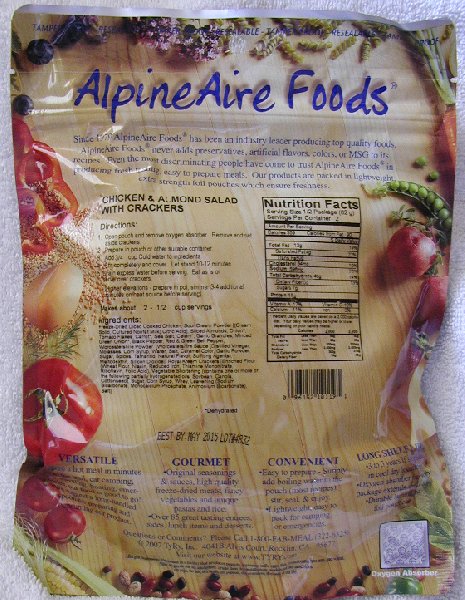 Inside... hey, the crackers are in a separate mylar(?) pouch!: 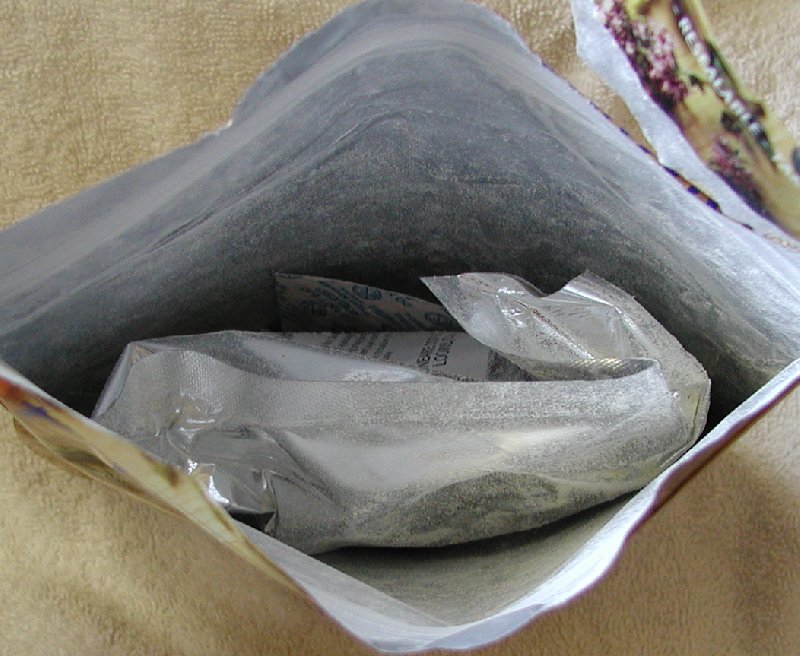 Let's check them out: 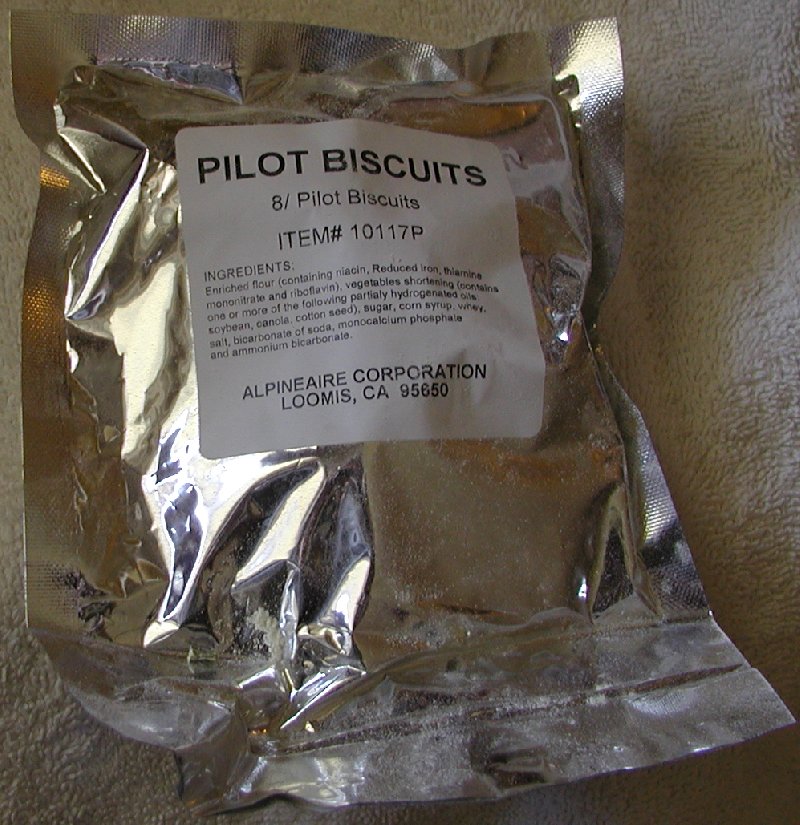 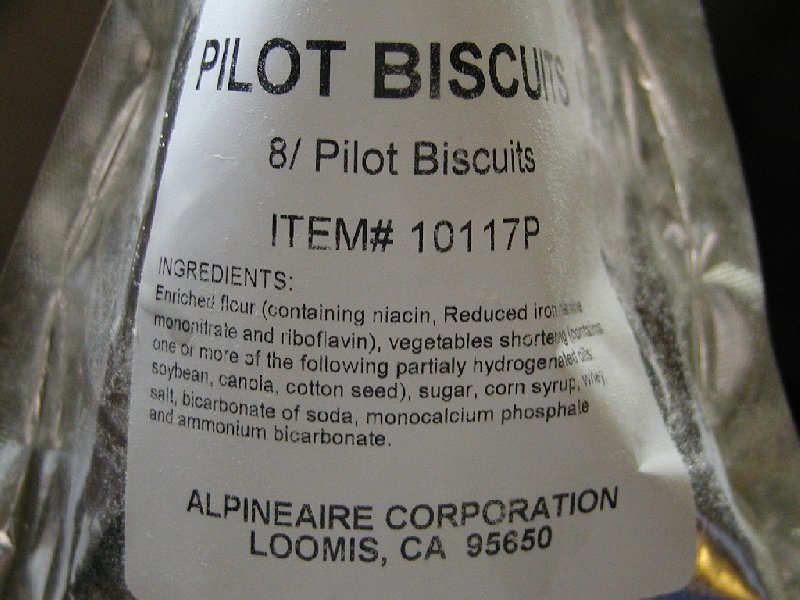 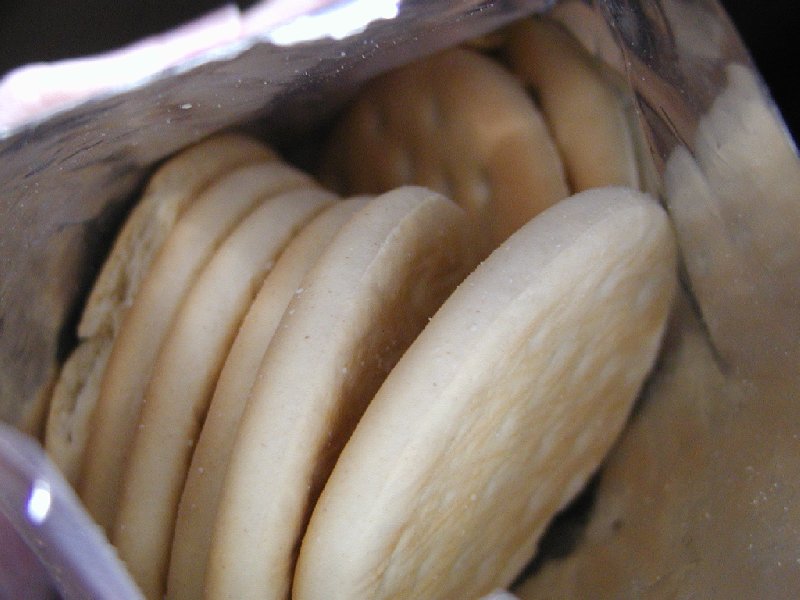 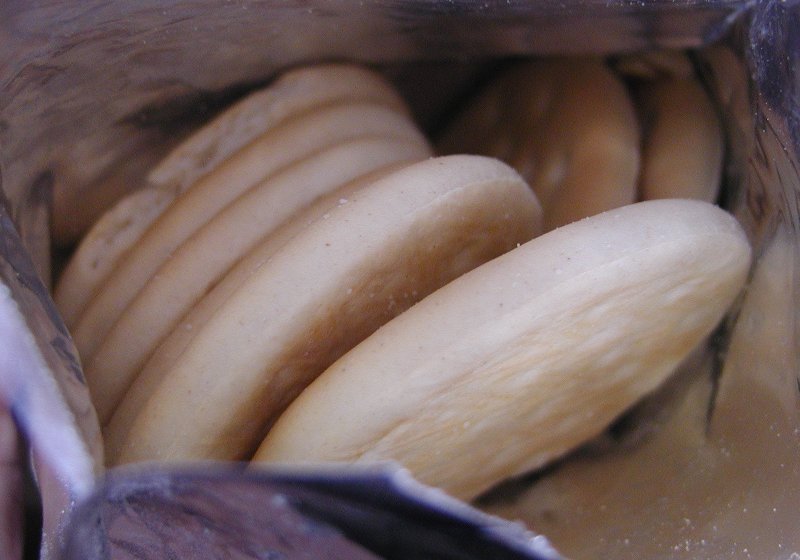 They look tasty, but let's get back to the freeze dried stuff: 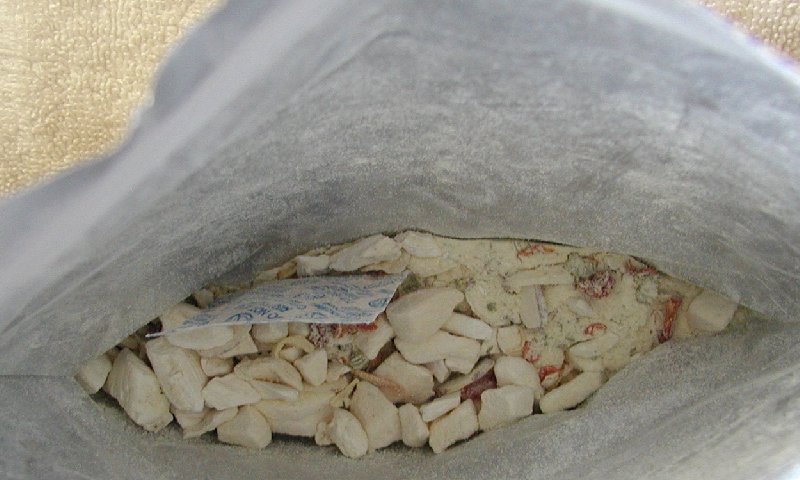 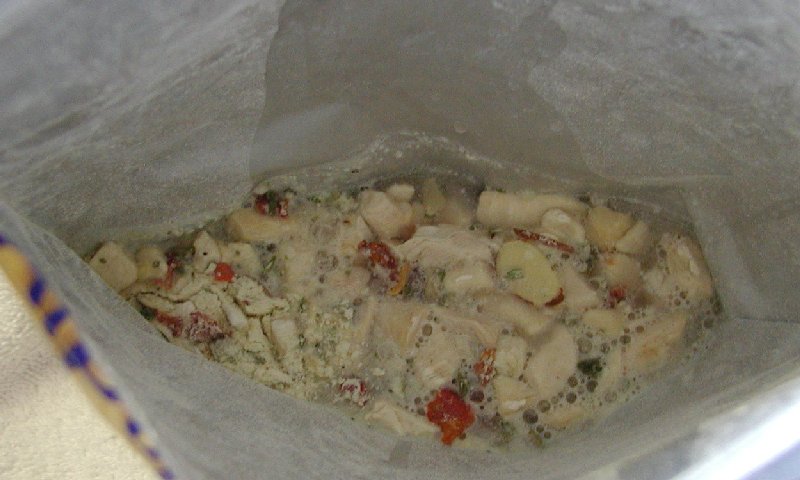 About a minute after stirring: 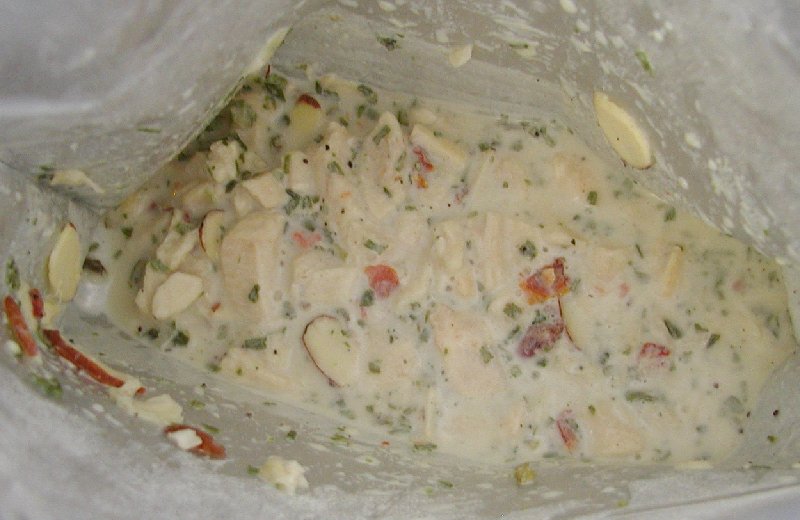 After about half an hour, chicken has plumped up quite nicely: 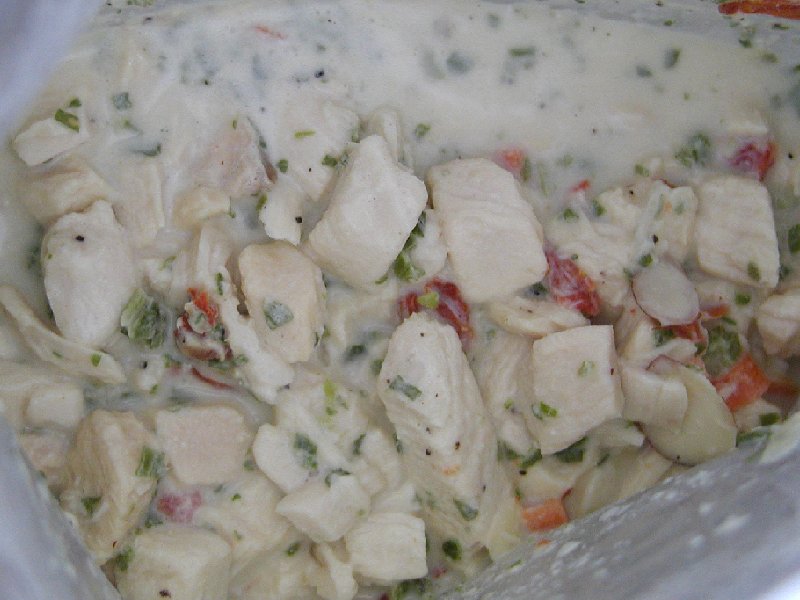 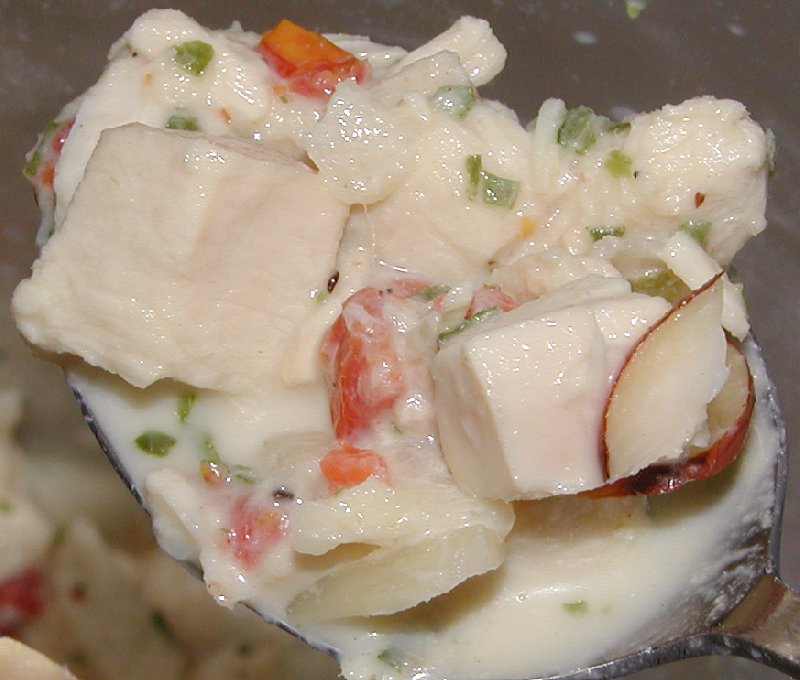 Leftovers, after about 3 or 4 days in a fridge: 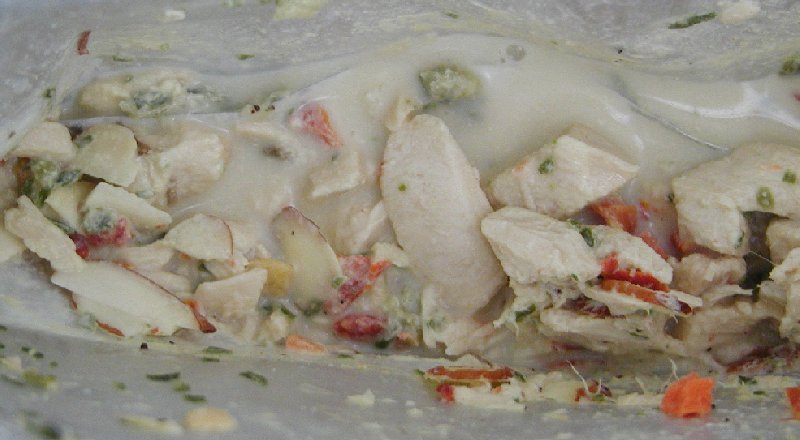 It tasted as good as it looks!
The almonds were subtle, as were the other bits of veggies/etc.

The primary taste was of chicken.
I felt the chunks had better taste and texture than the typical canned chicken chunks.

I'd previously had AA pilot crackers as part of their "Peanut Butter & Cracker Lunch" pouch (where they were loose in the pouch, with two MRE-sized squeeze pouches of PB), and very much liked them.
They're a very plain, rather thick cracker, perfect for spreading stuff on.

A few weeks later, I bought one of the MH Chicken Salad, and also rehydrated it with room temperature water, as an experiment.
That time, based on Tree's experience, I waited about 5-10 minutes after the minimum sit time, and it had rehydrated adequately. I refrigereated the rest, and ate it over a four day period, in about four one-to-two-tortilla-sized-servings. It was excellent value. I was just doing computer work during this period, not heavy activity.

I agree with Treesuit, that the MH "salad" is kind of an odd mush, but thanks to his review I had greatly "diminished expectations" so I genuinely enjoyed it.

As he posted, the pumpkin seeds are very bland, but do add a pleasant texture to the experience.


I've got one extra of each, and will probably carry and eat both over the next few years, during Fall Migration birdwatching.
I plan to carry tortillas/wraps, and save the AA's separate pilot crackers for use with MRE cheese or PB, so I can have multiple meals with minimal effort/tools.

There's a huge advantage to these no-hot-water dishes!
If anyone finds other ones, please share.
Even if they aren't "officially" cool water ready, but you tried it that way, I'd like to hear your results. I had been planning to try a semi-random pouch with unheated water, but until Treesuit's review, had not realized some FD was intended for non-hot-water rehydration.

P.S. Sorry it took me so long to post this!
I'll try to post up some more freeze dried pouch reviews over the Holidays.

A big thanks to Treesuit for starting this thread!
The important thing is the spices.
A man can live on packaged food from here til Judgement Day if he's got enough Marjoram.
- Shephard Book, "Serenity" (the pilot), Firefly