Collection of ACCESSORY PACKETS from different US Rations

Simon, thanks a lot for your intensive research, now we know were that fine Accessory Packet can belongs

As you mentioned it is very rare, I searched for it in ebay the last years, here it was two or three times were I saved some pics from a opened can an its contents (all photos source: eBay): 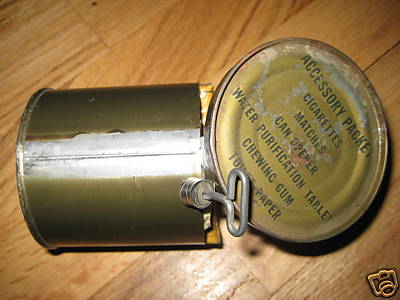 The ebay seller were I got the can wrote in his article description that his father brought home the Accessory Packet from Korea. X has come full circle

Its a little can of pure gold. A real time capsule

Thanks for sharing it and the other pictures my friend!

to bad i didnt save the pictures.....

cheers ken, i realy admire your collection my friend

norge wrote:a few weeks ago there was a big lot of those cans for sale on eaby.
they went for many 100$$$ i was bidding up to 175$ then my wife said no

to bad i didnt save the pictures.....

cheers ken, i realy admire your collection my friend

They not always got a sense of history

Hi,
those “Ricains” are not dumb: the accessory packet can contains the can opener BUT it's got its own key to open it. I guess in the French Army you would be supposed to open the can using the P38 that's inside

Wow! Those are some rare finds. Even the tan-olive color is very different than anything we've seen here. Can you tell us if that particular color was in production for only a short time or did it run from say 1958 to 1963. You mention those two dates so I'm guessing those area short period to go on. All I've ever seen was the dark brown color and some other early variants from pre 1958.

. But I also think that that tan-olive color is rare.

It is a true find for the A-pack in a can. And in such mint condition! I'm sure most of us here are jealous and what you have. I guess my assumption of it being a bigger individual ration was right but I can't believe the Army made a heavier/bulkier MCI for a short while.

I venture another guess as to why it was developed for Korea, in that being in moutainous terrain especially during the winter more calories might have been needed for a solider/Marine to live on and continue to fight. More meals=more calories even with a fighting load and pack. It makes more sense to me, since you will burn more energy in winter than say summer.
Top

Hagen here is the C3 ration in Korea.

All of these rations received their C 3, 4 etc designation before the Korean war. Certainly before 1949. 1948 seems to have been a very big year for deciding ration designations, stopping rations like the 10 in 1 and E ration, while the amazing K ration was declared "obsolete" also. Any changes in composition were just given a higher number. C 3 through to C7 were all being used concurrently in Korea!

1 12oz tin of fruit.
C 4 had a foil accessory packet, and 2 6oz tins of fruit. And a spoon! C3 had no bloody spoon! Can you believe that?
C 5 had 1 8oz can of fruit. Foil a/p, spoon.
C 6 changed the fruit composition again with 2 4oz fruit. foil a/p, spoon.
M and B units throughout seem to have been essentially unchanged. There was a change to the "recipe" of chicken stew between C4 and 5 which greatly increased acceptance of that product. Col Dobson of the QM branch mentions this in his 1951 report from the Korean theatre, and the great (and unexpected) unpopularity of the 5 in 1, due to the overprocessed texture of the meat items, and the impossibility of lightly equipped men preparing it, without limited cooking facilities.

Theres an obsession with tinned fruit here.. Col Dobson of the QM branch reported in 1951 that fist fights were breaking out in squads due to the uneven allocation of fruit with the C3, so this must have been an attempt to rectify this potentially serious morale issue.

Treesuit, the winter supplimental allocation of rations in the Korean winter was issued at the B ration level. There was no winter or cold weather C/RCI ration as such on issue, and none of the RCI/C series was specifically designed for Korea it seems.
Extra rations of high carb stuff like bread, cereals, instant mash etc were allocated to the cookhouses, giving an extra 500 -600 cals a day to the troops.
Top

Some new kind of Accessory Packet

biscuits brown wrote:Hagen here is the C3 ration in Korea.

Simon, thank you for your research and the interesting information


Meanwhile I have another Accessory Packet packed for VAN BRODE MILLING CO., INC. in transparent plastic pouch in my collection

, but I have no idea how old it is and to which ration it belongs. Because of the appearance of the Coffee Packet it have to be older than 40 years I guess, it is packed by TENCO, A DIVISION OF THE COCA-COLA COMPANY.

As I can identify there are many civilian items in it, some are additionaly packed in plastic foil and it seems the the Coffee packet is leaking

Here are some pictures: 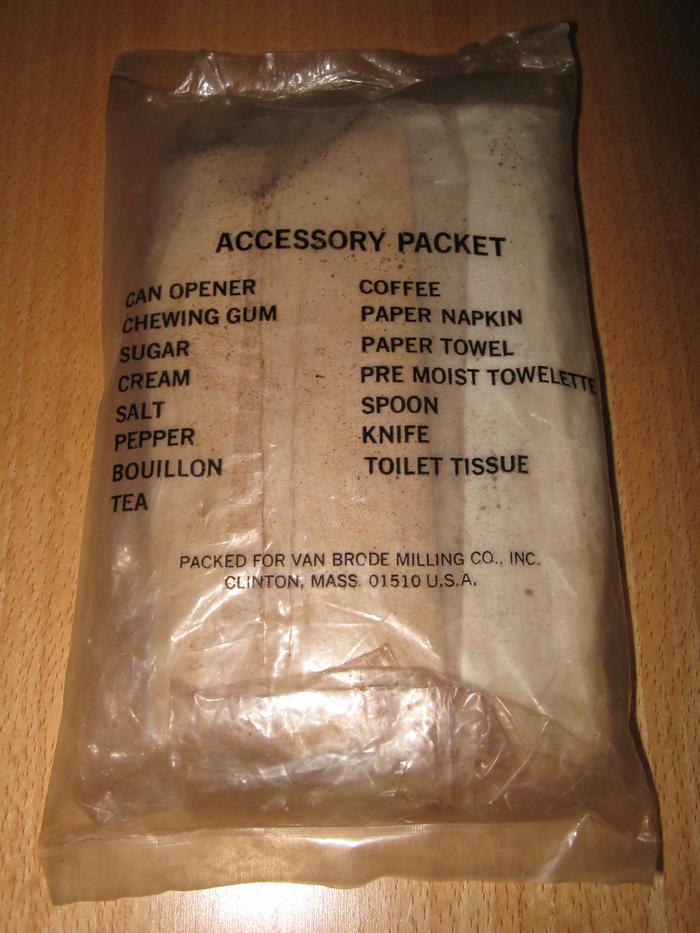 The contents best match up to the Individual, Trail, Frigid accessory pack, but the contents point to an earlier (1960s) specification, beef stock, tea and coffee. However it must be post 1975.
No cigarettes.
The towlette packaging looks really 70s, maybe even 80s.

Return to “Other US Ration Reviews”