Continuing to "eat through" my 2006 Case B of MREs. Today I sampled Menu 21 Chili and Macaroni 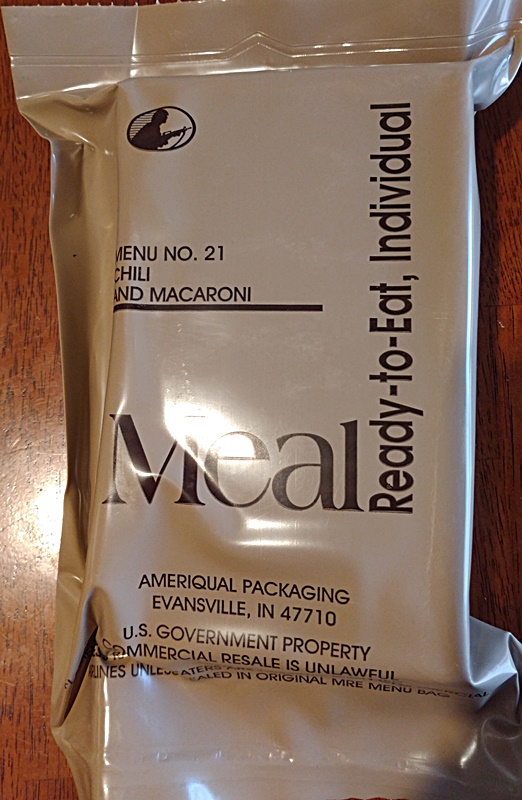 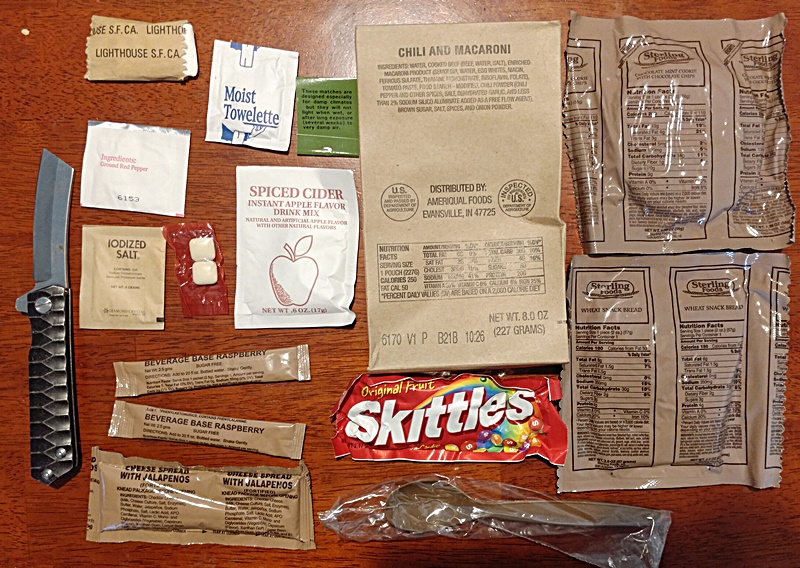 After putting the Main into boiling water to heat (saving the FRH), I made up one Beverage Base Raspberry SUGAR FREE. The packet says to use 20 ozs. bottled water. I didn't have one of those, so I mixed it with just 16 oz. in a measuring cup. It took a bit of stirring to get it all dissolved...some floating white islands were particularly annoying. But it did mix in even using cold water. Even with using 16 instead of 20 oz. of water, it tasted pretty good and not too sweet or too much like "sugar free". It was nice with the Chili.

Once hot, I plated the Chili with Macaroni, the bread and the Jalaeno Cheese spread. 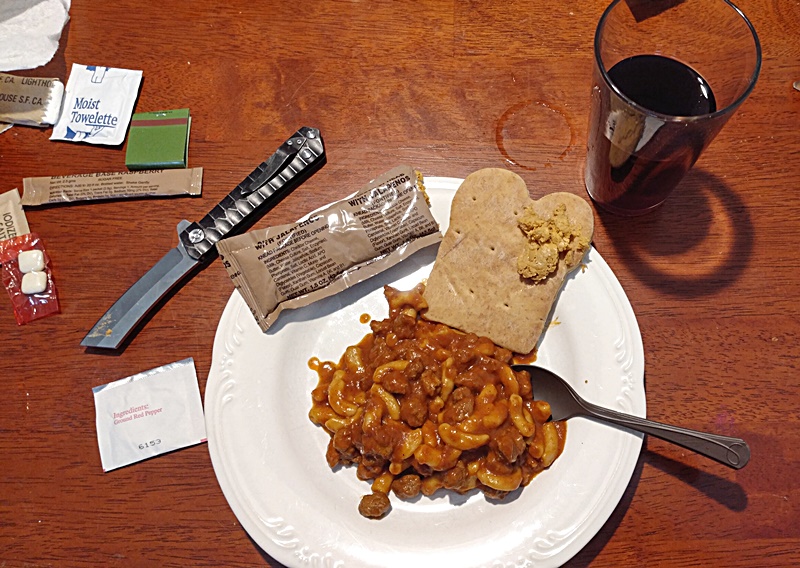 Even with kneading, the Cheese Spread was pretty grainy and a little brown. Not smooth. It tasted OK with some spice, but not too hot. HOWEVER, about 30 minutes later, it wasn't sitting well in my stomache. Just a bit of heartburn and "re-taste." This happened with the "Cheese Spread with Bacon" last time I had one of the 2006 meals, so I don't think I'll be eating the cheese any more. Just doesn't agree with me.

The Chili and Macaroni was nice and tasty! A little bit of spice, but not really hot. I did not feel the need to add any of the Ground Red Pepper. It tasted a lot like regular canned Chili (no beans) and regular macaroni. It didn't really seem cheesy like it does when I mixed canned chili with Kraft M&C, so I think this was NOT "Mac and Cheese" macaroni. I at it all and sopped up some of the sauce with Wheat Snack Bread.

The Snack Bread held no surprises. Dense, dry and fairly flavorless, as usual. But nothing wrong with it either.

After going back to work, I at the cookie. 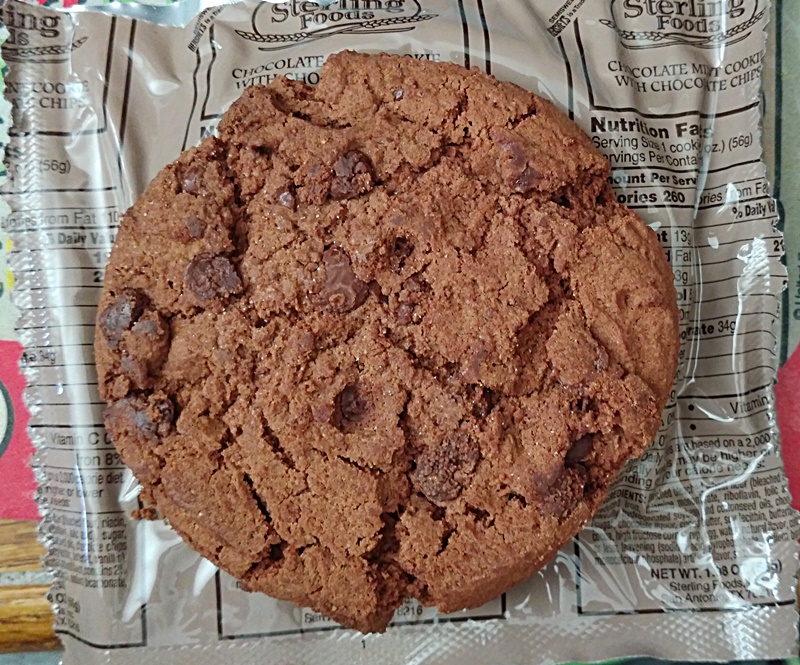 The cookie was try and pretty crumbly. The photo doesn't show how dark brown it looked in person. It clearly had a chocolate-based cookie with mint flavor and then regular chocolate chips. I liked it and would certainly eat it again.

That's all I ate today. I'll likely share the Skittles with my daughter later tonight. The second Beverage Base and the Spiced Cider will be set aside for later consumption. I expect the second pack of Bev Base to be just like the first. I have had the Cider before, too, and it was OK if you are a hot cider fan (not my favorite, but I don't hate it).

The sharp-eyed viewer will see that I didn't use a US MRE spoon. I'm not sure where this spoon came from, actually. I thought it was from a previous ration, but it isn't Canadian or British, so...dunno.

Also the knife... I liked the razor-shaped blade that Nathan uses so I picked this one up at a local gun show. It is made my a local knife make and actually has more of a "Tanto" shape to it. Bronze handle scales, liner lock. It's a pretty nice knife.

Please comment if you like these quick photo/text reviews so I'll be encouraged to keep them coming. Thanks for your interest.

Daughter and I ate the Skittles tonight. They are, or were, older than she is! Just a little bit harder than normal, but still great!

Those small drink sachets are pretty much Crystal Light, and I must say that they taste better than almost every regular beverage base powder.
In the immortal words of President Harrison Ford, Air Force One: Peace is not the absence of war... it is the presence of justice.
Top

Even with kneading, the Cheese Spread was pretty grainy and a little brown. Not smooth. It tasted OK with some spice, but not too hot. HOWEVER, about 30 minutes later, it wasn't sitting well in my stomache. Just a bit of heartburn and "re-taste."