Terse:
Excellent entree - my new favorite of them all!

Verbose:
Pic of all the bits and pieces (kind of jumbled up - was just taking a quick shot of how things layered in the package, not doing a 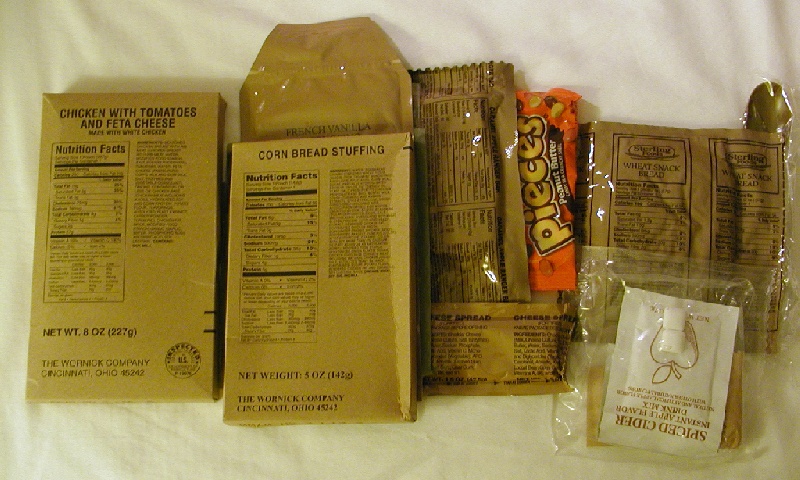 I only ate the entree, side, "Candy II" (Reese's Pieces), and cider.
The Ranger bar went into my car snack box, and the rest went into my components box.

I prepared the entree and side using a kettle and pyrex bowl, so both were uniformly piping hot (have never achieved that with a FRH - could be operator error).

I'd only had the cider once before, hot, and had been disappointed by it, so I decided to try it un-heated. Drank some while waiting for the main meal to heat, and enjoyed it. That's purely subjective, but figured I'd encourage others who were disappointed with it hot to try it cold. It's less sweet, and just seems "righter" (to me).

It also went very well with this particular menu.

I'd had the "Cornbread stuffing" side before, so only had a brief moment of horror at how unappetizing ("glop") it looks: 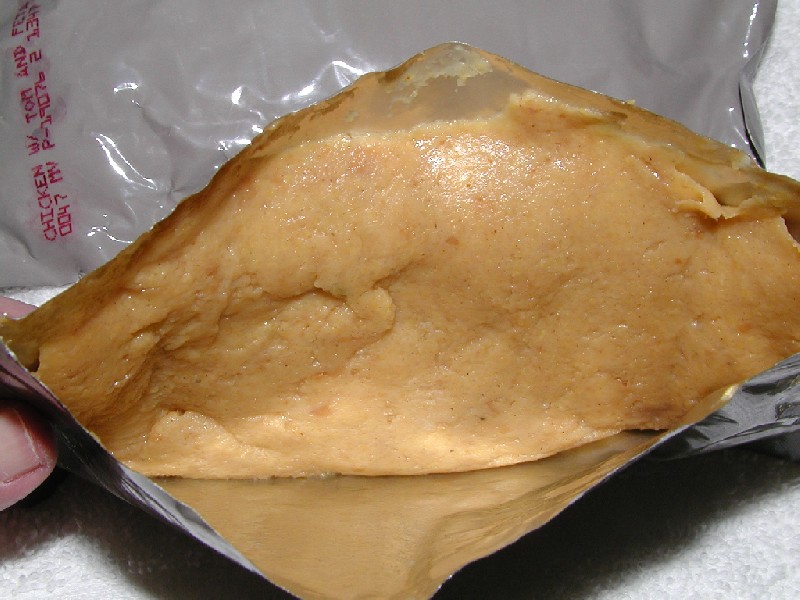 As others have attested, it tastes way better than it looks.

Though I suspect part of the favorable reviews is the pleasant surprise at the complete lack of nastiness after the initial visual "glop" impression.

When I opened the "Chicken with Tomatoes and Feta Cheese" entree (in the manner taught to us all by Kman), I was surprised to find a slab of meat: 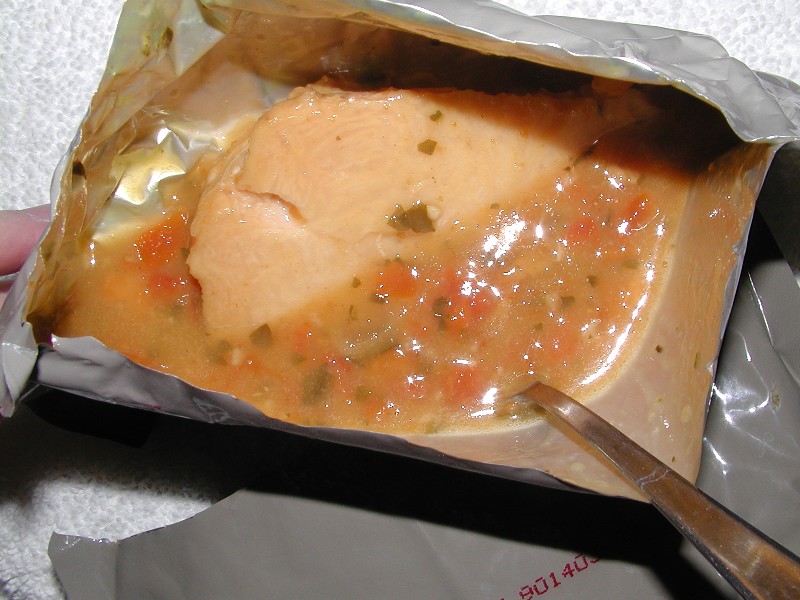 I had assumed it would be some sort of stew like thing (in retrospect, this makes sense, since it replaced the #5 Chicken Breast meal). 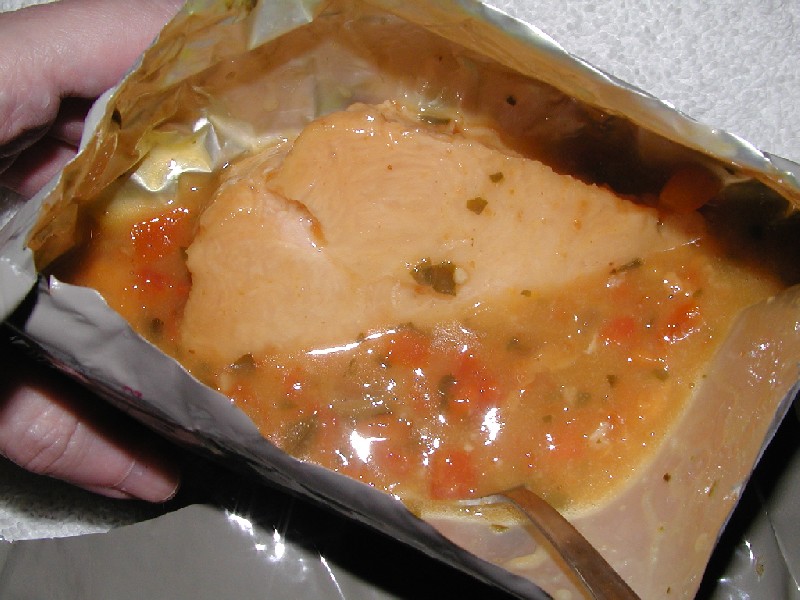 A closeup, after some cutting, mainly to show that it really is a genuine slab o' meat: 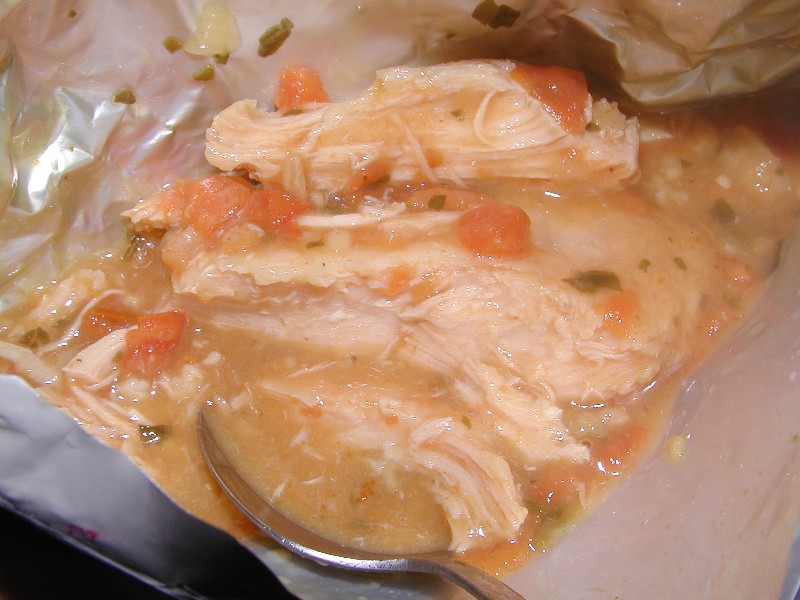 The aroma was excellent, and the taste was a very pleasant surprise!
It wasn't heavy, or overwhelming, but tasted like "real" food (whatever that is), instead of canned. There wasn't the acidic/canny aftertaste that's common with MREs.

The tomatoes and chicken predominate, and the sauce gently complements them. The tomatoes were perfect - plump and tasted fresh (note that I'm not a huge tomato person, nor any sort of :cring: foodie).

I did not notice any feta taste. The sauce was a wee bit creamy, but not strongly so. It's hard to describe - it just tasted "perfect".

Whenever friends ask me about MREs, I always recommend they try a couple of Chef Boyardee or equivalent canned ready-to-eat food, and if they don't like those, don't bother with MREs.
This is the first entree which violates that rule-of-thumb!

(sneak-preview: Ratatouille is the 2nd entree (IME), and my new 2nd most fav entree.)

Quality-wise, it was roughly equivalent to something you'd get at Olive Garden. It's not "high end", but it's definitely "classier" than the usual MRE fare, without being (Jayne Cobb voice) "pretentious".

The one thing I didn't feel was a good choice was combining it with the cornbread stuffing side. They weren't "bad" together, but the stuffing was a bit too strong of a taste, and somewhat diluted the excellence of the entree. I'm planning to have another entree, in about 5 days, and will probably try it with either instant or MRE mashed potato (or maybe just some good but plain bread).

If anyone tries the entree before then, please do experiment and share your results!

Or just share your suggestions - I've mostly eaten entrees, not sides, and tend to be weak at picking stuff that goes together.

Recently I ordered a box of goodies from TheEpicenter, and included several of this entree, mainly to be used as a morale food in my car's emergency bags, and also to do more Quality Control.

Some of you may have been avoiding this, because of feta-phobia.
Fear not da feta - this rocks!
- Kate
The important thing is the spices.
A man can live on packaged food from here til Judgement Day if he's got enough Marjoram.
- Shephard Book, "Serenity" (the pilot), Firefly

Great pics and review. Haven't tried that one yet.
Top

It sure looks a lot more appetizing then my chicken breast menu (2009)..
My chickenbreast lacked any form of meat structure (fiberlike REAL meat structure) and tasted very chemical.. there also wasn't any feta/tomato sauce to hide it. I think the sauce is a very good way to hide any chemical tastes caused by conservatives or vitamin/mineral additives.
Sure, someone may one day kill me with my own gun.
But they'll have to beat me to death with it because it's empty.

Just had one of these, and like you I thought it pretty darn tasty.

The meat in mine looked like shredded chicken, but there was a lot of it, and it was pretty clearly real chicken - not something that was chopped/minced/ground and formed. Tasty sauce. No chunks of feta cheese, but I thought I caught a "twang" of feta cheese in the flavors.

I was very surprised both at the amount of honest-to-goodness real chicken and the fact that it was really tasty.

The Mexican Rice was merely OK. Clearly was rice, but the taste and texture were just a little off. Not bad, but not as good as the Mexican Corn or the Chicken with Tomatoes & Feta Cheese. I've had the fried rice too. I think the Mexican Rice is better.
Top

Ancient 2011 post, but anyone know when this menu was phased out. Just bought one, wornick packed, and it has no exterior date code.
Thanks
"Little ducks, there's trouble in Russia, so they called us"
Video Reviews:
https://www.youtube.com/channel/UCfB4TN ... bNi1TwQF5w
Top

They were last made in 2014. Absolutely delicious entrée!!! Possibly my favorite.
Top

2014?? Oh man, i dont have the iron stomach of Steve, Sticky, GunDog, Gusto, etc, but it should still be ok. But i dont know if it was stored well.
"Little ducks, there's trouble in Russia, so they called us"
Video Reviews:
https://www.youtube.com/channel/UCfB4TN ... bNi1TwQF5w
Top

It looks like the components changed slighlty over the years, so i should be able to narrow down the date once i open. Should be some codes inside too, i would think.
Lots of prior talk on this one and it seems this is a love it or hate it menu
"Little ducks, there's trouble in Russia, so they called us"
Video Reviews:
https://www.youtube.com/channel/UCfB4TN ... bNi1TwQF5w
Top