I was able to acquire a 1988 Menu No.12 which makes it, by far, the oldest one I've ever found here in Germany personally.
It was procured from a nice lady living in Berlin who put up an offer on what is essentially Craigslist.
She put it up with a blurry picture, couldn't even tell the menu, but I knew it was an older one, judging by dark brown color.
She claimed it was from the mid 90s "probably" and she kept it in her kitchen drawer and she had no clue where she got it from
Maybe from some soldier stationed in West Berlin? Who knows.

It arrived and to my amazement, it was much older than anticipated. A quick date code check and double check with a menu list on here, I can firm confirmation that indeed I got an 1988 Menu 12 for 10€ 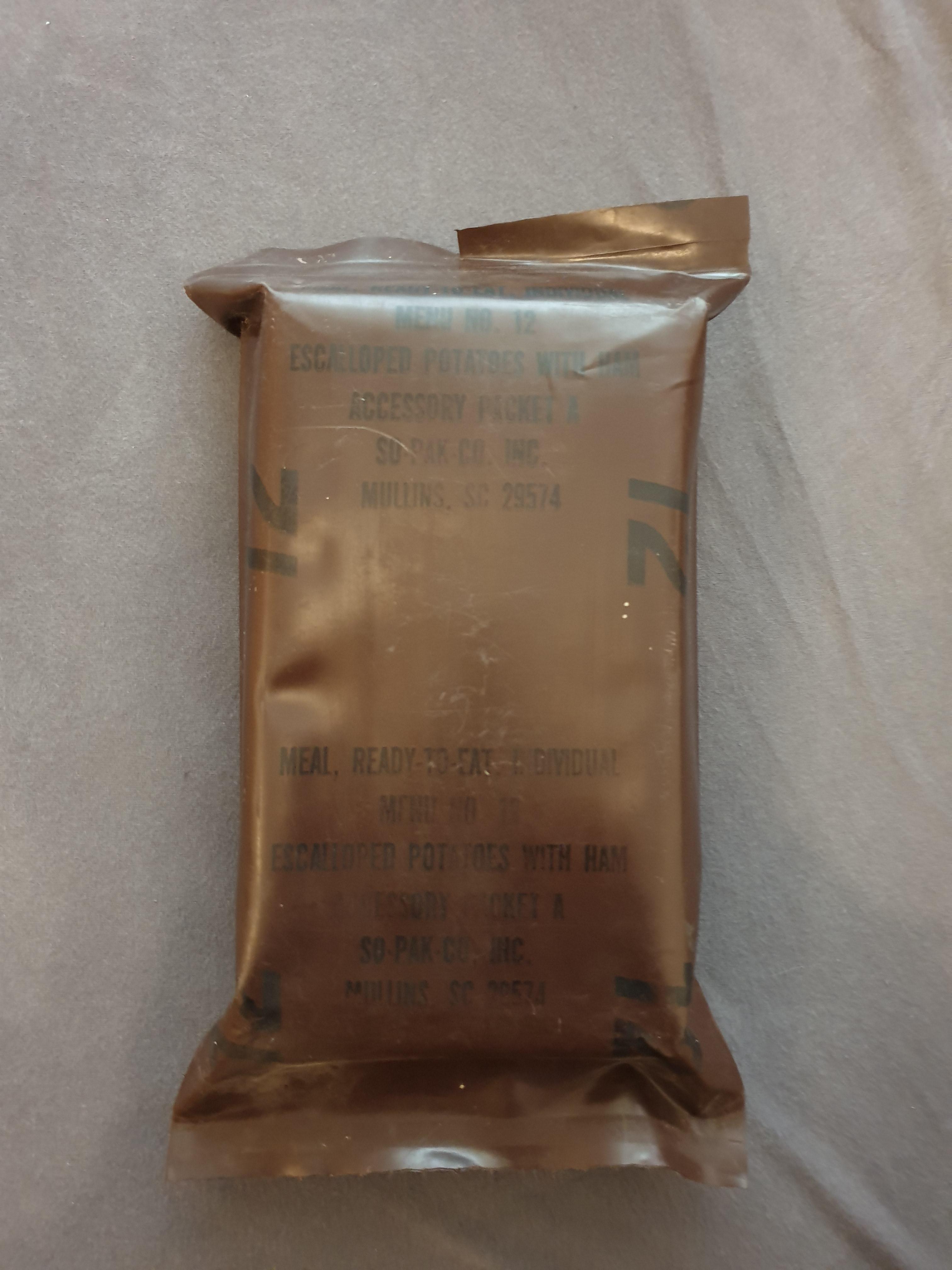 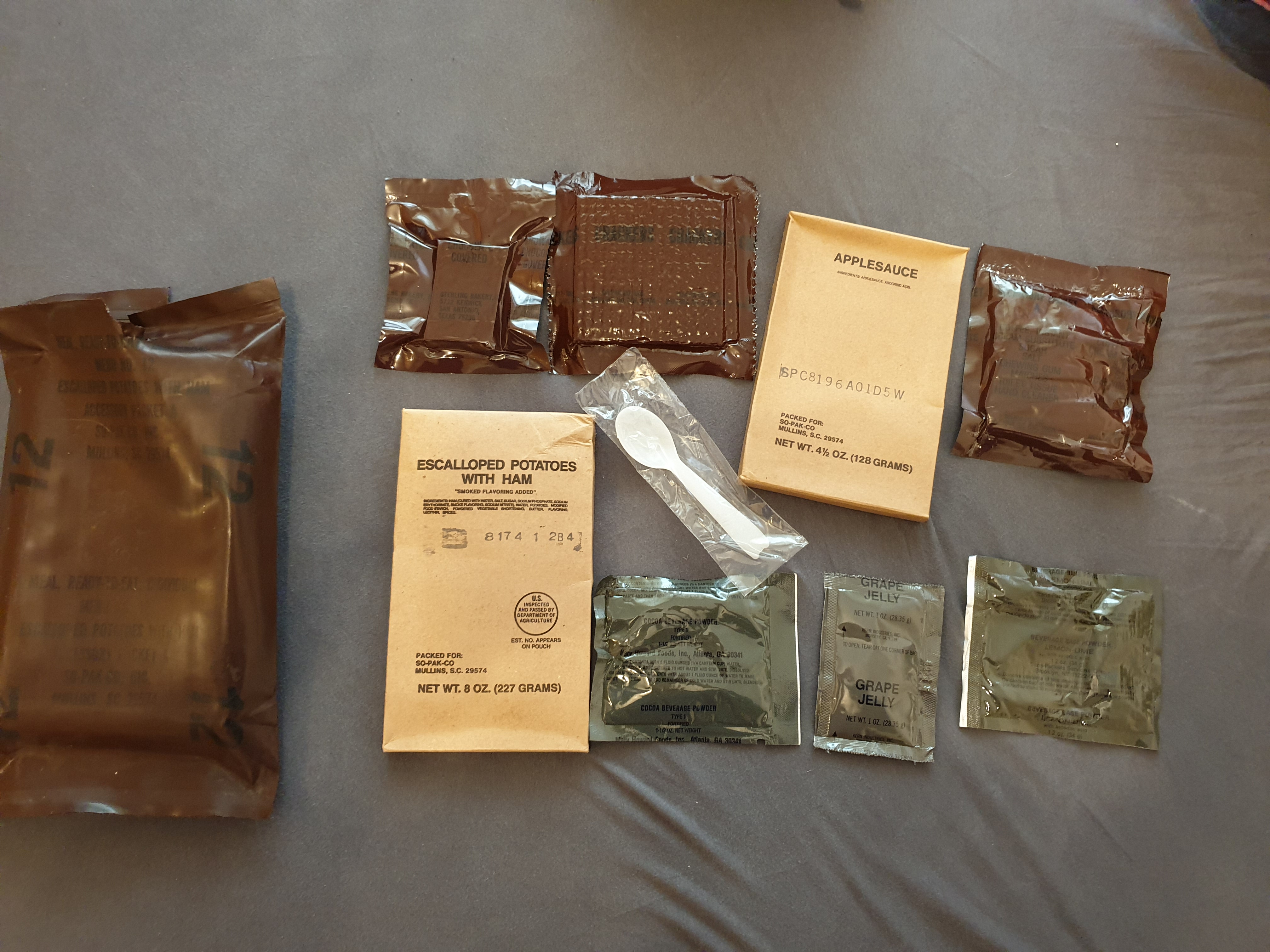 to my further amazement, it came with the older type MRE spoon, which I personally never saw and with the revered Instant Coffee Type 1.

Didn't smell like anything really in the bag and all the vacuum seals were fine, the beverage base was still in its powder form which put me in high hopes.

I started off with the mains, which I boiled in the pouch and I prepared the coffee and the cocoa beverage. I skipped on the creamer, as I heard these go bad. It slipped my mind, that the cocoa beverage base also contains the dehydrated milk, which would later bite me in the butt.

the Escalloped Potatoes and Ham looked good and smelled only a little...sour? Not rancid or anything that made me worry too much. 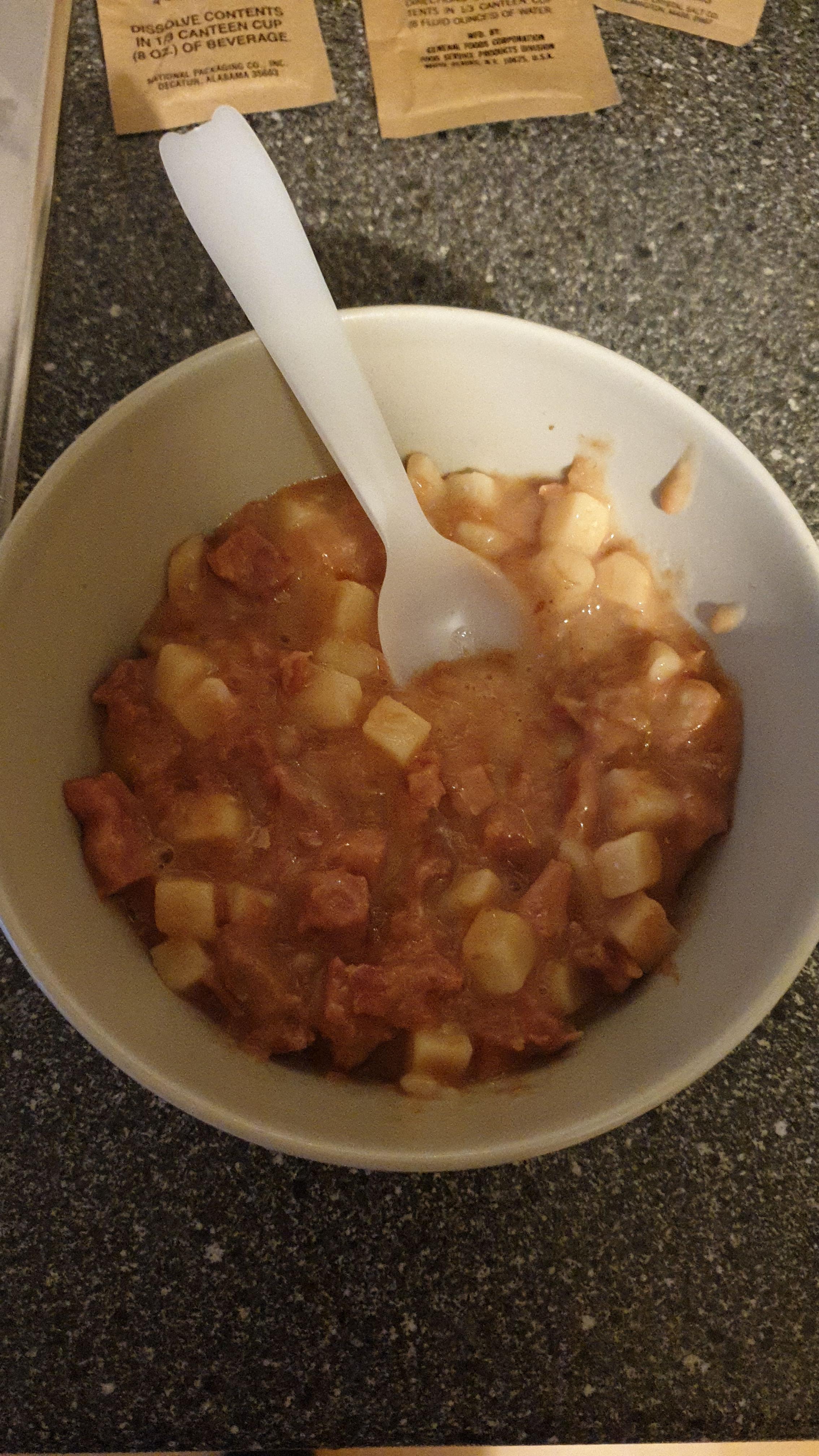 The Coffee smelled and looked perfect and the cocoa beverage smelled and looked like cocoa beverage base usually smells and looks like nowadays.
I sat down and made the mistake of reflecting that I'm about to eat something made when Reagan was still president and furthermore, that's 6 years older than I am.
I took a reluctant bite and the first taste was normal. It tasted like ham and potatoes in gravy. The potatoes were about the consistency as you'd expect from a canned meal, which is surprising after 31 years.
the meat still had the consistency of meat and the gravy just looked a little bit concerning.
The aftertaste was sort of foul and just "off", but not "off" enough to trigger a gagging reflex. I decided to keep on eating and finished the mains.
Thinking I got the worst behind me, I took a sip of the coffee, which was as good as people said it is, fueled by that moment of bliss, I took a big sip of the cocoa beverage.

Bad move.
That was foul and not edible at all. I had to wash my mouth out to get the taste out.
I was under the impression that the chocolate covered brownie would be the highlight of this ration and would be good.
Wrong again. 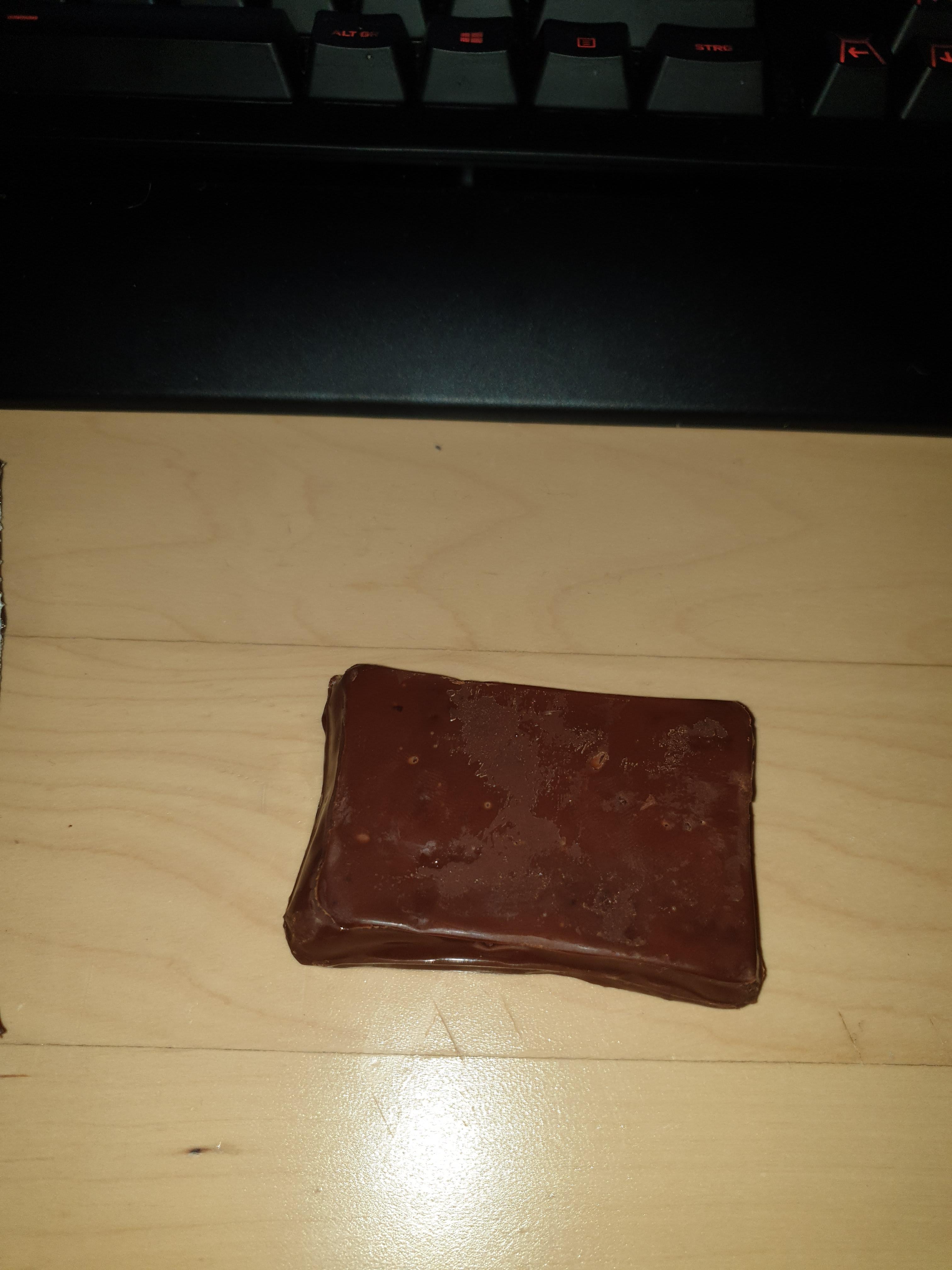 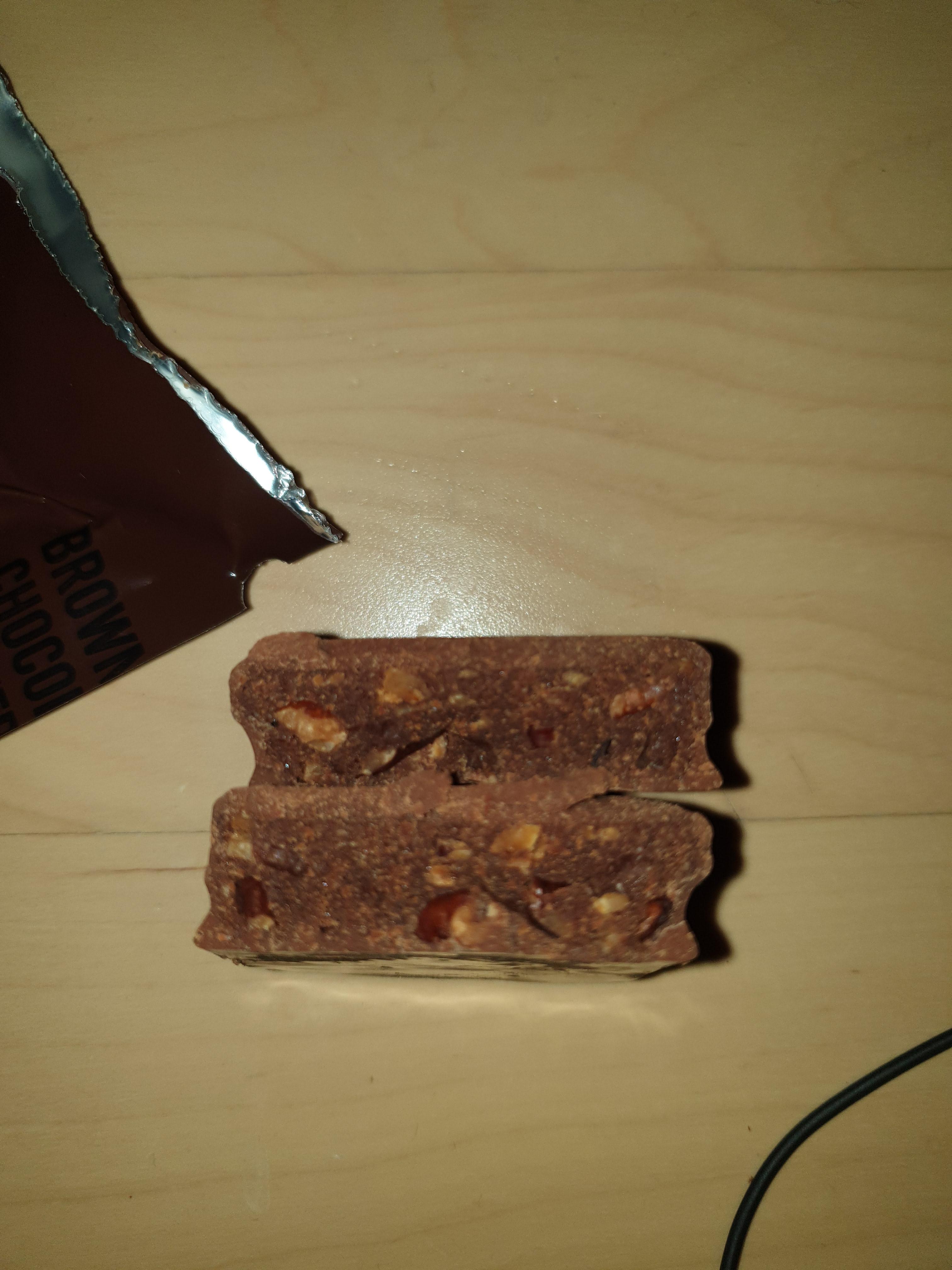 it felt wrong, it smelled wrong and I still took a overconfident bite.
it tasted awful and it coated my mouth it that horrible taste and that horrible, horrible wax. It tasted like cosmoline smells.

I was really bad.

I took a quick break to scrub out my mouth and carried on to the grape jelly and the crackers.

I haven't opened the Apple Sauce and haven't tried the Beverage Base Lemon Lime.
The grape jelly was bad and I think the Apple Sauce will be the same.
The beverage base should be fine, but I'm saving that one.

Overall, this was quite the experience and this is being typed out the morning after with no abnormalities to report as far as digestion goes. So the mains were probably fine, apart from the funky taste.

Thanks for writing this!

Man, just kept in a drawer all those years. How odd, but super cool you were able to pick it up and share it with us.
All the best, Gents.

- I'm also making videos mainly for my own enjoyment, but hey, maybe you might want to check them out: https://www.youtube.com/channel/UC4-9gp ... C1dSyPX0w/
Top

You can't go wrong with a brown bag MRE (unless its stank, then maybe not quite as much lol). Great look into the MRE, thanks for sharing!
Top

Good review, thanks for sharing! This menu brings up lots of good memories. It was one of my favorites at the time (when they were only a few years old).

Thanks for giving it a try!
Top

Oh man, that "brownie" looks like a brick! Kinda reminds me of those chocolate First Strike bars, but at least those are edible.
You are my rock or something.
Top
Post Reply
6 posts • Page 1 of 1