What does the crescent moon mean?

What does the crescent moon mean?

Cases relating to the Department of Defense. 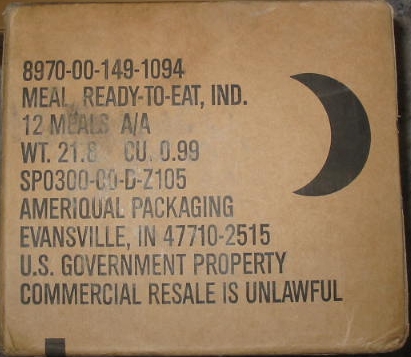 whether they be MREs, MCWs. FSRs, UGR trays, old MCI's, even some non-food related cases too if I am no mistaken have the crescent moon on the side of them. What purpose does it serve? Why a crescent moon? Why not use some standard government seal? It seems odd for the United States to use a crescent moon, it seems that is more up Saudi Arabia's or Pakistan's alley. Unless...

Good luck and may your rations stay unspoiled!
Top

there is an older thread with some explanations viewtopic.php?t=229
Top

Huh, so the Blue Oyster Cult invented the croissant, modeling it after the harvest moon?

Pretty interesting thread I do say, however it didn't shed as much light as I hoped it would have.
Good luck and may your rations stay unspoiled!
Top

Hmm, it seems like the pdf's that other post linked to to explain it all are no longer there. This quote came from Luther Hanson, curator of the US Quartermaster Museum:


The history of the crescent has a wide and varied history. The crescent has been used as a symbol of plenty by the Babylonians to the Romans. The crescent became the symbol of Diana the Goddess of the Hunt by Roman times. The Islamic Armies did not take it as their symbol as a crescent and star till 1453 when they took Constantinople and were pushed out of Western Europe. From 1525 to 1686 the Islamic Armies of the Ottoman Turks continued incursions in to Western Europe and gained access as far as Budapest and Vienna but were continually repulsed. Legend has it that during the last attack on Vienna in 1686, the Turks left behind some of their daily ration in the shape of the crescent. This crescent bread was made and eaten to remind each soldier they were fighting for Islam. The bread was found by the Viennese bakers who adopted the shape for some of their bread as a symbol of defeating their enemies.

One hundred years later, Napoleon invades Austria and adopts the crescent bread for his soldiers and brings the shape to France where it becomes the Croissant and shape for the symbol of rations. The US Army adopts the symbol of the crescent for the Commissary Corps during the Civil War and it is also used for several army Corps symbols at that time. By WWI the crescent is found on all Commissary Rations and the symbol becomes an international symbol of food and rations for all allied armies including British, French, and US armies. By 1947 and the formation of NATO, the Crescent along with 9 other supply symbols become the international symbol for food in the Allied Armies of Europe. It continues today to be the symbol most identified around the world for food and subsistence not just for armies but also for civilian relief and assistance missions.