I found these Hooah Bars on us cav's website and I could not remember which MRE's they were in or if they ever were. I thought I saw somewhere that they were but I might be mistaken.

Also was wondring if anyone has had them. Are they worth it?

I don't rememer the years right off-hand, but they did used to have the Hooah! bars in MREs. They even had them in the First Strike Rations up until they renamed them from Hooah! bars to First Strike! bars.

As for the taste, I'd say they're about like any other powerbar out there. If you can get them cheaper than any other kind of powerbar and you like them, I'd say go for it!
Top 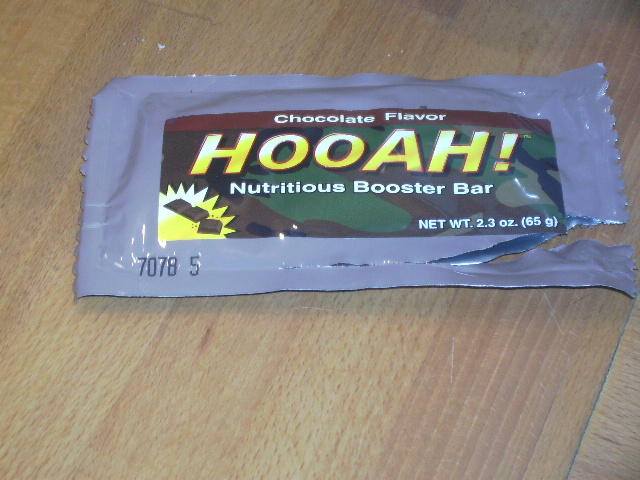 i imagined a lot more from the HOOAH bar. i ever thought COOL COOL COOL - but when i tastet it it was not that good i exeptet.

They sell them even in the commisaries (PX exchanges...) but is not like the one from USCAV....
"Live long and prosper..."
Top

Here's an old thread on another type of nutrition bar which is a derivative or just a re-branding of the Hooah bar.
viewtopic.php?t=1143

Hooah bars are a commercial product. You can check out the available online sites at http://www.hooah.com/order_online.html and compare the pricing.


wstrnsky wrote:I found these Hooah Bars on us cav's website and I could not remember which MRE's they were in or if they ever were. I thought I saw somewhere that they were but I might be mistaken.

Also was wondring if anyone has had them. Are they worth it?

I bought a bunch (about 45-50) of Hooah! bars that seemed to be a test run, or at least they were a pre-production run. They are all Peanut Butter flavor and have the same labeling as the one pictured above, but there is no date stamp.... oh, and the label is a color laser-copier paper label on the front and back.

They're pretty good, too!
Top

Well I'd like to offer a bit of info on these. I do remeber these came out on a test run of some sort back in 2000. I was at Ft. Lewis ,WA going through officer field training and remember some of the Infantry officers having these and letting us cadets have one or two when we did something cool or right. These were named "hooah" back then but the labels were much different and it wasn't like the ones being offered by US CAV. They were more like the ones you get in the MRE's with the fancy colorized labels. Back then I thought they were okay, they tasted exactly like a powerbar but kind of sat in your stomach like a lead weight and you needed to drink a lot of water to help digest it.

If not, boy....you pretty stopped up.
After 2000 I didn't see them as much until about 2004/05 when some resurfaced again in Iraq. I still think Natick could come up with a better tasting bar.
Top

Are these Hooah Bars you guys talking about look like a slab of caramel and are chewy in texture or are they the ones that are dry and kind of bland? If they are not the former could someone tell me what they call the former as I would like to buy some. Thank you.
Top
Post Reply
21 posts